No Nuclear Dump - Message of Congratulations from Cumbria to Nevada 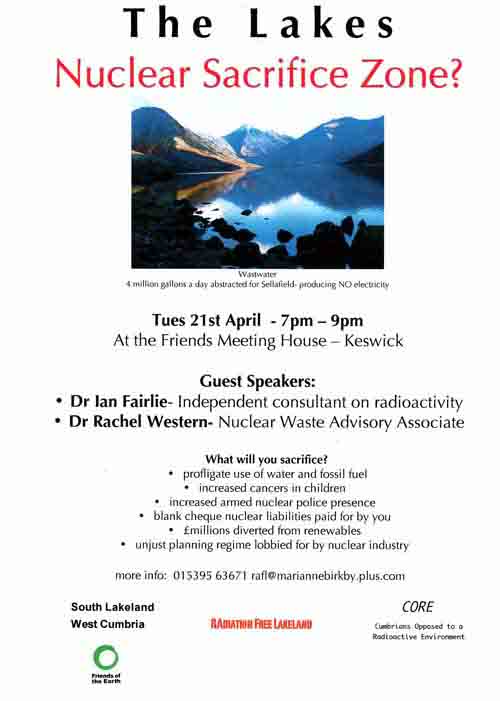 In January Marta Adams –the Chief Deputy Attorney General at the Nevada Attorney General’s Office spoke on Radio Cumbria urging Cumbria County Council not to rely on
information from Government and the nuclear industry but to take
independent advice on the implications of a nuclear dump in the Lake District.

Legislation in 1982 said that the USA should have a permanent store
for radioactive wastes from its military, research, power and medical
activities . Several sites were identified as possible locations for the dump, but a
Congressional vote directed the Department of Energy to focus on just one: Yucca Mountain. The Decide, Announce and Defend politics of expediency relied on Nevada desert's low population and political vulnerability. But a powerful and vigorous 20 year campaign arose from Nevada state authorities to block progress. A spokesperson from Radiation Free Lakeland said “this contrasts starkly with our Cumbrian Council Leaders who have willingly offered the
Lake District up as a nuclear sacrifice zone despite geological ‘disposal’
being the worst possible option for looking after nuclear waste”

A 229 point petition with evidence from scientists and geologists was presented to the Federal
Government on 19th Dec 08 it included: “Nevada has a strong interest in
protecting the health and safety of its citizens from radiological injuries and in protecting its
lands and groundwater from radioactive contamination.” Nevada Senator
Harry Reid, who has been the most prominent anti-Yucca figure over a
two-decade campaign wrote on his website that he "couldn't be happier for
the people of Nevada" The fight isn't quite over for Nevada but it is looking good following President Obama's withdrawal of support for the Yucca Mountain nuclear dump. The fight for Cumbria is just beginning. The UK's centralised and controlling government have bought off Cumbrian leaders. To say the battle is unjust is an understatement.