Many of the world's billionaires have derived their gold bullion from
the blood of innocents. 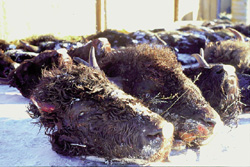 St. Louis Rams co-owner E. Stanley Kroenke acquired the 514,000-acre Douglas Lake Ranch in British Columbia, Canada from MCI for an estimated $68.5 million. Kroenke also owns 600,000 acres of cattle ranches in Montana
and Wyoming. The owner of the most acreage in the US devoted
to raising mammals for murder is Ted Turner with 2 million acres
of bison ranches in 10 states.

Kroenke is chairman of THF Realty, a developer and owner of numerous shopping centers, office buildings and industrial projects around the country, including Wal-Mart development. He is also owner of Denver-based Kroenke Sports Enterprises LLC, which owns the Pepsi Center, the Colorado Avalanche, the Denver Nuggets, Colorado Mammoth, and the Universal Lending Pavilion. He also has ownership interest in the Colorado Crush and Denver's Paramount Theatre.