August 1st 2009 sees the official launch of Northern Indymedia by the alt-media monkeys of IMC Northern England. Having revived the dormant IMC Leeds/Bradford and merged with IMC York, the collective is officially launching their new site as a news resource for all those seeking a better world in the grim north and beyond. 9 Months of hard work are culminating in the public unveiling of the new site at Hyde Park Unity Day in Leeds, where there will be a solar powered "Be the Media" centre provided by the collective. The pitch will also include members of the Climate Camp Yorkshire neighbourhood who are helping to launch "The Great Climate Swoop" on the same day. Full coverage of all the goings on will be put up on the new site: 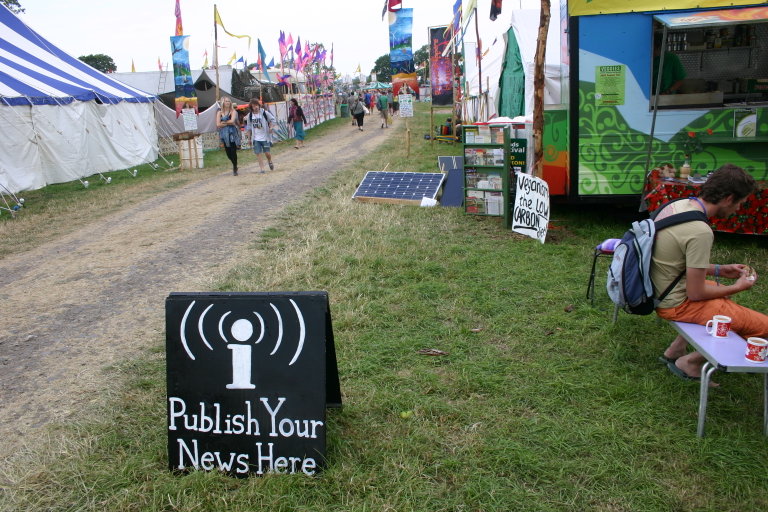 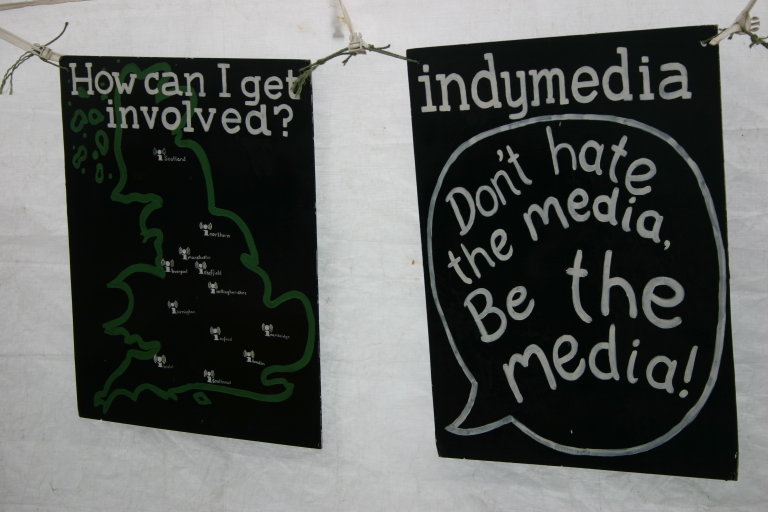 To celebrate the launch, here is a brief rundown of where Indy in the UK has been, where we are now and where Northern Indymedia is planning to go:

Where have we been?

The global anti-capitalism protests on June 18th 1999 saw the first co-ordinated attempt by DIY media groups to provide rapid reporting of large scale events both in London and across the globe. With London acting as an international media hub. This DIY media reporting concept was taken a stage further during the large-scale mobilizations against the World Trade Organization in Seattle in November 1999. While the actions were again global, the Seattle 'Independent Media Center' (IMC) concentrated on providing a wealth of Seattle reports in all formats through the innovative use of a completely open publishing system. This allowed anyone with Internet access to upload either text, still images, audio or video files directly to the reporting website. With the actions spanning several days people could directly communicate and record their experiences on to the website, building not only one of the most complete records of political dissent ever, but also providing a valuable voice amidst all the chaos and smoke; in a few days the Seattle IMC site had received over 1.5 million ´hits´ from around the world.

After the anti-WTO actions in Seattle in 1999, several other IMCs were established in the US using the Seattle IMC as a model. On May 1st 2000 the name Indymedia moved across the Atlantic to London, establishing their own open publishing site running on Active Code as part of the global IMC network, and began to report on other actions in order to make visible some of the events and issues which are usually suppressed by the corporate media.

By 2003, there are more than 100 IMCs on all continents. All working together; building new alliances; and creating their own sustainable global independent media network. Apart from physical meetings at a local level, the global IMC network is based on openness and broad participation: all software is Open Source, most lists are publicly archived, everybody can sign up to the twiki, log-on in chatrooms, or publish on the newswire.

After a few years of collaboration between alternative media group around the country it was obvious that a countrywide Indymedia Centre had to be based on a network of local IMC groups. This decentralisation of the UK network expanded those involved in the project covering Manchester, Lancaster, Leeds/Bradford, Sheffield, Liverpool, Bristol, Cambridge, Birmingham, Nottingham, Oxford, South Coast and The West Country. At this point IMC UK became IMC United Kollektives, holding regular meetings face to face and online. The main website migrated to a new system: MIR, that enabled the local collectives to work together on their own autonomous sites and collectively run the main IMC UK site based on a shared database. Some UK IMC's set up their own websites to give a voice to people in their local areas, such as York and Scotland. The UK site was one of the first attempts in the Indymedia project to run a portal site feeding local news to a wider audience.

In 2008, having gone through the new IMC process, IMC London launched their new website based around a content management system known as "Hyperactive", which took the project a stage further in the new world of web 2.0 and interactivity on the internet. This allowed groups to collectively publish their news, videos and events and use a range of new features which meant that during the G20 protests in London on 1st April, 2009, the worlds focus was once again on Indymedia. Using new technologies such as twitter and the abundance of cameras that are easily accessible to people on their phones, the timeline of events on the London site was continually updated to give up to the minute news as the day developed.

Following the UK Network meeting held in September 2008 at the Common Place in Leeds, a number of people involved in the host venue discovered that the previous Leeds/Bradford site had fallen into disuse for several years and pledged to revive it. Regular meetings were set up and news content began to arrive back at the site. It was decided by this new collective, in consultation with a wide range of groups in the area, that the most positive way to revive interest in Leeds/Bradford Indymedia would be to relaunch with the remit of filling in the gaps of coverage that people were asking for, thus the concept of "Northern Indymedia" was born. After much discussion and time spent looking into alternative projects, it was decided to build a site around the same content management system as IMC London and to go through the new IMC process as IMC Northern England.

Where are we now?

The official launch of Northern Indymedia on August 1st 2009 represents the culmination of 9 months of meeting, organising, scratching of heads, photographing, videoing, website-building, cake-eating and general good natured collaboration with a diverse collection of people. Through the new tools now available such as the IMC Northern England area of Crabgrass and the tried and trusted staples of the imc-northern mailing list and Internet Relay Chat (IRC) Room, the collective have built the new site at northern-indymedia.org and put in place a new mission statement and set of editorial guidelines around which to build a community newswire which will hopefully last well into the next 10 years of global Indymedia coverage of grassroots activists and events.

At Glastonbury festival 2009 the collective set up their first "Be the Media" centre in the Veggies Catering Campaign Cafe with the kind help of members of IMC Nottinghamshire, as a precursor to todays launch at Unity Day, Leeds. This was completely solar and pedal powered as a commitment was made by the collective to reflect the need to provide a service in an environmentally sensitive way in contrast to the corporate approach. Our stall at Unity Day, here by invite of the organising collective, will include 300W of solar power, vegan cakes and a more than healthy dose of positive media activism. Space will also be provided at the Northern Indymedia pitch for members of the Climate Camp Yorkshire neighbourhood to launch the beginning of "The Great Climate Swoop" campaign which will see members of the public voting on whether a mass direct action should be held at Drax or Radcliff power stations on 17th October 2009.

Where are we going?

Looking forwards to the near future, the Northern Indymedia Collective have several exciting projects up their sleeve. There has been discussion of a Radio project, possibly linking up with existing projects around the country such as Dissident Island and Riseup Radio to provide a unified and regularly available alternative radio station that would be broadcast on the internet and possibly over the airwaves. IMC Northern England have already set up a streaming radio server and now just need the words and energy to fill it, both of which are rarely in short supply.

There has been talk of a monthly print version of the site, taking the form of a zine, being distributed in the areas around the north of England in order to make the centre accessible to more people, particularly those who may not have access to the technology needed to view the website. People have already offered to help distribute this should it happen, all that is required is enough people being excited enough about the various projects to publish their news with us.

Work needs to be done to reach out to more non-english speaking communities, of which there are many in the North, to give them a voice where they previously may have had none, or had their voices distorted by the mainstream press. The new site of IMC Northern England will allow us to give people the ability to help translate the site into as many languages as we can. This may be a slow burner but the intention and motivation is definitely there.

Following on from the "Be the Media" centre at Unity Day today, things are going to get bigger and better for this years Climate Camp and beyond. Following talks with the site crew for the Yorkshire neighbourhood, we are planning to take a van load of equipment down to this years camp and are going to be providing the bulk of the campers' provision for publishing their news and stories, as well as contributing to the camps official documentation team in any way we can. We will also be running workshops on citizen journalism and Indymedia and spreading the word about this important global resource.

We have pledged to hold our meetings as far and wide in the North of England as possible, whilst still allowing it to remain a project which is based on face to face interaction. We have recently held meetings in Bradford and Scarborough and imminent meetings in Manchester and Newcastle are in the pipeline. The most important part of this project is getting our message out (and yours) to as many different groups in as many different places as possible and making sure that people know that it is easy to get involved. For this reason, the last part of this feature is a callout to all individuals and groups in the North of England who are working for radical and grassroots change for the better. If anyone would like to know more, hold a meeting, contribute some time or skills or just generally chew the cud with us, we invite you all to join our mailing list, get involved in our day to day stuff on our Crabgrass group or set up a group on our site and BE THE MEDIA!

We look forward to seeing you all at Unity Day