For the past two weeks Scottish Woodlands and others contracted by Scottish Coal have been devastating parts of Mainshill Wood, those beyond the Solidarity Camp. Plantation forest is being felled at an alarming rate, with massive harvesting machines and JCBs tearing up more of Scotland’s countryside. Scottish Coal is establishing its own site, south of the Solidarity Camp and right in the middle of Mainshill Wood. Your solidarity is urgently needed – this work must be stopped. 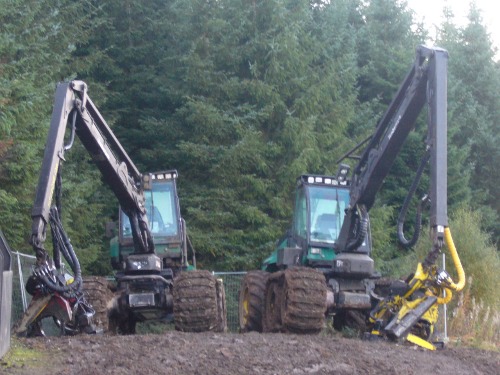 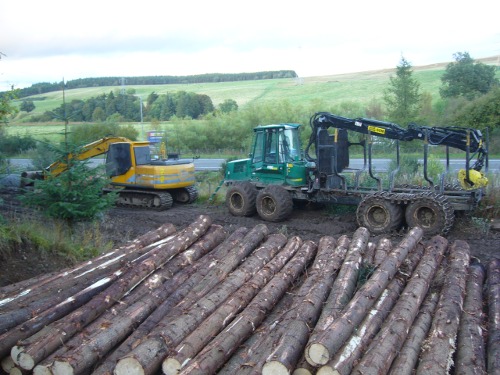 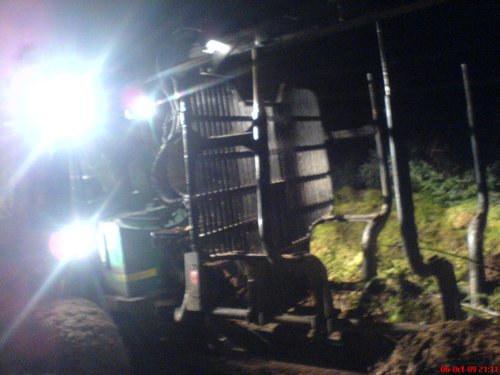 Machines stopped from felling at night 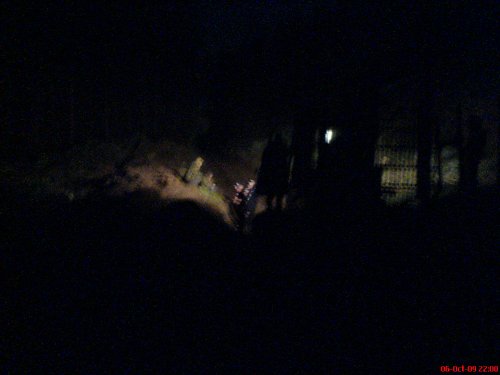 Getting a telling-off from the police 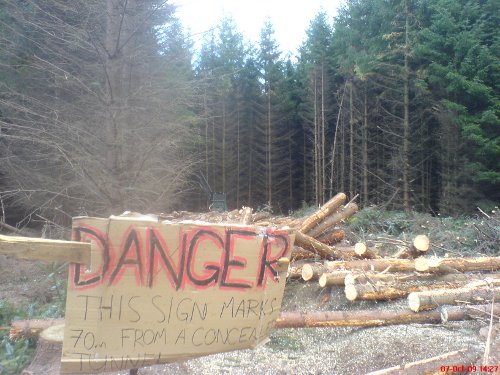 An anonymous communique was received after three of the four large pieces of harvesting machinery on site were sabotaged in the early hours of Thursday morning. Work is on-going round the clock, but did not start until 4 or 5pm on Thursday, being delayed for many hours. The communique reads:

“On the morning of Thursday 8th of October three heavy vehicles had their locks glued. These vehicles belong to Scottish Woodlands Ltd, who have been subcontracted by Scottish Coal to clearfell Mainshill Wood.

The vehicles damaged have been working to prepare the Mainshill Wood area for coal extraction. If it is open casted then it will join several other mines in the Douglas Valley, two of which are currently expanding.

Scottish Coal, the land owner Lord Home and the government and more than prepared to sacrifice the health of local communities and environment, as well as contribute to climate change and nearly universal environmental degradation for wages, bonuses, targets and profits.

This action was taken by a group of autonomous people in solidarity with all those who oppose the development of Mainshill Wood into an open cast coal mine.”

On Tuesday night at around 9:30pm, long after it had got dark, residents of the Solidarity Camp suddenly realised that a massive harvesting machine was cutting through the last line of trees separating the camp from the rest of the site, dangerously close to where people live and were sleeping, both in treehouses and tunnels.

Residents quickly surrounded the machine, and tried to explain that the driver was putting people’s lives at risk. The driver, breaking the companies own health and safety regulations, continued working despite people being within metres of the machine. At one point the saw blades on the end of the harvester’s arm were swung within a metre of a resident’s head. Eventually after much shouting and whistle-blowing, the harvester was chased back to the access gate.

Shortly after, another piece of heavy machinery that collects the felled trees tried to make its way up the access path, but was blocked by residents of the camp. The driver refused to stop and kept moving towards the people blocking its path, and only did when it was clear that the windscreen might be redecorated if the machine wasn’t stopped. One driver exclaimed “I don’t care” in response to a resident shouting “you’re going to kill someone!”, while the second driver at one point jumped out of the cab in pursuit of a resident and shouted “I’m going to kill you”.

That same night, a resident in a surrounding community had called Strathclyde police after a house was attacked with air-rifles. The police didn’t bother to show up. At the Solidarity Camp, however, within 20 minutes two police vehicles and four officers braved the mud and threatened to arrest anyone stopping work, claiming the residents were endangering themselves by coming close to the machinery, despite the fact that the machinery practically came on to the camp! The only compromise was that Scottish Woodlands agreed to stop felling trees at night.

The above hightlights the disregard that Scottish Woodlands and Scottish Coal have for the safety of Solidarity Camp residents (not to mention the health of local communities) and how Strathclyde Police are complicit in protecting property and the interests of private business, and not people.

Your support and solidarity is urgently needed at Mainshill. Even if just for a few hours, people are needed. You can go and stop work for the day, chop wood, build barricades and defenses, or do the washing up. It is impossible to stress how fast the work on the site is happening, and how quickly the area is being devastated.