Ed Miliband meets his followers on the way to 'Hopenhagen'

Ed Miliband MP should have been sent packing in style yesterday, at a public rally jointly hosted by DECC (Department of Energy and Climate Change) and Friends of the Earth in Manchester’s conference centre. Instead, the minister, flanked by his NGO followers, was welcomed by the vast majority of climate campaigners in the audience, on the eve of his departure to Copenhagen. 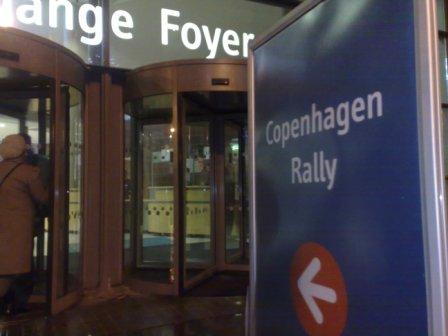 In his talk Ed Miliband placed a strong Deal in Denmark as his number one priority before reassuring the audience that their support for his negotiating powers would ensure the UK’s moral high ground at the UN talks. He congratulated himself for the UK's leadership in the energy and climate debate, backed up by public demonstrations last weekend where the government’s envoy had also been a welcome guest.

There is something Orwellian going on when the government are invited to marches and rallies, which in turn are sponsored by large business corporations. The Co-operative Group, who were also represented on the FoE panel last night, were visibly proud of their new campaign to appear as the supermarket, bank and insurance company of the green movement.

Not all were happy about the new green alliance of government, NGO sector and business that has put a veil over the real antagonisms in society. Climate Campers and other radicals were outside protesting against the planned destruction of Wythenshawe homes to make way for the airport expansion and against a mainstream environmentalism that exploits concerns over climate change for a further agenda of austerity and commercialisation.

In the spirit of the Blackheath Rebels, the John Balls, Wat Tylers and Jack Straws of today rallied against those who see climate change as just another source of revenue. Six hundred years ago ‘Stop the Poll Tax’ rang out on England’s Commons. Today the cry was ‘Stop the New Green Governance!’