Activists shut down extraction on a Peat Bog extraction site by locking onto a lorry and a digger. Work was still halted at the time of writing. 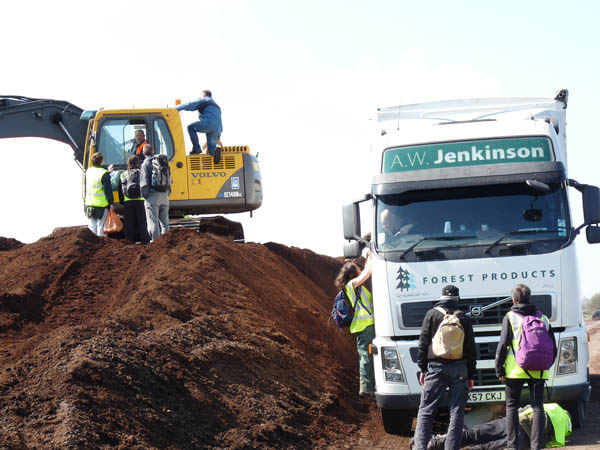 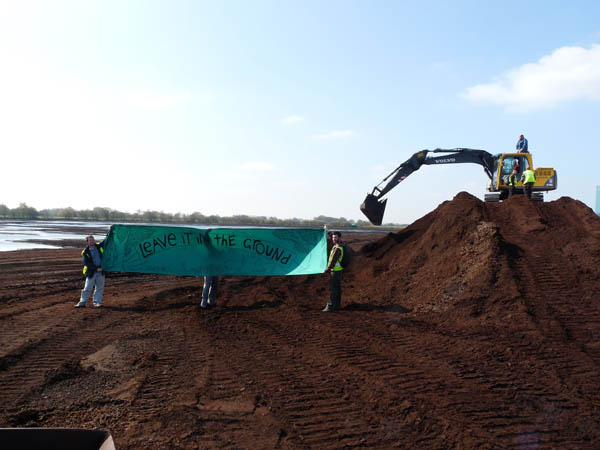 Earth First activists shut down Peat Bog extraction at Chat Moss in Greater Manchester. They entered the site at 10.30 am, locked onto a lorry and digger which was being used to remove peat from the site. As of 2pm two activists were still locked onto the vehicles, with around 5 cops in attendance.

Peat bogs have recently become the focus of international attention because they act as huge ‘carbon sponges’: as peat is formed it locks away carbon that has been absorbed by plants as they grow, thereby helping to reduce the carbon in the atmosphere and slow global warming. The draining and extraction of this unique habitat causes the release of thousands of years worth of stored carbon. Globally, peat bogs cover just 3% of the world’s surface but store twice as much carbon as all the world’s forests combined.

The greatest threat to peat bogs is from peat extraction for use in horticulture. An area the size of 250 Trafalgar Squares is dug up every year for the UK horticultural industry, with 70% of this demand coming from amateur gardeners. This is despite the fact that there are a wide variety of good quality peat-free commercial composts, meaning that there is no need for the UK to consume any peat at all. The Royal Botanic Gardens at Kew, for instance, has been peat free since 1992.
Local campaigner Mary Chapel, said:

“We are stopping the destruction of Chat Moss bog and to protect this site for the benefit of present and future generations. They harbour a wide variety of birds, plants and animals that can be found nowhere else. Instead of protecting this valuable habitat Sinclair’s / Joseph Metcalfe are vandalising it in order to make a profit when there are countless alternatives to peat for use in compost, as well as more sustainable jobs in those industries.”

“Peat bogs like Chat Moss store vast amounts of carbon and are potentially one of our best assets in fighting climate change. The Council tell us they are serious about climate change and the environment yet allow valuable sites like Chat Moss to be bulldozed. They say they will protect the Green Belt but it’s all just hot air. We have come here today in solidarity with the local Save Our Greenbelt campaign, and to protect this valuable habitat and to say enough is enough – leave our bog alone!”

Notes for Editors
[1] Earth First! is a Direct Action protest movement first formed in the UK in the early 1990s against the road building programme and protecting wilderness. Later Earth First! groups took Direct Action against the introduction of GM crops into Britain, and helped mount the campaign to save Thorne and Hatfield Moors, Yorkshire’s most important peat-bogs.

Over 94% of the UK’s lowland peat bogs have been damaged or destroyed, mostly in the last 50 years, and Natural England estimate that 3 million tonnes of CO2 is emitted every year in the UK from our damaged peat bogs – the equivalent to the average emissions of 350,000 households.

Protecting existing peat bogs and restoring damaged or degraded ones could lock carbon in the soil and help to actively reduce the UK carbon footprint, as well as helping to protect many rare species of plants and animals, improve biodiversity and protect a wild and rare habitat.
For copies of Natural England’s report: England’s Peatlands – Carbon Storage & Greenhouse Gases by Natural England.