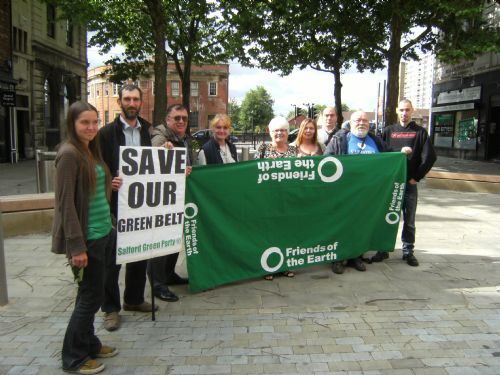 The two defendants outside court with supporters 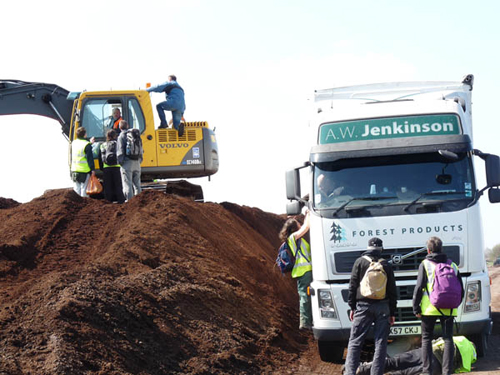 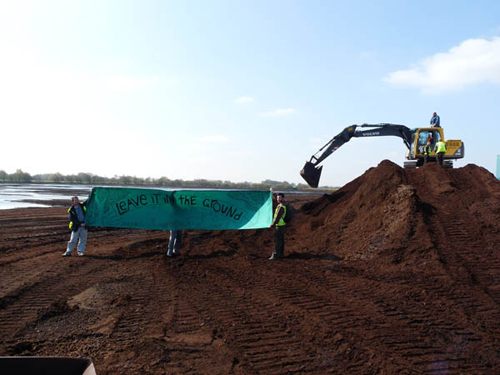 Iain Hilton from Manchester Climate Action and Sonny Khan from Earth First! North West were accused under Section 4a of the 1986 Public Order Act for allegedly causing “harassment, alarm or distress” against employees of Joseph Metcalfe Horticultural Ltd and AW Jenkinson Forest Products Ltd for their part in a peaceful protest on Thursday 15 April 2010.

During the protest, the court heard how Khan climbed up and locked onto a JCB digger to prevent it loading peat into a delivery lorry. Hilton meanwhile scaled and locked himself to the delivery lorry to prevent it leaving the site. The two defendants were protesting against the environmental impacts of peat extraction – which causes 3 million tonnes of CO2 emissions per year in the UK according to Natural England – the equivalent to the average emissions of 350,000 households. [1]

Upon hearing evidence from three employees who appeared in court as prosecution witnesses, the District Judge Jonathan Finestein said that while the protest was “certainly an irritation and certainly cost [the companies] money” he had seen no evidence that the defendants intended to, or did cause harrasment, alarm or distress as the prosecution had alleged and found them not guilty without waiting to hear evidence from the defence.

A request for a restraining order banning the two defendants from peat bog site in Chat Moss was also rejected by the Judge.

The protestors were joined inside and outside court by local campaigners from Save Our North West Greenbelt. [2]

Speaking outside court after the verdict, Iain Hilton said, “We’ve very pleased with the verdict. Our actions were reasonable, peaceful and justified. The entire democratic process of the City of Salford from the Council to local MPs is against peat extraction and have called for it to stop. The people of Salford don’t want the peat to be extracted, so all we did was enforce everyone’s wishes.”

Peat bogs are formed over thousands of years by the decaying remnants of plant matter and actively soak up carbon from the atmosphere, making them extremely valuable in the fight against climate change.

Over 94 per cent of the UK’s lowland peat bogs have been damaged or destroyed, mostly in the last 50 years. The protestors argue that protecting the remaining intact peat bogs and restoring damaged or degraded ones could lock carbon in the soil and help to actively reduce the UK’s carbon footprint, as well as helping to protect many rare species of plants and animals, protecting biodiversity and a wild and rare habitat.

Salford Council agree that peat extraction must stop and are proposing a ban on future extraction at Chat Moss.[3] Planning lead member Councillor Derek Antrobus said: “Curbing climate change is a central aim of the planning system and peat bogland is an important carbon sink. The Government has announced the phasing out of peat for gardening so there can be no justification for its continued exploitation.”

The site at Chat Moss, as well as other peat extraction locations in the area, is owned by corporate giant Peel Holdings, the empire of tax-shy billionaire John Whittaker. Backed by oil money of the powerful Saudi Olayan family, the group variously owns: the Trafford Centre, Manchester Ship Canal and three other ports, four airports and MediaCityUK in Salford, just a few famous names within a huge property portfolio. They also have a large stake in UK Coal, involved in the controversial Carbon Capture and Storage coal power plant proposed in Ayrshire in Scotland, where a direct action campaign is also expected by environmentalists. Peel are disputing the ban, which they claim is unjustified.

Rachel Dawes from Manchester Climate Action said, “Peel Holdings have huge political power in the Northwest. Financial gain is their only interest and this comes at the expense of the environment, locally and globally. Taking direct action is an essential part of the struggle against big business and in situations like this we have to stand up and say enough is enough.”

Hilton added, “The release of greenhouse gases through peat bog extraction has a devastating effect on the world’s climate and the destruction of green belt land is deplorable. These are places that should be enjoyed by everyone and not carved up for the sake of profit.”

Also speaking outside court Khan said, “We’re happy with the support of the local Save Our Northwest Green Belt group. We hope it encourages more people to stand up and take action to stop environmental destruction.”

[2] Save our North West Green Belt and Green Spaces facebook