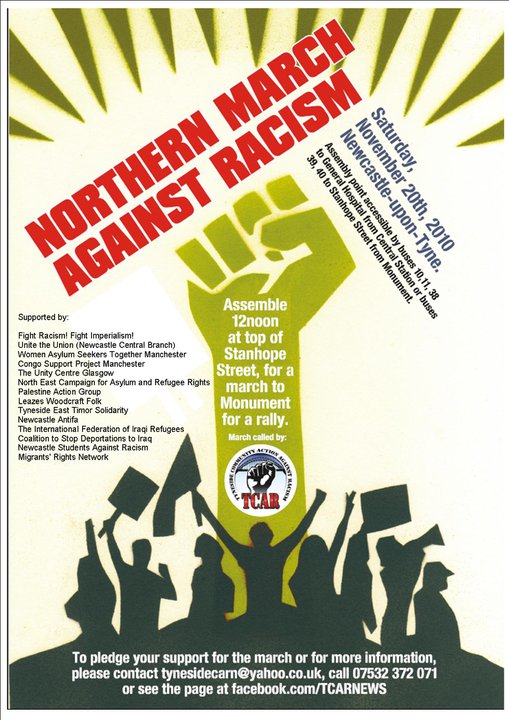 Asylum seekers, refugees and economic migrants are the most vulnerable sections of the working class therefore they have the most to lose with the government’s budget cuts. Thousands are already in detention centres and/or are living in destitution due to the government’s racist immigration controls.

Racism towards Muslims and other Asians has intensified over the last decade. A period which has saw two wars in the Middle East and the media seemingly hell bent on proclaiming all Muslims as "extremist Islamic terrorists”. The knock on affect of this has been the rise of the EDL, a racist group that has lured disillusioned white working class people into their membership by exalting the media lies.

The BNP was successful in gaining votes from voters annoyed at Labour and many countries in Europe now have right wing governments that have used misguided fears and blatant racism to get elected, France for instance has recently seen the banning of the Burka and 1000's of Roma people have been deported.
The need for a counter to this racism is vital. Without a resistance this country will not only continue to but step up its deportation and forced destitution of asylum seekers and migrants, it will further isolate, victimise and demonise Black and Asian people and all sections of the working class will suffer as instead of uniting against the ruling class governments cuts they will be divided by racism

Racism must be opposed; join us on the 20th November
Together we are stronger

Justice for Immigrants! Freedom for Refugees!
Together we are Stronger!
TYNESIDE COMMUNITY ACTION AGAINST RACISM (TCAR)