BAE on the back foot: Student protests against arms trade sweep UK universities

The Ban BAE campaign is getting bigger and has BAE on the back foot as students UK wide organise demonstrations against arms companies on campus! 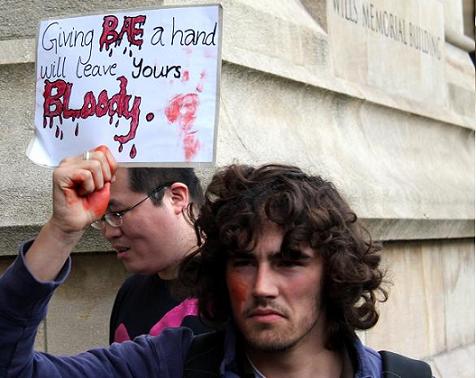 Giving BAE a hand will leave yours bloody

University careers fairs across the UK have seen demonstrations by anti-arms trade protesters in recent weeks as student activists oppose the recruitment efforts of companies like BAE Systems, the world’s largest arms producer.

The wave of recent actions at graduate recruitment fairs in Bristol, Edinburgh, London, Southampton and Exeter saw campaigners staging ‘die-in’ protests in front of BAE’s stalls and being forcefully removed by security staff. Key successes have been; the closure of the careers fair at Edinburgh, disruption of BAE presentations, a turn out of 50 students at Exeter University, a forthcoming discussion at Southampton University on arms companies on campus and we now know that BAE are having to shell out money for extra security at recruitment events.

Campaign Against the Arms Trade (CAAT) are encouraging students to continue demonstrating everywhere that arms traders attempts to recruit – this week students are expected to protest at Oxford University and Kent Universities Careers Fair.

CAAT group has compiled a list for students of 40 careers events this term where BAE or other arms traders will have a presence on various university campuses, including events at universities in Bath, Brighton, Bristol, Canterbury, Cardiff, Edinburgh, Exeter, Hertfordshire, Leicester, Liverpool, London, Manchester, Newcastle, Northhampton, Nottingham, Oxford, Portsmouth, Sheffield, Swansea and York.

BAE Systems has been dogged for years by persistent allegations of bribery and investigated by the Serious Fraud Office for corruption, is keen to recruit university graduates, especially in engineering and sciences. Each year they spend thousands of pounds on recruiting staff to research, design, build, market and sell the next generation of killing equipment.

CAAT’s new Ban BAE campaign is designed to complement the clean investment campaign – calling for universities to divest from the arms trade for ethical reasons – and ultimately aims to sever the links between education and the arms trade entirely.

http://bit.ly/bqGvBV
*Click here to see when one or more arms companies could be recruiting on your campus

1. Campaign Against Arms Trade (CAAT) works for the reduction and ultimate abolition of the international arms trade together with progressive demilitarisation within arms producing countries. Around 80% of CAAT’s funding comes from individual supporters and CAAT is strictly non-violent in all its work.

2. CAAT has released a new action guide for students and activists, Disrupting Arms Company Recruitment, available to download from CAAT’s website, together with a BAE Counter-Recruitment Campaign Pack. Further information on the campaign and the Universities Network is available here. CAAT has compiled an initial list of dates when BAE is visiting universities which is available here. This is not a comprehensive list – check with your university careers service if your university isn’t listed.

3. According to the Stockholm International Peace Institute (SIPRI), BAE Systems is the world’s largest arms producer. It sells arms to countries the UK Foreign Office’s Human Rights report classes as “major countries of concern”. Notable customers include Israel, Pakistan and Indonesia, while its foremost overseas markets are Saudi Arabia and the United States. In February 2010 BAE agreed to plead guilty to “accounting irregularities” in a 1999 sale of radar equipment to Tanzania and was fined £30 million, while being simultaneously fined $400 million by the US Department of Justice for conspiring to defraud the US and for making false statements under the Foreign Corrupt Practices Act.