Successful Lancaster Anarchist Fair - my impressions of the day.

'Lancaster Anarchist Fair' gathered over 100 people yesterday to discuss, eat, plan and socialise. It was good, but also shows the weakness of much contemporary anarchism. 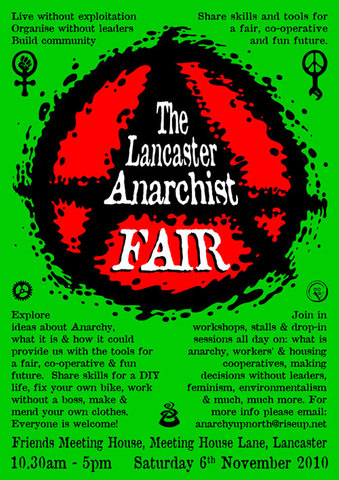 The event was a success - especially in terms of numbers. There were workshops on anarchism and feminism, anarchist moments in history, anarchist responses to the cuts plus skill-shares etc.

But in terms of 'official' speakers, or workshop leaders, it seemed dominated by local green and lifestyle anarchists, who had little understanding of class struggle or that there might be other equally valid kinds of anarchism to their own.

Worse, these 'leading anarchists' often spoke for their whole workshop, providing little or no space for others to participate or offer alternative ideas. The workshop on 'anarchist moments in history' was the worst in this respect. While it was interesting, the speaker spoke for the entire length of the workshop! This monopolisation of discussion was most un-anarchist! Other workshop speakers also laboured their points, patronising their audience by 'baby talking' them through their most elementary points in a lengthly and boring way.

The lowest point was the speaker on 'anarchist responses' to the cuts, who seemed to anger many other participants. She offered no strategy for resisting the cuts - she did not even mention resistance - but said that we all benefit from the exploitation of the third world and need to cut our living standards anyway! She went on to talk about setting up coops etc to replace cut services, in an uncanny echo of David Cameron's 'big society'! Again, she spent ages tediously labouring these mistaken points, allowing not enough time for discussion - although anti-cuts campaigners from the floor managed to inject some sense. Her co-thinkers in the room saw anti-cuts resistance as a diversion from building anarchist coops to make the transition to a low carbon economy, and saw no link between fighting the cuts and fighting climate change. Others protested at this, arguing that the fight to stop the privatisation of forests and the closure of public libraries, etc should also be at the heart of anarchist activity, and that both cuts and climate chaos are cause by capitalism.

Lancaster has seen some of the biggest protest movements for years around the cutbacks. 300 attended a protest here recently. Local anti-cuts campaigners spoke from the floor about how resisting the cuts could radicalise thousands of working class people, and how a defensive movement now around the welfare state could later move onto the offensive against capitalism. It was sad that the organisers hadn't formally invited anyone from local anti-cuts campaigns to participate in this workshop, even though the organisers had no experience in anti-cuts resistance themselves.

The flyer for the event sums up this kind of anarchism, saying the event would be where we could learn how to lead a "DIY life, fix your own bike, work without a boss, make and mend your own clothes".

While this is all valid and good stuff, we notice there is nothing here about 'resisting your boss'. The imagined participants this leaflet reaches out to obviously are not wage slaves or working class people. This is therefore a classic example of 'petite-bourgeoise' anarchism!

Again, the flyer offers us workshops on feminism, environmentalism and coops - but not on synicalism, anarcho-communism, building a radical union, or taking direct action against the cuts. This shows the narrow conceptions of anarchy behind the event.

So well done to the people who organised it - and thanks for the lovely vegan food, etc. Hope these criticisms will be taken constructively, and not be seen too negatively. All in all it was a worthwhile day and I'm pleased I went. Be good (and fun) to have a local bunch of anarchists causing trouble to the powers that be! I will join in! They have orgainsied a follow up event, but this clashes with the local anti-cuts campaigns next big public meeting, which says it all! Doh!