Saturday 20th November will see the Northern March Against Racism 2010 take to the streets of Newcastle. The march has been called by TCAR, and is being backed by a wide range of individuals and over a dozen organisations and trade union branches (see below for details). Join us on 20 November for a powerful show of resistance to all forms of racism. 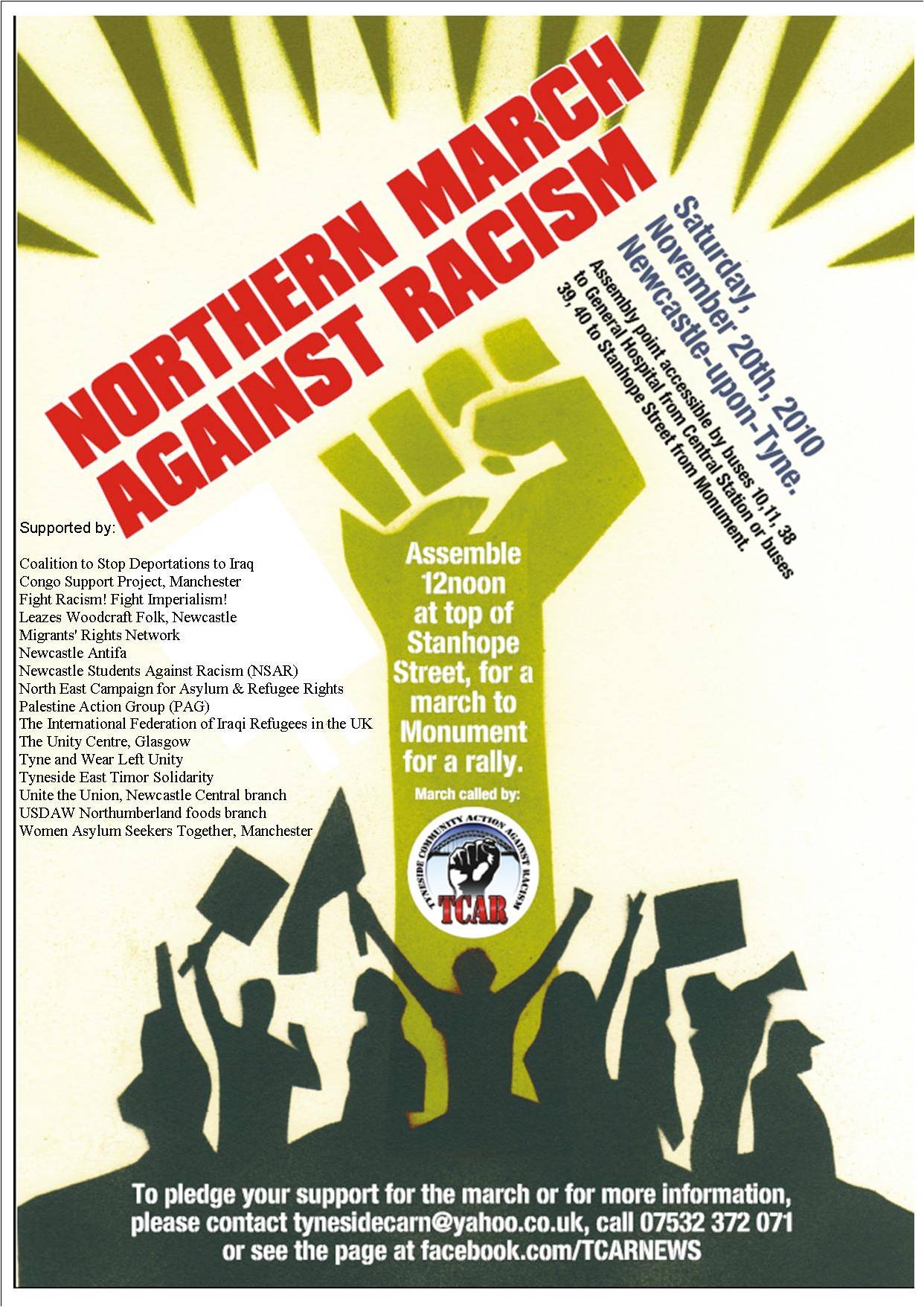 Assemble at the corner of Stanhope Street and Dilston Road in the West End of Newcastle, to march to the Monument for a rally with an open platform for anti-racists, drummers and speakers (including Dashty Jamal from IFIR and a participant in the hunger strikes in Yarls Wood Immigration Detention Centre in 2009, check back for other speakers, to be listed soon!).

Why a march against racism?

Racism remains a deeply entrenched problem in Britain , both at an institutional level and in terms of popular racism. In recent years racism has increased further, with government and media propaganda targeting asylum seekers, Muslims, economic migrants and other black people, blaming them for everything from unemployment to knife crime to a lack of council housing. Racism is also used to justify the state’s actions, from wars in the Middle East to multinational companies’ plunder of resources in Africa and sweatshops in Asia . The government uses racism to distract us from the real reasons for the problems faced by people in Britain and keep us divided, to prevent effective resistance to cuts and unemployment. It should come as no surprise then that popular racism is increasing, particularly against Muslims – as shown by the growth of the English Defence League.

Black and Asian workers suffer far higher rates of unemployment and poverty than white workers, poorer housing and worse educational outcomes. Immigration laws have been used to repress struggles for workers rights, such as those of migrant cleaners in London, while stop and search laws are disproportionately used to target black people, who are more than seven times as likely to be stopped (recent figures suggest this has increased to twenty six times as likely under terror laws). More than 25% of Britain’s prison population are from ethnic minorities, despite offending rates equal or lower than the general population. When black people have come out to protest in solidarity with oppressed people fighting back in poor countries, they have been singled out for intimidation and given punitive prison sentences, such as the Muslim activists arrested in dawn raids after demonstrating in solidarity with Palestine during Israel’s assault on Gaza at the start of 2009. The previous Labour government expanded Immigration Removal Centres (IRCs) and Short Term Holding Facilities to over 3,000 places. Torture survivors and children are routinely detained for administrative purposes. The new coalition government has promised to ‘review’ child detention of migrants but at the same time they have drawn up plans to deport unaccompanied minors back to Afghanistan!

Racism is used to divide us.

Racism is demonising people because of their religion.

Racism is locking people up in immigration prisons just because they aren't British.

Racism is when families are harassed, bullied and attacked because they are seen as not 'from here'.

Racism is dawn raids and deportations.

Racism is using migrant workers as cheap labour yet not affording them the same rights as British workers.

Racism is denying asylum seekers the right to work, dividing them from other workers.

Racism is plundering natural resources in oppressed countries and making profit out of war.

Racism must be opposed; join us on 20th November.

Together we are stronger!

The march has been called by TCAR, and is supported by:

Thanks also to the organisations who have contributed in various ways to the march, but who do not want to be named publicly - you know who you are!

The need for a determined opposition to racism is vital. Without a resistance this country will not only continue but step up its deportation and forced destitution of asylum seekers and migrants, it will further isolate, victimise and demonise Black and Asian people, and all sections of the working class will suffer as instead of uniting against the ruling class government's cuts they will be divided by racism.

Racism must be opposed; join us on the 20th November.

Justice for Immigrants! Freedom for Refugees!
Together we are Stronger!
TYNESIDE COMMUNITY ACTION AGAINST RACISM (TCAR)