Manchester Airport protesters found guilty but vow to fight on

Two climate protesters who blockaded the road entrance to the World Freight Centre of Manchester Airport were found guilty yesterday of obstruction of the highway at Trafford Magistrates Court. The two defendants had pleaded not guilty on the grounds that the expansion of the Airport would have significant impacts on local homes and globally in contributing to climate change - and that their protest was a reasonable use of the road given that other methods of redress had been tried. 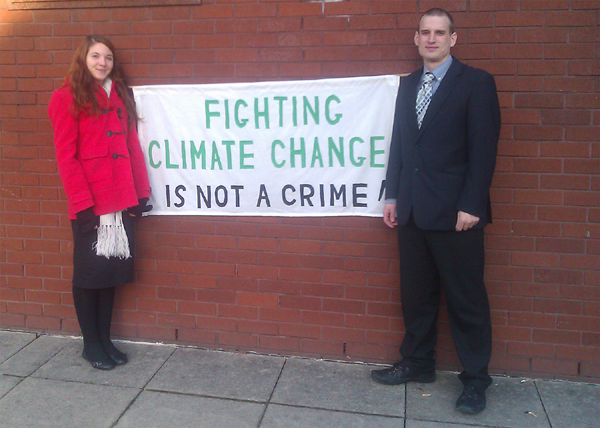 The defendants outside court - 7th December 2010 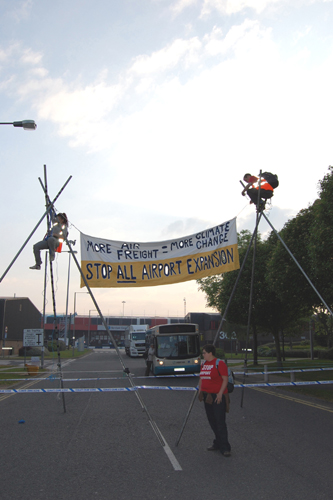 Blockade of World Freight Centre at Manchesrer Airport - May 2010 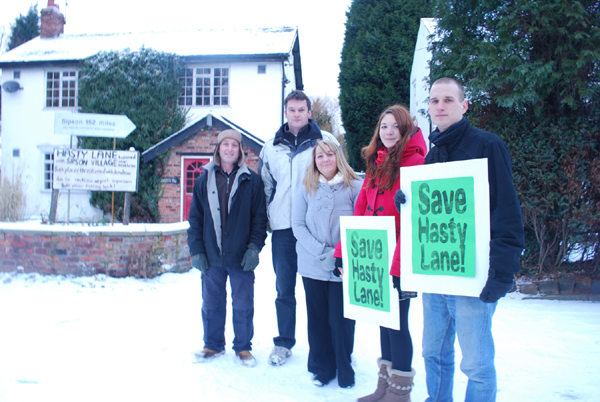 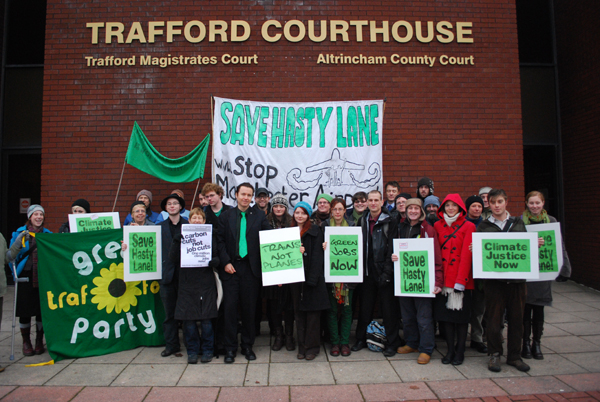 Speaking after the case, defendant Mark Haworth said, “The battle against airport expansion at Heathrow, Stansted and Gatwick was won because ordinary people came together, joined forces and took on the aviation industry. We’ve linked up with residents in Manchester and Heathrow and we’ll continue to challenge Manchester Airport’s expansion plans.”

Fellow defendant Amanda Walters said, “The judge accepted that our concerns were legitimate and that other means of making our views heard had been tried. While the council continues to impose expansion of the airport onto local people, we will continue to fight it.”

A large part of the defence case focused on the ‘reasonableness’ of the action given that other methods of redress had been explored. The witness statements of Lib Dem Manchester Councillor Martin Eakins and Hasty Lane resident Peter Johnson was read out verbatim by the Defence Counsel Richard Thomas.

Hasty Lane is set to be demolished if plans to expand the World Freight Centre at Manchester Airport are allowed to go ahead.

In Peter Johnson’s written statement, he described his efforts to prevent his family home from being demolished, “We are now in a position where help and support from other areas in continuing to oppose the decision means that another route must be used if we are to halt this and/or further expansion already proposed or identified by the airport.”

Commenting on the verdict, Johnson said, “I’m disappointed for the individuals who went above and beyond the call of duty – for a cause we should all be worried about. This isn’t just a matter of concern for those of us living at Hasty Lane – the expansion of the Airport will have effects on the whole of Manchester, and the world too. Sadly, actions like these are seldom recognised as being right at the time, but the fight continues.”

In his statement, Martin Eakins described his close invlovement in the campaign to Save Hasty Lane, including making official representations to the Wythenshawe Area Committee, petitions and letters to national government; “I feel that all democratic avenues were exhausted and I think it is reasonable to say that the only way avenue to achieve carbon reductions through traditional politics in this case was closed,” the Court heard.

Mark Haworth and Amanda Walters were given a fine of £175 an £250 respectively plus were ordered to pay £460 in costs each plus a £15 ‘victim surcharge’ each. On Monday, nine other defendants involved in the protest pleaded guilty and received fines and costs averaging around £340 each.

A public campaign titled ‘Manchester Airport on Trial’ is being run around the court trial and has received statements of support from local members of the public, local groups, academics, barristers, Independent journalist Johann Hari, and prominent national politicians such as Heathrow Labour MP John McDonnell, Green Party MP Caroline Lucas and Conservative Party MP Zac Goldsmith.
You can see all the current statements of support here:

In February 2010, residents at Sipson Village – which was earmarked for demolition if the previous government had pressed ahead with plans to add a third runway to Heathrow Airport – joined forces with Manchester campaigners in a ‘twinning’ ceremony, which joined Sipson with Hasty Lane, a row of houses near Manchester Airport currently set for demolition if expansion plans go ahead.

The trial of a second group who staged an airside blockade of a Monarach Airline jet at the same time as the roadside protest will commence in February 2011. Six defendants will plead not guilty to a charge of the aggravated trespass.