FUSPEY-fun-sustainable-peaceful-existence
FUSPEY is a direction to work toward, individually and as a network. creativity is a very powerfull tool for change, we are trying to use art to communicate and to challenge (in a non-violent way)
a revolution in perception 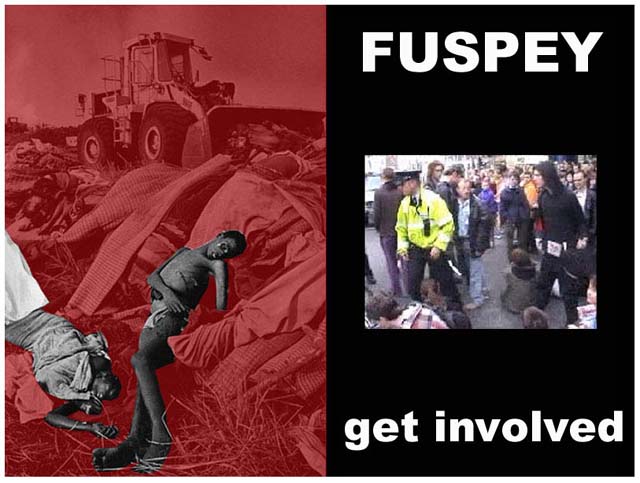 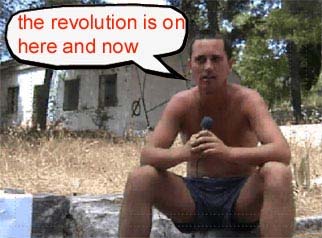 the revolution is on, here and now

1= FUSPEY film 1- get involved
This half-minute film is a rough introduction to the FUSPEY theme It features a very graphic image, taken by the Brazilian photographer Sebastio Selgado, of dead people being pushed into a hole in the ground in Zaire.
The idea being forwarded is that there are many bad things going on in the world today, as a direct result of the unfair social, economic, political systems imposed on the developing world by the WTO, IMF and the world bank
STOP THIS – BY DOING THIS
Millions world-wide are educating themselves, informing others, getting involved with networks and taking action
There are some shots from seattle `99 and from RTS, reclaim the streets, dublin 2001. This event is the direct cause of the word FUSPEY coming into being
Saturday 24th of May 2003- film made

2= the revolution is on, here and now- film 1min 30 seconds
brief summary of FUSPEY idea recent changes in technology and worldview that has resulted in the paradigm shift we are now going through in world history; The next renaissance or even more than that, another major REVOLUTION in perception and action. We are now living in the NETWORK AGE.
recorded outside SAMOGAR ART GALLERY, vis, croatia
as part of EASA 2002 network workshop prototype node in MARCEL network