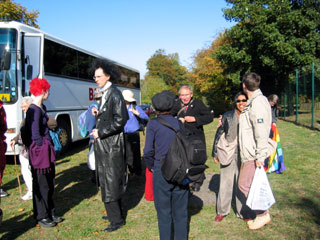 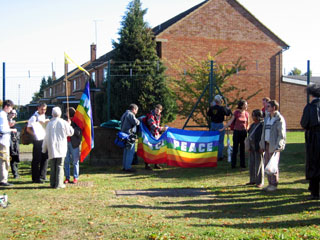 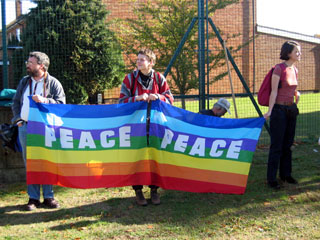 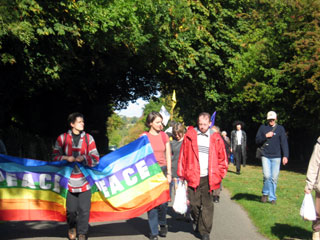 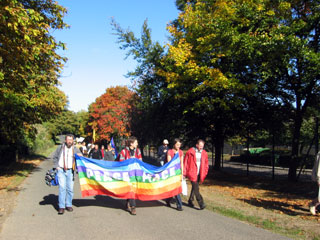 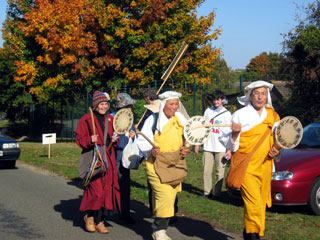 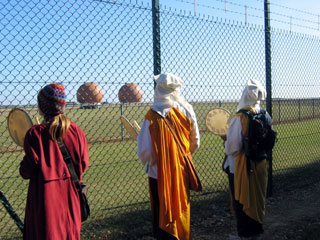 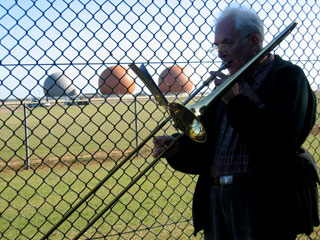 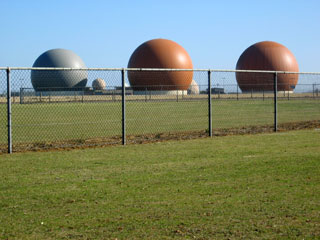 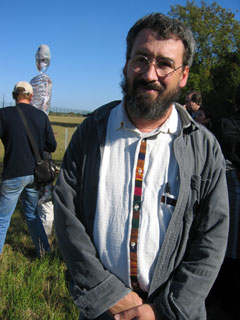 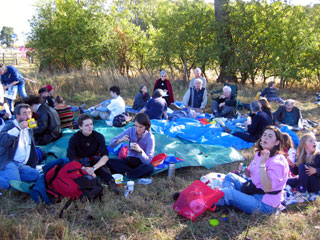 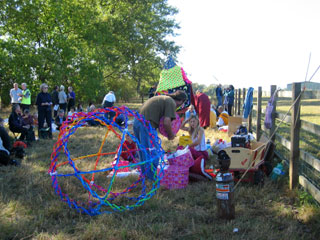 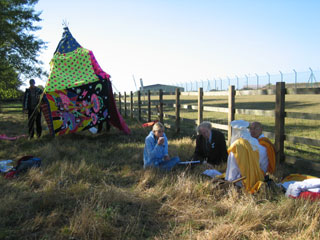 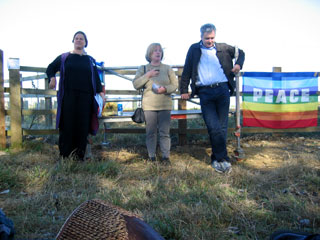 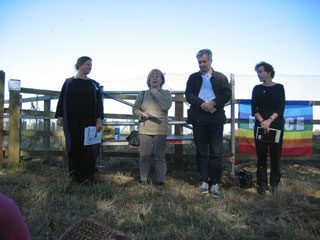 Shortly after 11 am on Saturday 11th October a coach-load of protestors left Oxford for USAF Croughton, a satellite communications base near Brackley, Northants. This U.S. spy base had been chosen by CND and the Campaign for the Accountability of the American bases (CAAB) as the focus for a national day of protest against the US Star Wars project, along with the better-known Menwith Hill in Yorkshire.
On arrival at the base, a group of around 80 to 100 people with colourful banners, accompanied by various musical instruments and chanting Buddhist monks, made their way around the perimeter fence, past the sinister ‘golf balls’ (radomes). On reaching the picnic area we found sandwiches and other refreshments already awaiting us. Nuala Young of Oxford CND then introduced the four speakers: Rebecca Johnson of the Acronym Institute for Disarmament Diplomacy (www.acronym.org.uk), Andrew Murray, Chair of the national Stop the War Coalition, the U.S. activist Brian Teller, and Kate Hudson the new Chair of CND.
We heard alarming accounts of the potential uses of bases such as Croughton for the ‘Star Wars’ project. To quote from the Commission to Assess the US National Security Space Management and Organisation (2001) “In the coming period, the US will conduct operations to, from and through space in support of its national interests, both on earth and in space.”


Background to RAF/USAF Croughton
(sorry, I didn’t get the name of this contributor at Croughton)


This major US Air Force communications base was opened in 1950 to support the permanent return of Strategic Air Command nuclear bombers to Britain. Special facilities now operated from highly secure areas at the centre of Croughton include CIA agent and satellite communications, and the US Presidential emergency radio communications codenamed MYSTIC STAR. Croughton alto provides Atlantic and European communications, and long range radio communications to South Asia., Croughton is also a key link centre for the EC-135 ‘flying war rooms’ based at Mildenhall, Suffolk, as the European airborne command post system. It is a major satellite communications ground station linked to the US Defence Satellite Communications System, and part of a global network of computer data switching centres. It runs a long range radio system for nuclear bombes called ‘Giant Talk or ‘Scope Signal III’. Croughton’s role as a major CIA communications centre (under the cover of the US Air Force base) was identified by former CIA executive Victor referred to a CIA agent radio centre about a hundred miles from London, and near ‘Banbury Cross’. CIA covert communications satellites enable agents or implanted sensors in hostile territory to communicate to US controllers by direct satellite link. An agent’s satellite link transmitter can be carried in a small suitcase; US covert communications links of this kind were used in 1982 by SAS teams operating in the Falklands war. Croughton is directly linked to its ‘annexe’ at Barford St John, a few j west. Staff at Croughton includes both military personnel and ‘civilian’ staff of the Department of Defense, who operate some of the base satellite / communications equipment. Military staff are said not to be permitted to visit the civil section, which is ostensibly part of the US Defence Communications Agency network. The section includes a satellite tracking dish, installed in the early 1 970s, and concealed inside a white radome. US-owned and run microwave communications links converge on Croughton from GCHQ Cheltenham (via
Leafield, Oxon), High Wycombe, (via Upper Heyford), Molesworth and other USAF bases (via Daventry), and Barford St John. The links are all encrypted (encoded), preventing signals from being intercepted and understood by others. This system, called the Digital European Backbone, reached its northern and western limit at Croughton in 1983. DEB’s most important connections go to command headquarters and other communications centres, especially satellite terminals. More than 100 DEB sites have been built, some 12 of which are interconnection points to other NATO or national communications systems. Other facilities at Croughton include the Global Command and Control System for communications with transatlantic and other flights and communications links for the military computer network called WMCCS (Wimex’) - the world-wide military command and control system.