On Tuesday October 28th, Madeleine Albright came to Oxford form a signature session of her new book at Borders, followed by a talk at the Oxford Union. Many actions took place very succesfully; she definitely got the message that she wasn't welcome in Oxford.

Here is a report of what I saw or heard of, and a few pictures I took. 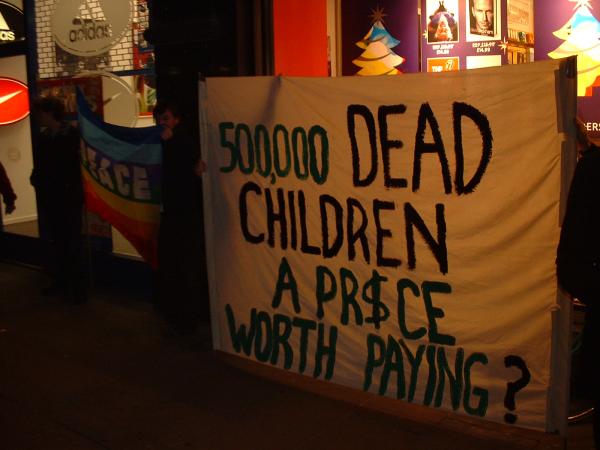 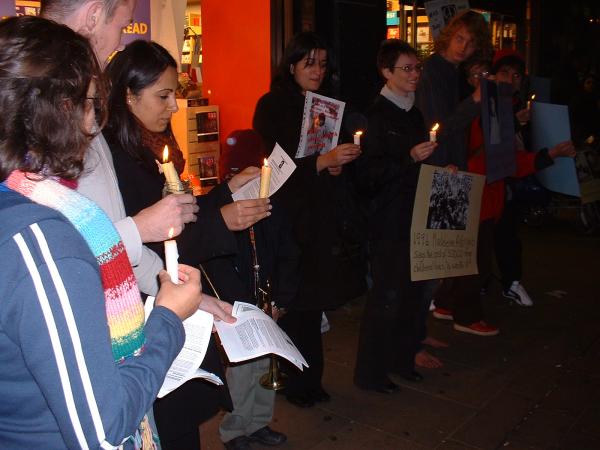 vigil at the entrance 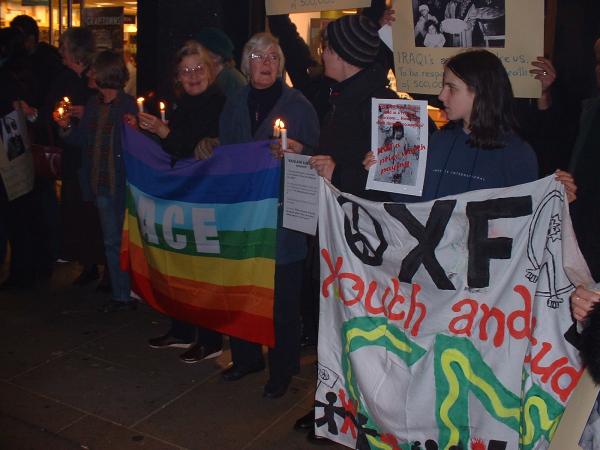 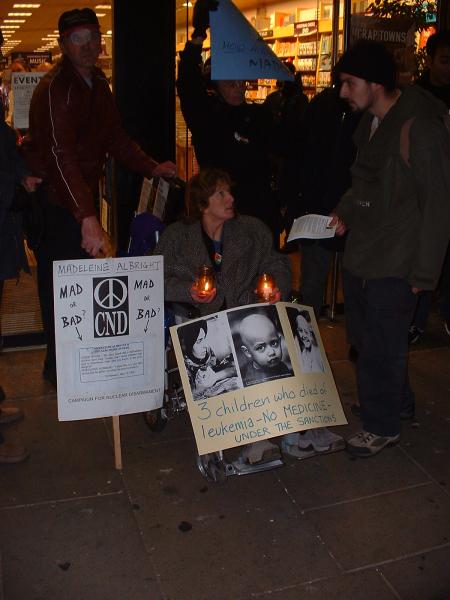 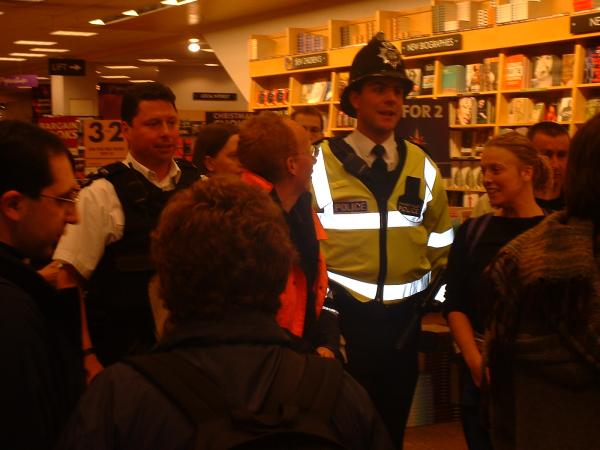 cops accompany protesters out of Borders 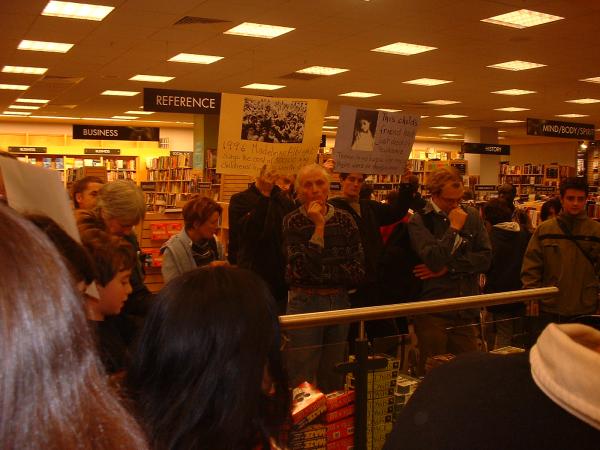 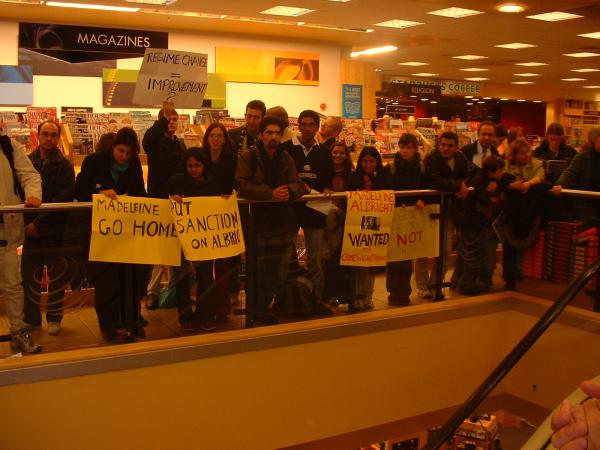 posters and pots and pans inside Borders 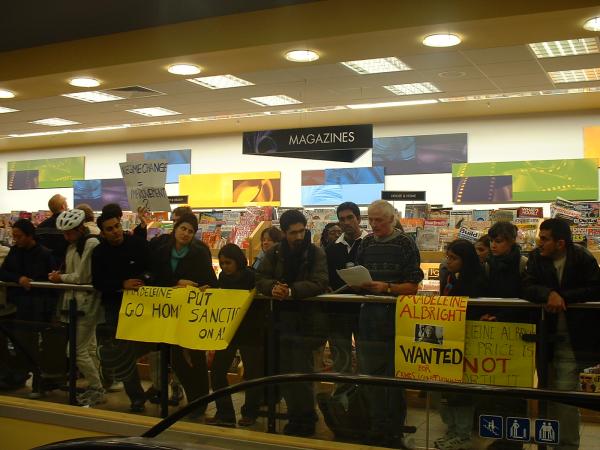 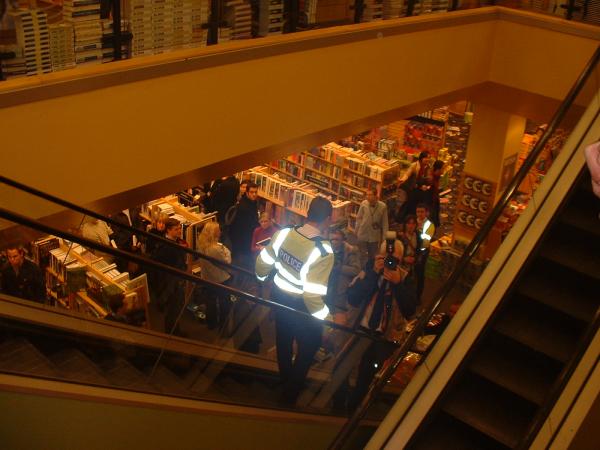 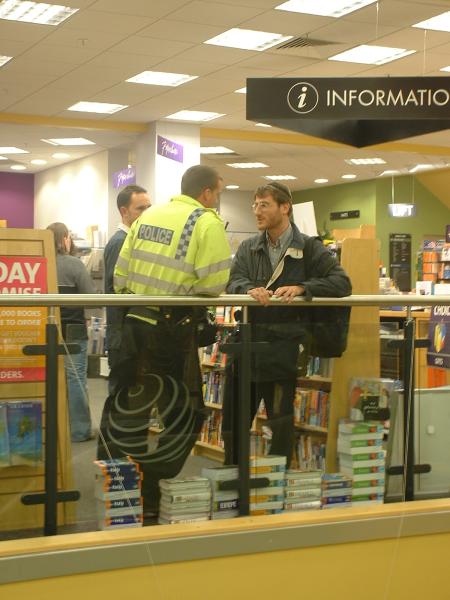 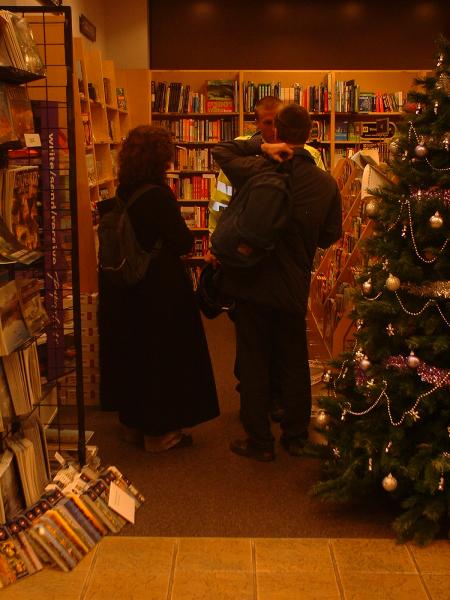 It all started around 5:30pm in front of Borders. The signature session was meant to start at 6:00pm. A vigil was held outside Borders to welcome people going to the session, remembering the 500 000 Iraqi children that were "a price worth paying" according to Albright. Protesters also had many banners and posters and were handing out leaflets explaining why they were protesting against Madeleine Albright. Then protesters went inside Borders. The session was downstairs, and most protesters were refused access to the basement, although quite a few managed to go to the session anyway. Protesters upstairs in Borders read loud radical poetry, shouted slogans, hold banners and made lots of noise and rhythms with pots and pans, all along the session, which finally started quite late, around 6:40, and lasted less than an hour.

Also, at least a dozen protesters managed to get downstairs to deliver their message to Albright in many different ways. We unfortunately couldn't see exactly what was happening downstairs from the ground floor, but as I understood die-ins were staged, with fake blood, and other actions. Many protesters were accompanied out of Borders or upstairs by cops.

Then Albright tried to leave Borders. Many people thought that actions were all over... definitely not! While the session was going on, protesters blockaded all the entrances of Borders to make sure that Albright couldn't leave Borders for her talk in the Union. She tried to leave by a hidden garage, where her car and her officers were waiting for her. But protesters sat down in the street and stopped her from leaving Borders, while dancing at the rhythms of pots and pans... She had to wait in her car for a while, until cops decided to take her out and run through Borders to board a police van waiting for them at the front. But protesters were faster than them and reached the van before it left, shouting slogans and delivering loudly their message to Albright. The van finally left, but when it arrived to the Union, which is very close to Borders, protesters were already there waiting for Albright. When Albright saw that, the van turned back and left probably for a hidden entrance to the Union.

She probably managed to get into the Union, probably a bit late. But many protesters were at the talk inside the Union, prepared to ask her very difficult questions. Definitely it wasn't an easy night in Oxford for Madeleine Albright...


Here is what was written on the leaflet handed out at Borders and at the Oxford Union:

Albright presents herself as a multilateralist, feminist, and liberal icon.

- Stalled deployment of further UN troops in Rwanda and threatened to veto any proposal that would increase UNAMIR forces in the country. 800,000 people died in the ensuing Rwandan genocide (Human Rights Watch).

- Advocated bombing of Serbia in 1999, despite CIA warnings that this would increase Serb violence against Kosovar Albanians. Overrode Colin Powell's reluctance to commit military forces until there was a clear political objective with comment: "What's the point of having this superb military that you're always talking about if we can't use it?" 580,000 people displaced, several thousand killed in the resulting ethnic cleansing in Kosovo; 500 Serb civilians killed in illegal NATO airstrikes (Human Rights Watch).

HOW DIFFERENT IS ALBRIGHT FROM BUSH ?

- Albright criticises Bush for saying: "At some point, we may be the only ones left. That's ok with me. We are America." She advises a more multilateralist approach. ("Bridges, Bombs, or Bluster?", Foreign Affairs, Sept/Oct 2003)

- Albright in office sounded exactly like Bush:
"If we have to use force, it is because we are America! We are the indispensable nation. We stand tall, and we see further into the future." (NBC Today show, February 19, 1998)
"We recognize this area as vital to US national interests and we will behave, with others, multilaterally when we can and unilaterally when we must." (Middle East International (London), Oct. 21, 1994, p. 4)

- Apologises for using phrase "assertive multilateralism": "By this I meant that when America acted with others, we should lead in establishing goals and ensuring success. I didn't in any way rule out the possibility that we would have to act on our own in self-defence or to protect other vital interests - multilateralism certainly has its place as a foreign policy tool, but the term is without appeal - especially to Americans. The word has six syllables, includes some Latin, and ends with an "ism"." (Madame Secretary, p. 176)