After four months of with-holding tuition fees, one month of
suspension, and finally threatened with being denied a degree,
I finally decided to pay up - in pound coins. 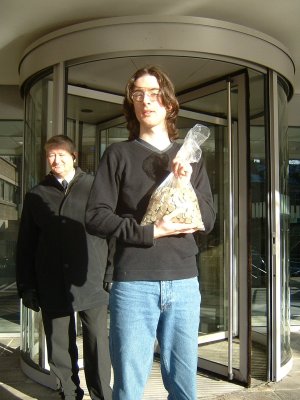 Why I decided to with-hold fees
-------------------------------
Education, just like food, housing and healthcare, is a right, and
we shouldn't be ashamed to say so. Only the rich benefit when more
and more of the cost of this education is passed on to students.
Working class people, already hugely excluded from higher education,
will find it increasingly difficult.

Little by little, all those bursaries, and access schemes, which never
adequately addressed the problem anyway, will be eaten away and eroded.
Fees will rise, a market will develop, loans will be commercialised
and those who cannot afford to pay will be left behind. Meanwhile,
the same template is imposed on the NHS and other public services,
as part of a global drive for privatisation, spearheaded by GATS.

All this could happen, unless we act together to stop it. The students
of Germany are a fantastic example:

Unfortunately, as (I think) the only non-payer in the University,
there was no way I could defy the system indefinitely. So the 1125
pound coins I handed in to the authorities today was a last gesture
of protest, a final attempt to throw sand in the cogs, in this saga

When I got to the University Offices, there were extra guards outside,
and security shields were down - obviously fearing a repeat of this
week's student occupation of the Exam Schools.

Staff were friendly, but refused to comment on issues of tuition
fees or the commmercialisation of education, so while I waited for
the money to be counted, we chatted about innnocuous things like
how nice it'd be if the national currency was chocolate coins ;)

They did seem uncomfortable when I tried to talk about fees, so
perhaps I've made them think a little and reconsider their part in
all of this.

Finally, thanks to all those who came along today to support :)

Call to action
--------------
If many students with-hold fees, even for just a little while, if
lots of students start trying to find awkward ways of paying, if we
combine this with disobedience and action - if lots of student just
resist as much as we feel able to - then we could easily bring all
the Vice-Wossnames, 'Masters', Bursars and Proctors, to their knees.

And if, at the same time, we start taking control of our own education,
moving away from the idea of University as a priviledged portal to
well-paid jobs, towards the idea of an institution of learning for the
sake of learning, open to all, a place where knowledge and skills are
shared freely, then we can play a huge part in creating a freer and
more human society. We can start to make the society of our dreams
a reality.

Sous les pavés, la plage!
(Beneath the cobblestones, the beach!)