Protests win extension of consultation period for Malmesbury and Devizes Maternity Units.
(extension may be 2, 4 or 6 weeks - to be decided) 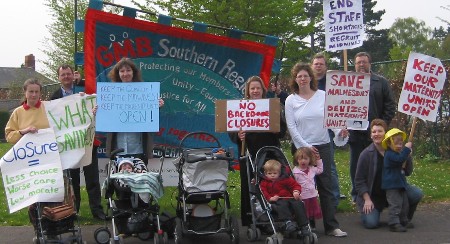 There was a small and lively picket of the health bosses (Primary care Trust) deciding whether to close award winning units in Malmesbury and Devizes on Monday morning.

The campaign raised 10000 signatures recently, and has been pressurising the PCT during all consultation meetings. The PCT have admitted that the financial savings would be due to 11 job losses.

The campaign has devised an alternative plan that would make the units more cost effective by increasing the number of women using them – currently these units are poorly promoted and advertised. This plan was presented to the PCT board by National Childbirth Trust director Richard Hallett on Monday.

Extension of the consultation shows that the PCT are on the back-foot, although it is still too early to say which way the decision will go.