An evening with a Palestinian theme, organised by Oxford Indymedia. A couple of the latest independent films from Palestine and several speakers including members of Oxford's Palestinian community. The friendly and relaxed atmosphere of these regular monthly screenings also provides an excellent opportunity for learning, open discussion and meeting interesting new people. Occasionally there is even food.... 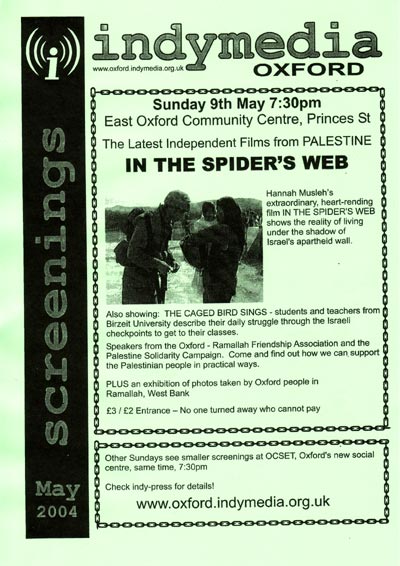 Another 'heroic' moment in Palestinian history

Are you going to be discussing today's cold blooded murder of an Israeli mother and her four children in your 'friendly and relaxed atmosphere'? I suppose this massacre is another victory for the intifada!

This murder, even though disgusting and unjustified, cannot be compared with the systematic policy of ethnic cleansing that Israel is following during the last 37 years. And if you are considering this murder as a form of collective punishment against Israeli people, maybe you can ask yourself who is the one that set first the example.

stop dehumanisation on both sides!

What sort of mother puts her children in that sort of dangerous risky situation?
She may feel she has a point of principle to prove by living in the Gaza but how can she justify exposing her children to that risk?
Shame on her, shame on the cold blooded murderers who committed the atrocity
and shame on you all for trying to score political points from the murders of those poor children.

Its not about scoring political points. If a pregnant woman and her four little girls have bullets pumped into their heads from point blank range, in the name of the cause of Palestinian nationhood. Then not one Palestinian or Arab in the entire world condemns or see's wrong in that action, its entirely appropriate to question that society and whether this is a source of good in our world.

Adam, look at your original comment.
You clearly intended to score political points from the murderous events.
Shame on you.

Today’s killing of a 34 year old Israeli woman and her 4 daughters is
indeed tragic. Of the English language newspapers that I have
checked, it has been reported widely--in the USA by the NY Times, the
Washington Post, the SF Chronicle, the Chicago Tribune, the Herald
Tribune; in England by the Independent, and the Guardian; in Australia
by the Sidney Morning Herald (May 3); and in Toronto by the Globe
and Mail. By contrast, of the above newspapers, only today’s New
York Times reported yesterday’s killing of an 8 year old Palestinian
boy by the IOF. Following this preface are today's Ha’aretz reports of
both events.

Every such death is tragic. But today’s killing of an Israeli woman and
her children has to be seen within the context of the Palestinian child
killed yesterday, of the Palestinian mother of 10 killed last week and of
the statistics that I cited a few days ago: i.e., April saw 59
Palestinians killed and 345 injured. Of the 59 killed, 45 of these were
during 2 consecutive weeks April 16-29, which included the killing of Dr.
Rantisi (April 17). This evening Israel added 4 more to the growing total
of Palestinians killed for May (which has just begun), by executing
them in Nablus in the car in which they were traveling. The IOF was
busy this evening also demolishing buildings in the Gaza Strip and
shooting a missile into the top floor of a 15 story building. Beyond all
this, it has to be remembered that while most Israelis live their daily
lives and go about their daily duties and pleasures (including the Final
Four basketball Tourney), Palestinians do not. They are under constant
harassment from the IOF and settlers; but most of incidents never
make the media.

The way to end violence is not by escalating it, but by trying to resolve
differences via dialogue and negotiations rather than by the use of force.
This, however, requires leaders who care more for lives than for land.
Unfortunately, most Israeli governments, and the present one in
particular, do not meet this criterion. And since violence breeds
violence, we can count on Israeli escalation bringing about the like
Palestinian response.

By Arnon Regular and Haaretz Staff
~~~

a plague on both your houses...

and palestinian mothers knowingly putting their children in danger is completely unheard of???? stop kidding yourselves.