The SPEAK Campaign is calling for the immediate release by Oxford University of two rhesus macaque monkeys. After fifteen years of confinement and experimentation these individuals have known no life outside the walls of a University lab. 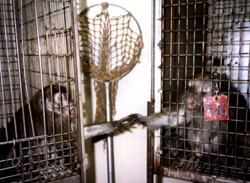 The SPEAK Campaign is calling for the immediate release by Oxford University of two rhesus macaque monkeys. After fifteen years of confinement and experimentation these individuals have known no life outside the walls of a University lab.

The two rhesus macaque monkeys in question have had surgery to remove part of their brains ten years previously when they were five years old. The monkeys were last known to be involved in an experiment funded by the Medical Research Council and conducted at Oxford University and according to research data was exploring reaction to 'visual stimulus'. These two individuals have been given artificially produced brain damage by scientists trying to mimic human brain damage and then set a battery of tests to study their reaction times.

SPEAK campaigns will be holding a demonstration in Oxford on Saturday 15th May to call for the release of two rhesus macaque monkeys who have spent their entire lives inside the walls of vivisection labs. Oxford University is engaged in building a new centre of animal abuse in which even more animals will suffer and die on the alter of scientific fraud, academic arrogance and profit driven blindness.

The new animal torture lab in the early stages of construction on South Parks Rd in Oxford will have a covered bridgeway connecting it to the "notorious" dept of Experimental Psychology. On the upper floors of this building is Level F, the scene of some of the most horrific animal experiments ever carried out in this country. This modern day torture is protected by locked doors and state of the art security hidden from the eyes of the outside world. The two rhesus macaque monkeys imprisoned here should be released at once and be allowed to live out the rest of their lives in an enviroment that will allow them to experience the stimulation denied to them as victims of a flawed scientific practice.

We urge you to come to Oxford on Saturday 15th May and demand the release of the "OXFORD TWO" and SPEAK out against the building of a new animal abuse centre in Oxford. The animal rights movement has defeated Cambridge University and the Government over their plans to build Europe's largest primate lab, together we can halt this expansion of animal terror and strike a blow for animal liberation.

I shall definately be there on Saturday. Im really interested in what medical progress has been achieved with these two monkeys.Its my hunch that very little and possibly, absolutely nothing. Come on vivisectionists...lets move science forward. Im sure noone would want their pet cat or dog to be treated in this way. Fifteen years never seeing daylight; I would definately want to be there if they were released and would thank the vivisectors for doing the right thing. These two deserve some life now.

This is the ideal kind of protest for South Parks road vivisection lab. It is VERY effective. There is always lots of traffic and a pelican crossing in the perfect spot. So far protests there have been rather ineffective but this could change all that.


1) You need at least 20 (40 would be great) people for solidarity and a good party. Make sure everyone knows well in advance to be ready. Wait for a fine spell in the weather and go for it a few days later.
2) Musical instruments and banners so that people can see why your doing it while you have a good sit down and chat/play. Bring food and drink too. Be ready for a couple of hours of hang time.
3) Before hand let the emergency services know what you are going to do so they can divert thier traffic.
4) Also let the press know before hand.
5) Don't do 5pm rush hour! People will get very upset when trying to get home.
6) High noon is a good time any day.
7) If you want to be really on the case get some legal study students to act as wittnesses in case of any Police brutality.
8) When the cops come be very polite and explain that you cannot move on priciple.
9) When they pick you up DO NOT RESIST you have made your point. Some of you may wish to attach yourselves.
10) Have people giving flyers to the drivers and passers by who will be curious about the hold up.