Afghan interim President Hamid Karzai has announced he is standing as a candidate in presidential elections due on 9 October. 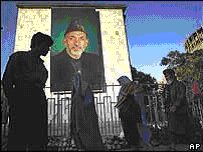 Mr Karzai still struggles to exert his authority over the country 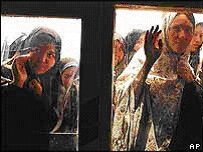 Voter registration is under way, but for many Afghans the priority is security

Monday was the registration deadline for all candidates - at least 20 others are expected to run against him. Mr Karzai hopes Afghanistan's first direct vote will legitimise his rule. His running mates will be interim Vice President Abdul Karim Khalili and Ahmad Zia Masood, brother of assassinated mujahideen leader Ahmed Shah Masood. The powerful Defence Minister, Qasim Fahim Khan, was not named as a running mate, surprising many observers. They say he may now back one of President Karzai's opponents.

Although the final list of candidates will not be published until Thursday, most observers expect Mr Karzai to win easily.

A southern Pashtun leader, he came to office in 2002 after United States-led forces ousted Afghanistan's hardline Taleban rulers. Mr Karzai has faced much opposition to his US-backed administration, and is still struggling to exert his authority across the country. The BBC's Andrew North in Kabul says he is desperate for the popular mandate a nationwide poll victory would give. His interim government has a mandate until the end of this year, and must then be replaced by one that has been elected, not appointed. Our correspondent says Mr Karzai's choice of vice-presidential candidates is aimed at keeping various political and ethnic constituencies happy. Voter registration is under way, but for many Afghans the priority is security.

"I hope the Afghan people will recognise us as a good team and I hope the people of Afghanistan will vote for us," Mr Karzai told reporters. Mr Karzai said Mr Masood, a Tajik, represented a noble legacy in Afghanistan. His elder brother, Ahmed Shah Masood, is revered as a resistance hero - he held out first against Soviet troops, then the Taleban. Suspected al-Qaeda militants killed him just before the 11 September attacks in the US. Mr Khalili, the other candidate, is from the country's Shia Hazara community and another former mujahideen leader.

The October vote - twice put back because of mounting violence - is being seen as a landmark in efforts to build democracy in Afghanistan after years of war. The risk facing Mr Karzai, say some analysts, is of the vote being split and his failing to win on the first round if as many as 20 candidates stand. The best-known candidates so far are key northern factional leader General Abdul Rashid Dostum, and education minister Yunus Qanuni who announced he would stand on Monday. Only one woman is among those who have already decided to run. Parliamentary elections have been postponed until next year for security reasons. Militants have waged a mounting campaign of violence ahead of the elections, much of it targeting voters and election officials.