Seven Oxford activists went to the 3rd European conference of Peoples' Global Action in Belgrade last week. I was one of them, and this is my highly personal, subjective and in all ways partial report. 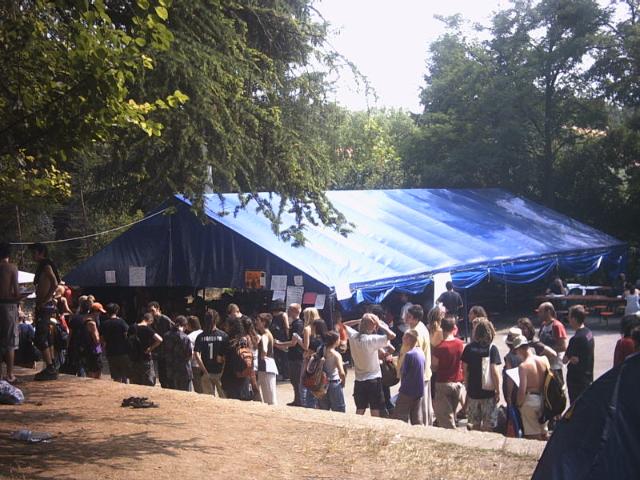 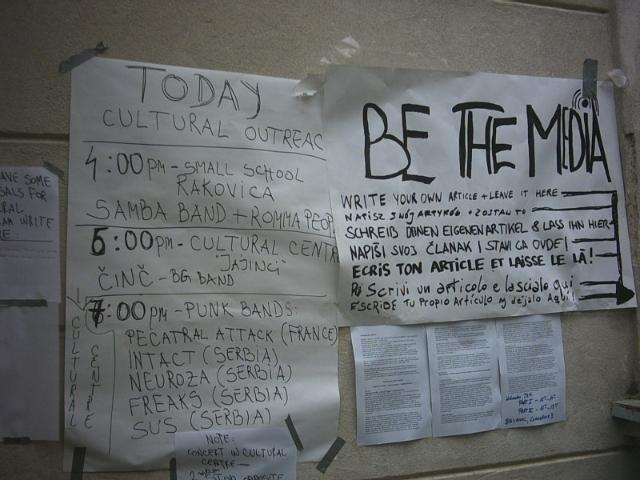 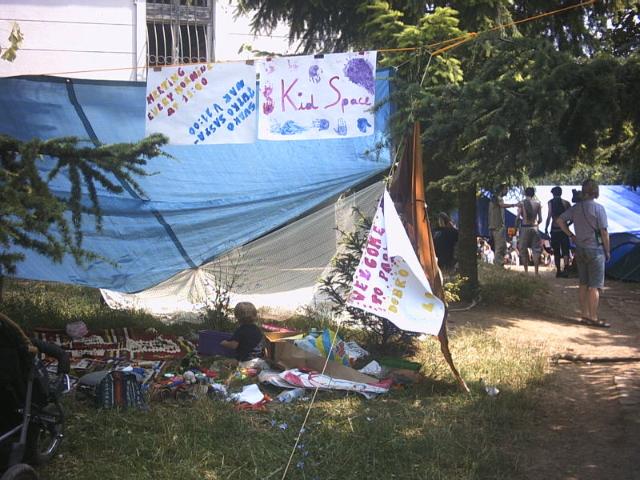 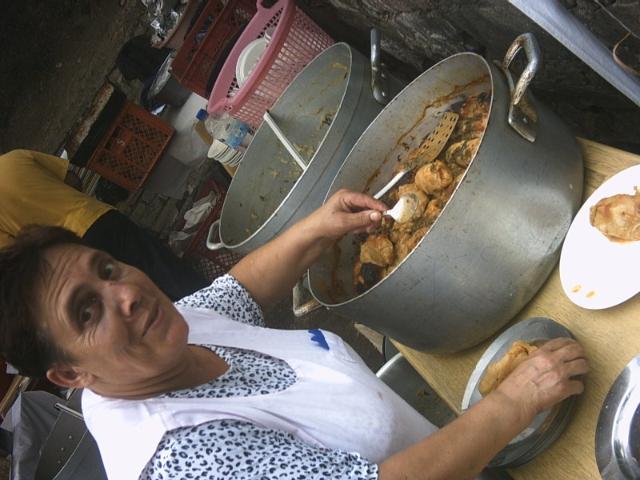 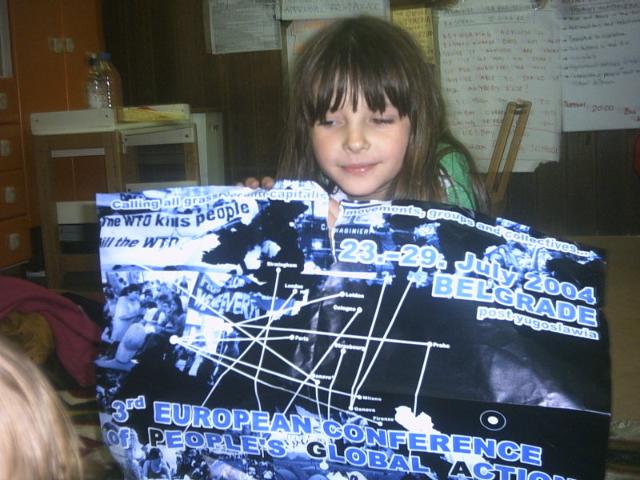 
The PGA is highly relevant to indymedia readers, as its hallmarks (

http://www.nadir.org/nadir/initiativ/agp/free/pga/hallm.htm) form the basis of indymedia's mission statement. Attending this 6-day conference, the third one in Europe, was an experience of such richness I wished I could have done it several times in order to take a different route each time through the action.

It was my first time in Eastern Europe since 1990, and since then “post-Yugoslavia” has suffered the consequences of brutal wars, US sanctions, a corrupt nationalist regime and NATO bombardment. Belgrade's smart boulevards contrast sharply with the wreckage of bombed-out buildings. IMF-demanded “structural adjustment” means that one million out of the Serbian population of 7 million is unemployed. This has led to the growth of fascist groups and parties. The largest party in the latest elections was the ultra-nationalist Radical Party, tipped to win the next ballot. On the other side, there are a range of progressive forces, including the electricity workers and the factory workers, fighting against the privatisation demanded by the IMF, the self-organization of the Roma and other oppressed groups, and the excellent DSM, the post-Yugoslavian anarchist group who convened this PGA conference.

Here are some brief notes reviewing the conference itself.

Having been involved in small affinity groups which successfully use consensus decision-making, I was interested to see if this process of participatory, non-hierarchical democracy could be extended to work with several hundred people. The final plenary of the PGA conference was a perfect vindication of this democratic process, using the “spokescouncil” method. The meeting was divided into affinity groups of 10-15 people, each with a spokesperson, who was the only one allowed to speak in the debate. This was not a retreat into representative democracy, however, because the the spokesperson had at all times to ask his/her affinity group for consensus on a proposal. The spokesperson could also be rotated during the meeting. The method combined maximum democracy and maximum efficiency, and completely refuted the Trotskyists' argument that consensus decision-making leads to paralysis. I remembered reading in “Socialist Worker” that “democratic centralism” was “necessary” because under consensus decision-making, any individual could block a proposal and paralyse the process. Well, one proposal in the PGA plenary was actually blocked, the call for a global day of action in support of the Bolivarian revolution in Venezuela. This in fact led to a much improved re-drafted proposal, which was then passed. Comrades on the socialist left, please note: if it's centralist, it's not democratic, and if it's democratic, it's not centralist. Don't let your mysterious and all-powerful “central committee” tell you otherwise. In fact, why don't you try demanding that you all have an equal say? And see how your self-appointed “leadership” reacts...... The PGA horizontal democracy was a huge contrast to the ESF process currently going on in London, which is neither consensual nor representative, and decisions made by a small cabal prior to the meetings are simply foisted on the committees, alienating and disempowering people and driving them away.

The PGA has since its inception been based around actions, and at this conference there were significant discussions about, among others, "No Borders", what to do to oppose the G8 in the UK next year, how to engage with the London ESF in October, and how to support the Venezuelan social movements during the latest onslaught from the elite and the imperialist forces on their revolution.

My experience was limited to those workshops taking place in the Undercurrents Cinema space. “Queer Serbia” showed three first-rate films on gay pride from across the former Yugoslavia. While the march in Ljubljana had the celebratory gaiety of that in any western European capital, Zagreb gay pride brought out screaming homophobic abuse. Moving further east, Belgrade was worse still, with sickening beatings meted out to participants by facist thugs.
An excellent screening of recent films from Palestine/Israel included an hilariously satirical film by Israeli Anarchists' against the Wall.
“Venezuela Bolivariana”, by conference participant Marcelo of Calle y Media Collective, is one of the best political films I have seen, arguing that the Bolivarian revolution, far from being a nationalist, populist, top-down affair led by a military comandante, is a rapidly radicalising process controlled by the mass movements, and as such needs international mobilization in support. Show this moving and inspiring film in your area!
Gut-wrenching images were seen in the workshop hosted by people from the Asian PGA. The film, “Behind the Open Door”, showed the daily struggle of the lowest rank of the Untouchables (Dalits) in India, who have to shovel shit from waterless latrines, and carry it on their heads. With excellent journalism, the authorities' denials were contrasted with the unbelievably degrading reality and the articulacy of the Dalits themselves.
“Yomango” is a way to sabotageing capitalism while having fun. Compulsive punsters, their name is a word-play on a Spanish department store and the slang for “I steal”. Property is theft, they argue, so this type of hedonistic, champagne-swiping shoplifting is merely taking back what rightfully belongs to us all. In Barcelona they stole (“took back”) a dress and presented it as an art-work in the local museum. Part of the point is the frivolity. They are not concerned with “basic needs”, which would have to be paternalistically defined. But it isn't only frivolous. In Germany, the “Gratis” movement acts for free public transport, and in economically-crippled Argentina they build on the already common practice of tapping electricity, and give it a political definition. They see the Yomango “brand” as a transitional path from civil disobedience, such as Genoa 2001, to everyday disobedience, bringing the anti-capitalist message onto the high street. To this end, instead of the hopelessly reformist Tobin tax, the Yomangistas want a “Robin tax” (Robin Hood, robbin' stuff), set at 100%! It made me laugh out loud, and how many campaigns can you say that of?

The capacity to think on our feet

The constant threat from fascist groups was contained by the actions of our excellent security to some defacing of the “queer space” and “gender day” posters. The security was renamed the “Emma team”, to make it less macho and more effective.

Vegan and vegetarian food was provided by the local Rad collective, a cooperative kitchen which needed this work in order to survive and resist privatisation. Mixed with our own “autonomous kitchen”, this meant we had a near-perfect combination of local solidarity and self-sufficiency. And Serbian beer is excellent.

Holding the conference in Eastern Europe

And hopefully the next one will be in the East too.

The DSM in Serbia had proposed hosting the conference in the following terms: “We think that it is about time to leave "samba activism" and summithopping behind us , that it is about time to relate networking and local struggles. There is hardly a better place to do this than in Eastern Europe- and PostYugoslavia in particular.”
The week of the PGA conference saw much successful linking-up with locals. Workers from 7 local factories met on the PGA site with fellow workers from Greece and elsewhere. People attended the striking electricity workers' protest. The samba band and the Roma combined to play music. We visited a group of 200 Kosovan Serb refugees, forgotten and ignored by the UNHCR and unvisited for two years. We listened to their concerns (they are living in an appalling disused mental asylum, but are worried they will lose even that), and their high degree of consciousness and articulacy presented us with a challenge. Was this visit just tokenistic, or will we make good on our promises to take action on their behalf?
Every night at the “big school” the local kids came down to party. The final “visibility” night in downtown Belgrade was spectacular. 100s of Belgraders were attracted to the opulent Student Cultural Centre by the promise of the Serbian premiere of Michael Moore's “Fahrenheit 9/11”. Capitalism intervened in the form of the local distributors, who threatened to sue the Centre if the film was shown. This led to a discussion on “copyright/copyleft”, and meant we didn't have to show a Hollywood film after all. Rumours that it will soon be shown “spontaneously” on a Belgrade street are, I hope, true. Towards the end of the evening, the samba band spilled onto the street (a very symbolic street in Belgrade, where protests traditionally take place) and everyone danced in the middle of the road.

The lack of people from ethnic minorities. The socialists have a much better representation of black activists. Belgrade is a hard place to reach for people from the South, but people from the black disapora in Europe were seriously under-represented. N.B. This is recognised by the PGA as a fault which needs to be addressed by effective outreach.

A small group from London whose method of argument was to enter late into a coordination meeting and wipe their arse on a document they didn't agree with (literally!). The disagreement seemed trivial to me, an objection to an anodyne paragraph on gender issues in the “PGA reader”. Note: aggressive men always seem to get most wound up about gender politics. Why is that, I wonder?

Anonymous Zionist leaflets posted everywhere after the Israel / Palestine screening, accusing the PGA of anti-semitism. This was the usual Zionist conflation of opposition to the policies of the Israeli government with anti-semitism, even trying to align us with Hamas! The argument was refuted by the screening itself, which showed the Israeli Anarchists Against the Walls' brilliant video. Instead of proposing a workshop on this subject, the accusers put up anonymous notices and secretly slashed the pictures of an ISM photo exhibition.

The denunciation of one of the conference participants in the conference newsletter, including the printing her photo, forcing her departure. This was a personal/political vendetta dating back 15 years, and was a totally unacceptable way of dealing with it. Some “truth and reconciliation” would have been better.

This small number of negative incidents was hugely outweighed by the positives, as I recall the lasting image of the joy of the samba dancers on the streets of Belgrade.