SAY "NO" TO EXPANSION AT CAMPSFIELD: THE HUMAN TIME-BOMB ON YOUR DOORSTEP

Campsfield Immigrant Detention Centre is a place where innocent people are made to suffer. It has a 10-year history of brutality, suicide-attempts, hunger strikes, and
massive protests. In 2002 the Government finally admitted that it was "unsuited to the needs of the 21st century", and announced its closure. But instead, the Home Office has now sent Cherwell District Council a planning application to expand it from 180 to nearly 300 places. 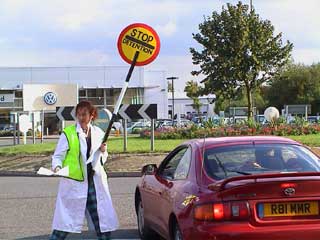 The Government's first "super-centre", Yarl's Wood, exploded (almost literally!) in 2002 after brutal mishandling by guards of a woman detainee. The second super-centre, at Harmondsworth, exploded this July, after the suicide of yet another inmate, just months after opening to its full, 400+ capacity. Yarl's Wood and Harmondsworth were allegedly "show-pieces". Campsfield is already overcrowded and squalid with just 180 detainees. The government wants to cram in another 100 or more justifiably angry, outraged men. It won't be a question of whether there'll be an explosion, but when.
Places like Campsfield are in effect prisons - but they are not designed to protect you or me from anything. The people inside have not been charged with any crime. Their imprisonment is purely to "send a clear message" to the poorer and blacker members of the world's population that Britain is a tough place where there are no easy pickings. Britain's detention centres have been declared unsafe by the Inspector of Prisons. They are run by private security firms whose low-paid guards have little training (beyond how to "control and restrain" the inmates) and are often blatantly and violently racist. At the moment 20 civil actions are being taken against them by detainees for alleged assault. They have been exposed as incompetent or worse in the shambolic and expensive trials that follow disturbances.
When innocent people are treated worse than criminals something is bound to give. Every so-called "centre" is a sink of suffering for its inmates and a time-bomb for its local community - which bears the brunt of the inevitable explosion.This time, we have a chance to step in and say "no".
Fax or write your objection (BY AUGUST 31ST!) to Bob Duxbury, the South
Area Planning Officer, Cherwell District Council, Bodicote House, Banbury OX15 4AA.
Fax: 01295 270028 - citing Reference No 04/01493/GD Join the Close Campsfield campaign. See

http://www.closecampsfield.org.uk, or phone 01865 726804. Demonstrate!
We do this (fairly noisily, so that the inmates can hear) on the last Saturday of every month, from 12 till 2pm, outside the main gates of Campsfield Detention Centre, off Langford Lane. COME AND JOIN US THIS SATURDAY.