Call to Action for Venezuela and all of Pachamerica - Oct 12th

At oxford indymedia's "Bolivarian Venezuela" screening it was announced that there will be a "Pachamerican" action on "Columbus Day" - October 12th. Here is news from the recent meeting in London to plan this action. 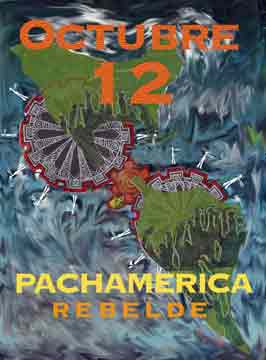 Hello and thanks to all the people who came to the meeting.
We have decided that the demo will take place on Tuesday 12th at 4.00 pm in Grosvenor Square, next to the US embassy.
The rally will be there until 6.00 pm.
So that all who wants could go afterwards to Kings Cross where there will be a debate between Phil Gauson, from the Guardian, who criticize the Bolivarian Revolution and Jorge from Hands off Venezuela.

About the demo we will be contacting some puppet makers in order to build up a big Columbus Puppet, quite fat and greasy with Bush's face, and with Tony Blair on his shoulder as a parrot. And big moving Hands. Also it will have oil towers on his back and head, plus oil companies logos on his suite.
Beside him there will be the three ships that travelled that day, but they will be as war ships with cannons and with the inscriptions of WTO, IMF, FTAA, PLAN COLOMBIA, etc.
And in front of him the earth globe that the today's Columbus will be trying to catch (but he'll never succeed!)
The possibility of having people on Stilts with big heads is also there as probably other big columbus (why not if possible a sharon one)

There will be a new flyer with less explanation than the one we have been giving until now. And we will leave this one for the day of the demo.
The new flyer will have a picture, probably the one I am attaching, and also the date, time and place.
Teresa will probably do a Sketch of it, and I will also try to do one, to put on the list and see which modifications it needs. But everyone is welcome at trying a sketch. The things to have in mind on the flyer sketch are that it has to contain: the title (October 12th), a short text, a picture or logo, the date, time and place, plus the website links and, probably the shows which will happen that day.

We have some ideas about the shows and the people talking that day, as well about the sound system, but all this will be confirmed asap.

Apparently also the Zapatists are having a demo on the same day, and we will try to contact them to see if we can join both demos.

Well, I think that´s all.

If there is any mistake on the minutes, please, let me know (and forgive my english mistakes)

This will be the last mail I send to everyone outside the list, so I leave free those who want to keep receiving the mails to join it at

http://lists.riseup.net/www/info/pachalondon and those who don´t want to, to be outside it.