The popular film Stupidity is premiering at the OXDOX Festival in Oxford next week. 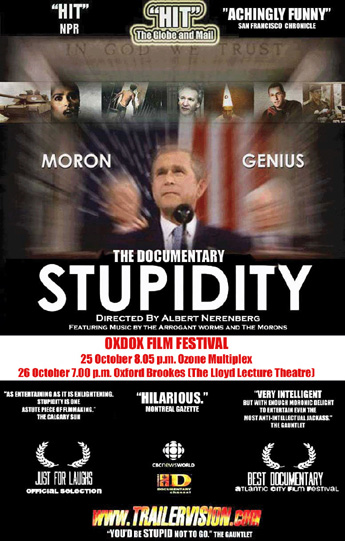 Imagining Stupidity, the first known symposium in the history of human civilization, will take place at Oxford University organized by the upcoming OXDOX Film festival. A pre-symposium is taking place next weekend with the screening of Stupidity, the first documentary on the subject. Stupidity, a ground-breaking North American documentary, claims that very little is known about stupidity, there has never been a formal investigation of it, and academics are afraid of it. The film has been a hit in Canada and the US and makes it’s formal UK premiere at OXDOX[.
The film will screen twice at the festival and will be accompanied by panel discussions and debates on the development of a symposium on willful stupidity and ignorance for 2005. Stupidity director Albert Nerenberg will be in attendance.
The goal of the symposium is to raise interest in a larger international conference in 2005. Stupidity plays Oxford October 25th and 26th.
“The academic world has studiously avoided the topic of human stupidity,” said OXDOX Director Marie Wright, “in a world where stupidity has so much influence that itself may be stupid. That’s why we believe a stupidity symposium is an urgent necessity.”
Academics will be invited to debate the issues.

Among other topics, Stupidity probes the question of US President Bush’s alleged willful ignorance. Stupidity reveals:
? Very little is know about human stupidity
? STUPIDITY may be the driving force of humankind
? The SHOCKING origins of the words moron, imbecile and idiot
? Stupidity is fueled by strong belief systems, left or right, and often smart people are the stupidest.

Stupidity was originally commissioned by the Canadian Documentary Channel.

"Stupidity is hilarious, and perfectly timed," wrote the San Francisco Chronicle. Stupidity also inspired the World Stupidity Awards which take place every year at the Just for Laughs Festival in Montreal. Director Nerenberg is also the founder of Trailervision — “ international cult short film phenomenon” (CNN), which has popularized the movie trailer as a new entertainment medium.
Stupidity has been controversial for it’s inclusion of President George W. Bush. It was even well received in Texas although some critics have called it stupid.
National Public Radio, The Toronto Star, and Montreal’s Le Devoir all called Stupidity a “hit” after the film repeatedly sold out screenings in Toronto, Montreal and San Francisco turned away thousands. The film, which won “Best Documentary” at the Atlantic City Film Festival, attempts to answer the question: how, when humanity is so advanced, can ignorance and stupidity be so rampant?