On Monday 11 October, Sarah from Oxford along with other peace activists
from all over Britain came to London with a Trident submarine to help take a
message to Tony Blair and to challenge Labour to abandon its WMD and to
comply fully with its international treaty obligations. 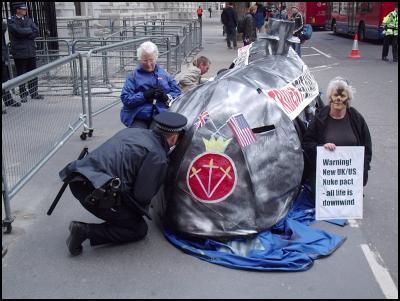 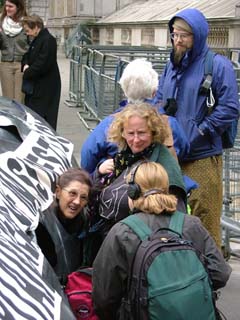 From 10.30am. till 3pm, the 25ft model sub, with 18 'TP submariners' locked
on inside, blockaded the entrance to Downing Street effectively preventing
vehicles from entering or leaving. Following a deal struck between the
police and the protesters the sub was dismantled by peace activists rather
than destroyed by the police. A number of the activists were members of the
Theatre of War who had constructed this impressive puppet and they will be
taking it on further outings.

During the final minutes of the blockade Trident Ploughshares spokesperson
Angie Zelter was allowed to hand in a letter to No. 10 for Tony Blair,
calling on him to ensure that Britain will refuse to renew the 1958 nuclear
co-operation pact (Mutual Defence Agreement ('MDA')) with the United States,
and will comply fully with the Nuclear Non-Proliferation Treaty ('NPT'),
which requires Britain to take steps to engage in nuclear disarmament.

The Government is trying to renew the MDA without any debate in Parliament
yet advice commissioned from Matrix Chambers lawyers is "In our view it is
strongly arguable that the renewal of the Mutual Defence Act is in breach of
the Nuclear Non-Proliferation Treaty."

The letter urged the Prime Minister to uphold international law, reject the
pact's renewal and get rid of the Trident nuclear weapons system. 44 MPs
have signed an EDM asking for a proper debate on this important matter.

Over 25 people were ready to be arrested for their involvement with this
weapon of mass destruction and despite no arrests taking place it was felt
to be a successful attempt to bring this issue to the notice of more people.
Shame that despite there being film crews from all the major TV companies
there was not mention on the news programmes. However Al Jazir did an
interview and I imagine that will have winged its way all round the Middle
East.