The Heavenly Righteous Opposed to Nano-tech Greed manifested at a conference of potential investors in the nano-technology industry today. Harry Swan, once in charge of PR for Monsanto and now trying to sell nano-tech to investors, was presented with a Can of Worms Award. 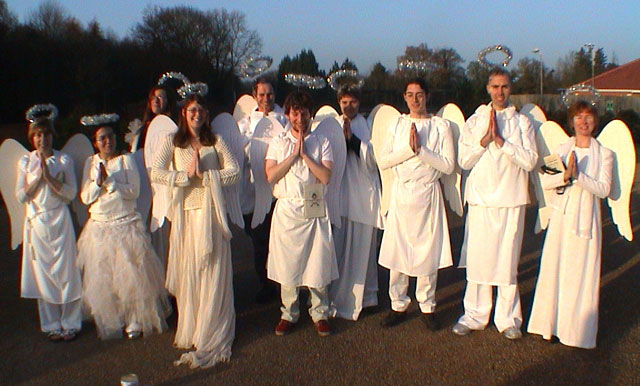 the host of angels 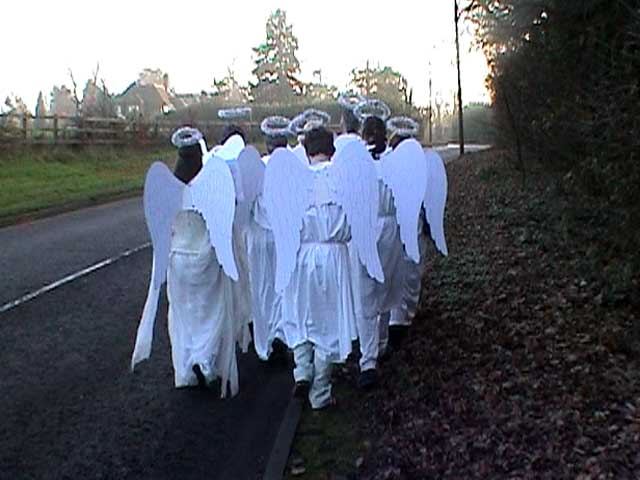 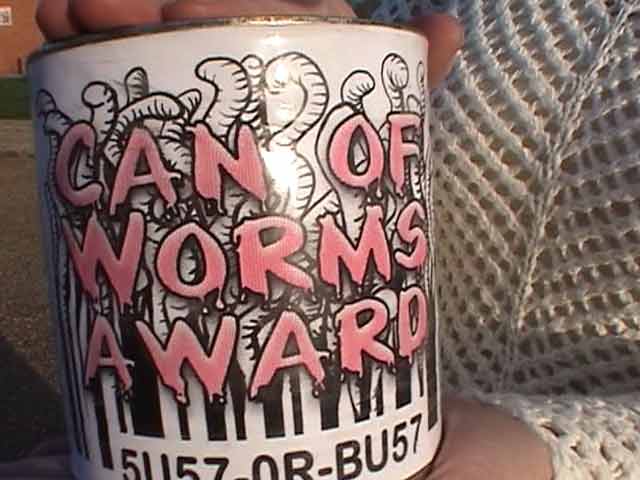 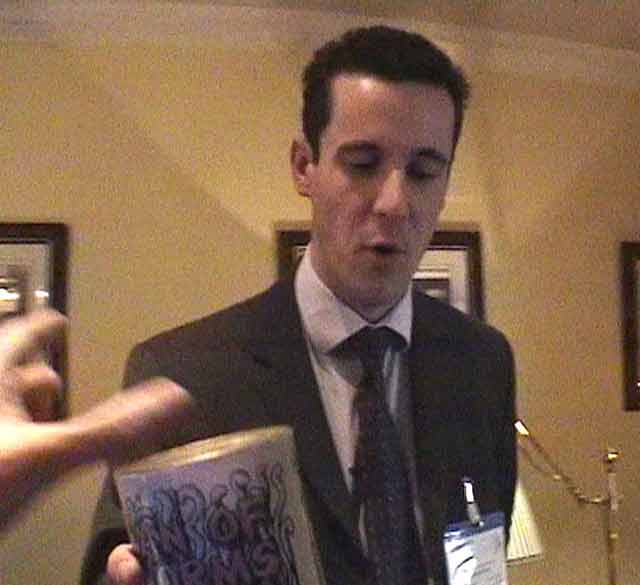 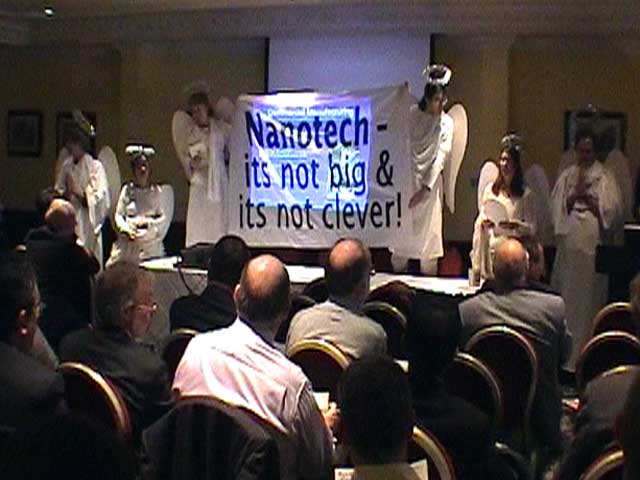 See the text of the action on this report.

Hopefully these protests will show the venture capitalists and corporate execs that nano will not get them ahead in the global competition to high tech profits.

Instead it will bog them down in a quagmire of scientific uncertainty and public questioning. This nano-battle may make the dramatic social rejection of GM crops look mild by comparison. So they shouldn't bother investing the $billions...they should learn that there will be no easy return!

Most of the precautionary science has only just started. The problematical social, ecological and human health aspects of nano-tech are potentially enormous.

But the protesters 'angels' stunt troubles me. I know the 'angels' theme is fun...and makes a point, dancing on a pinhead, fear to tread, etc BUT:

The religious imagery, calling yourselves the 'The Heavenly Rightous' etc., might give the wrong impression. A by-stander might have thought your protest stemed from religious bigotry and superstition.

I think that the kind of prince charlesian 'scientific interference with 'nature / gods will' is blashepmemy / unnatural' sort of crap is just as dangerous as nano-and-bio-technology and neo-liberalism.

New metaphors for activism please! I'm happy to help! (Unless you are religious nutters, in which case, I cannot support you).

Great action! Keep it up.
Trooper, you want to get a grip...never heard such shit. Get off the couch, and dress up as a cob of corn and visit your local biotech...it really doesnt matter what they dress up as if it's effective ;)

i suspect you might be american - the angel action is dripping with irony and clearly not christian - its the holiday season for chrissakes (!)

that said i agree that new metaphors and memes for activism are very welcome.. and that one needs to be careful of inintended perceptions.. if you have good suggestions re: nanotech why not email them to

bless you my child...

Fantastic action! With a hilarious theme - I laughed fer ages. Looks like you all had much fun.

Hopefully it made those suits think as well, if not they'll stew in hell for all eternity moawahahaha :)

...Polyphonic Spree to me, and not much like Ian Paisley. :)

No we really are a bunch of religious nutters


No, I'm not American, or distant, or gripless! I live here, and have spent the past few years pulling up GM crops with you! I probably know many of the THRONG. (Remember Superheroes Against Genetics?)

All I wanted to do was question the angels theme in a friendly way...and I get a really nasty and defensive response :(

Like being told to get a grip, and I'm talking 'shit'...well thats not a very nice way for activists to talk to each other, is it now? Thats not taking each others concerns seriously.

Brushing it aside so lightly also shows a lack of a grip on some extremly powerfull cultural forces at work today.

Powerfull capitalist forces promote these new technologies. But there are also powerfull reactionary religious forces stirring, here in Britain too.

I do not want to align with one to oppose the other. I'd like to create a new political and cultural space that can challenge all oppression.

Nanotech could do good with lobbying against misuse 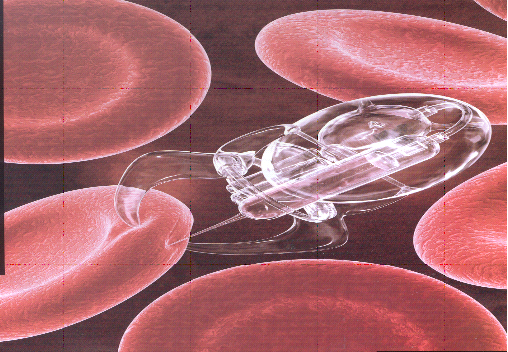 Nobody's going to stop the progression of any progressive technology where there's the potential for profit. In this case, future medical treatments may arise out of the ability to approach illnesses on a cell-by-cell basis. Imagine a nanobot which can sense whether a cell is cancerous and then decide whether or not to eliminate it. Imagine treatment of individual red blood cells in an anaemic individual, see example picture (composition - not a photograph). Science is merely knowledge, and technology can be used for good and bad: society's best bet is to lobby in favour of good applications, while lobbying against nanowar. Likewise, the antibiotics and vaccines which have eliminated smallpox and polio arose from the same "stable" of technology which has been misused to produce biological weapons - "microbiology / virology". Today, hundreds of ex-biological weapons scientists work in other sectors under a scheme paid for by NATO - if we can encourage more of this kind of decommissioning of the jobs involved in warmongering, an lobby for corporate social responsibility we'll have more impact than actions which fail to state any clear logical basis in their publicity. It is no longer viable to tout opinions backed up with no evidence: these are not facts. Blair et al use this technique to dupe the electorate - creating mis-trust and cynicism. The Green lobby should not use the spin techniques of a propogandist warmonger.

hey para(digm) trooper - sorry to question your cultural background - i thought maybe it was just a simple transatlantic irony deficit.

I'm really glad of your comments because I also strongly believe we need new ways to do activism, new imaginative metaphors, memes and modes of intervention. If you haven't read it i really really urge you to read the SmartMeme project's excellent "De-colonizing the revolutionary imagination"
(its online at

This lays out a great set of approaches for 'direct action at the point of assumption' - ie intervening not in physical processes only but strategically intervening in the formation of values assumptions that underlie behaviour (like culture jamming but more so). The angels action was a small attempt at this: The conference that was disrupted was a sales pitch by the nanotech industry to entice new bussiness/investors into its fold. The aim of the angels was to implant doubts and questions in the minds of that audience - To weaken the sales pitch. Since we were only going to have a short time in there what was neccesary was to make a strong connection to existing powerful ideas and metaphors already in the culture - hence 'angels fearing to tread' and 'opening a can of worms'. The angels thing seemed a good idea since it was clearly unthreatening, even seasonal, and an audience is more likely to take in a message if they are relaxed and not alarmed. Please bear in mind the 'angels' get-up was for the benefit of a specific audience - not the world at large.

On prince charles-stylee 'don't interfere with nature/gods will'. I agree this shouldn't be cast in religious terms but on the other hand i wouldn't dismiss its importance. The 'messing with nature' meme was a very powerful one in explaining why the public rejected GM crops and dislikes environmental pollution- its a strongly ecological theme that happens to also have resonance in our christian culture. You may not like organised religion (and with good reason) but judeo christian theology forms the basis of our european value systems and therefore connects easily with large swathes of the public. There are plenty of useful and sound values in christian thought that shouldn't be thrown out with the bathwater (grace, blessings, peace, justice, celebration of creation etc) - you have to remember that christian thrology is broad and often contradictory and has been a battleground for quite contrasting values for many many centuries. i feel perfectly comfortable evoking some progressive elements of that theology even though i'm not religious just as i'm happy to evoke certain enlightenment ideas about rights and human dignity without buying into the full liberal democracy project. Movements for change have often succesfully echoed christian values to reach out to wider culture - campaigns for peace and against nuclear power were often explicitly christian in a 'blessed are the peacemakers' way, Jubilee 2000 played heavily on forgiveness and fair trade movement derives a lot of its legitimacy from christian notions of justice.

The bigger point here though is that I think we should base our public critiques (of nanotech, globalisation or whatever) on shared life-affirming values that appeal beyond our ghettoes. Halting the Nanotechnology juggernaut and the larger fight against the pandoras box of corporate technologies its about to unleash (nanobiotech, robotics, AI etc) is going to require a sustained effort of imagination and creativity to present to the public the full horror of the technological onslaught to come in a way that is immediately emotionally understood. On GM food and crops we were able to find existing feelings around food and countryside and tap into those (and some of those were really quite reactionary forces too). we acknowledged but didn't lead with the 'playing God' theme while still articulating a vision of biojustice that was rooted firmly in challenging the logic of capitalism. I think we don't want to get lost up our own ideological fundaments. our main challenge is going to be building another popular movement as motivated to resist Nano as they were to reject GM. if that involves connecting with language that is used by Christians, buddhists, devil worshippers or car mechanics I don't care so long as that language inspires action.

The Institute of Nanotechnology has extended an invitation to the 'Angels Against Nanotech' to present their views at the next meeting of the Advisory Group of the Institute, on January 20th in London.

"Nanotechnology is about the design of many new products using our understanding of about how things work at the very small scale. We all benefit already from nanotechnology - it has led to the invention of DVD players, life-saving air bags in our cars and is now leading to successful treatments for hitherto fatal brain tumours".

"Those of us involved in nanotechnology are keen to explore any public concerns. I unreservedly recommend interested individuals read the recent independent study by the Royal Society / Royal Academy of Engineering on 'Nanosciences and nanotechnologies - opportunities and uncertainties' This report can be downloaded free at

Empowerment need not be negative

I'd question the earlier post suggesting that future technological developments will necessarily be horrible or could be described as an onslaught.

Perhaps 50-somethings are finding it more difficult to operate the remote control on their television, and don't understand the full weight that current medical and scientific advances will have on human health. There may be a crisis in the economic system, the Western blok's wealth may well be built upon a false assumption - but don't rubbish the wonderful achievements in science and technology, and certainly not in the incredible field of AI.

If you want to know more about AI, go and take a distance learning course in it. If you don't have the pre-requisites study and attain them. Ignorance is no excuse for slagging off beneficial and interesting areas of research and development. Aspects of AI are already used widely in computer-based technologies, and you've all benefitted.

In response to the previous comment that someone should "present to the public the full horror of the technological onslaught to come"...I'd rather you continued watching Terminator III and stop applying things you learnt from "I, Robot" in reasoned debate.

Many people in France appreciated very much your hilarious and well-thought work. As some were occupying Minatec's cranes in Grenoble, for instance. I'm sure there will be many opportunities for us to meet and pursue our current reflexions on slave-sciences and control-industry. Looking forward to meeting you.