Workers arriving at the Caterpillar - Perkins site in Irlam, Greater Manchester on the morning of April 10th were surprised, first by a 30 foot yellow banner with an acrylic image of a Palestinian, head in hands, whose house is being demolished by a Cat bulldozer while an Israeli soldier stands guard. 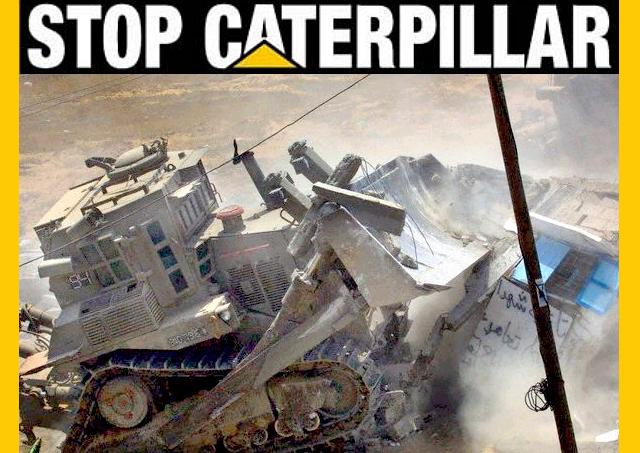 The banner flew from a mound of grass along the private road to the security gate, the only entrance this morning. Management had hunkered down on red alert with police and dogs on site since 2 a.m. expecting an invasion under cover of darkness, for some reason.

Drivers rounded the banner to be met by huge photos of armoured Caterpillar D9 bulldozers smashing into Palestinian houses, while children flee. Above the photos, the "Stop Caterpillar" logo.

Then came the megaphone, offering the slowing traffic soundbites on D9 demolitions and the "Apartheid Wall", and inviting them to stop and take a leaflet from protestors gathered in front of the security gate. Around 30 people had turned up from Manchester, Liverpool, Preston, and Brighton, converging on the gate at 6:30 a.m.

Irlam is the world distribution centre for Perkins diesel spares. Caterpillar bought Perkins in 1997. Perkins CV12 engines are incorporated in T72 tanks in a joint venture with the Israeli company NIMDA for re-export to the world market.

Irlam is also one of 3 Cat Logistics sites in the UK. Cat Logistics handles Caterpillar spares worldwide. A joint venture with Honeywell and BAe bid unsuccessfully for a logistics contract with the Australian Defence Forces.

Drivers now faced a choice - accelerate through the protest in full view of the cops, or drive safely and risk having to actually look someone in the face or even take a leaflet.

It was all too much for some - they kept their windows firmly sealed while staring straight ahead. Others were interested but scared that someone might notice, a few shouted at us and declined any discussion. But quite a number, especially those not driving a Jag, perhaps even walking to work, were curious enough to take our leaflet and the War on Want Shareholders anti-Report. Some knew nothing about their company's role in Palestine and thanked us for the information. Some knew of the issues and agreed with us completely. Some, it seems, were embarrassed to go into work through our line.

We were surprised by that, but even more so to discover that - apparently - the site is completely non-union. We began to encourage workers to join a union and take up their own issues.

To our knowledge this protest was the first to focus fully on the Caterpillar workforce, the people who could really put a stop to Cat's collaboration with ethnic cleansing in Palestine. It was a small first step.

Why not try it in your area?

Marita And Greg (re-posted by richarddirecttv)