For the eve of the Cowley Road Carnival, Brazil Solidarity presents a full-on Brazilian festa. 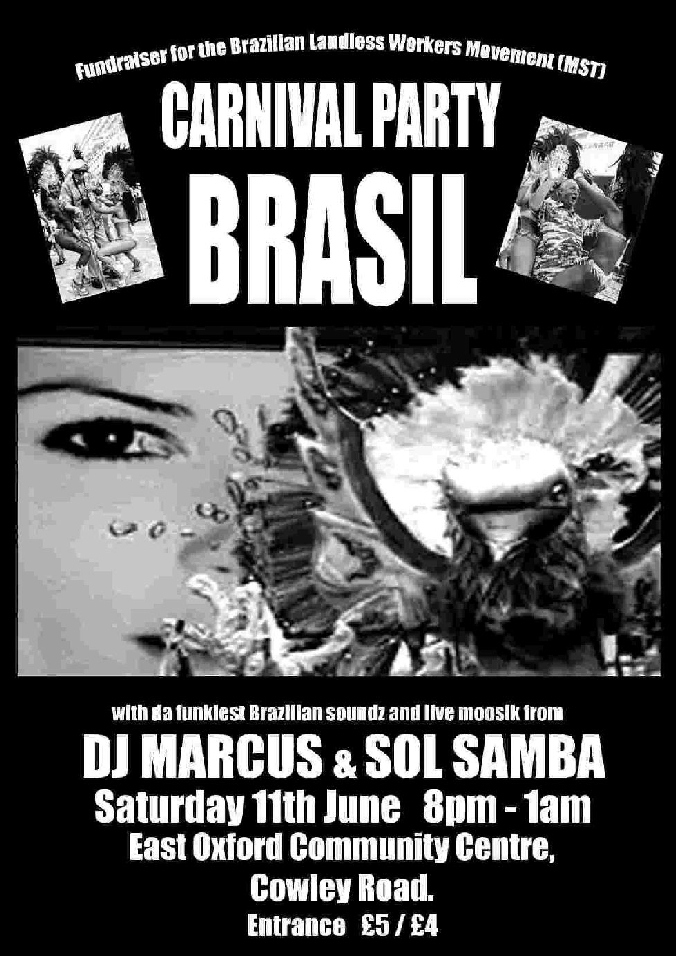 With the funkiest Brazilian sounds
from special guest DJ MARCUS

And live samba from Oxford's own
SOL SAMBA

Entrance £5/£4. All proceeds to the Brazilian Landless Workers Movement (MST), to support their fight for land reform.

Brazil’s Landless Workers Movement, Movimento dos Trabalhadores Rurais Sem Terra (MST) in Portuguese, is the largest social movement in Latin America with an estimated 1.5 million landless members organized in 23 out 27 states. The MST carries out long-overdue land reform in a country mired by unjust land distribution. In Brazil, less than 3% of the population owns two-thirds of the land on which crops could be grown.

Since 1985, the MST has peacefully occupied unused land where they have established cooperative farms, constructed houses, schools for children and adults and clinics, promoted indigenous cultures and a healthy and sustainable environment and gender equality. The MST has won land titles for more than 250,000 families in 1,600 settlements as a result of MST actions, and 200,000 encamped families currently await government recognition. Land occupations are rooted in the Brazilian Constitution, which says land that remains unproductive should be used for a “larger social function.”

The MST’s success lies in its ability to organize and educate. Members have not only managed to secure land, and therefore food security for their families, but also continue to develop a sustainable socio-economic model that offers a concrete alternative to today's globalization that puts profits before people and humanity.