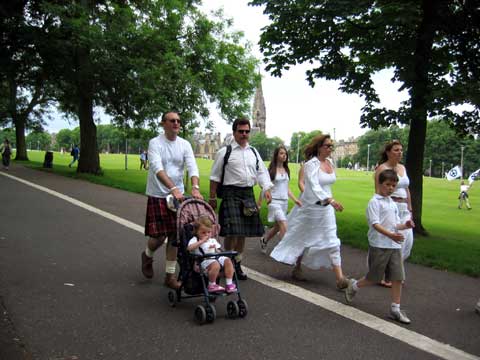 Families arrive in the Meadows 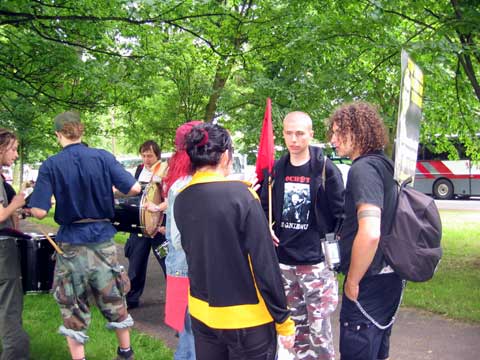 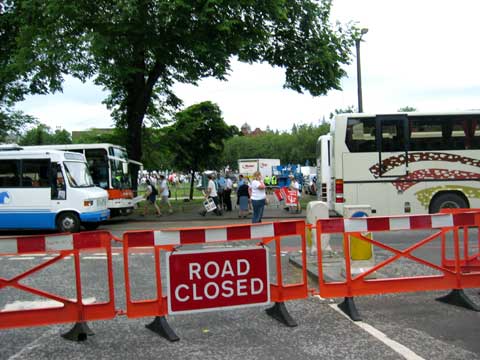 Coaches in the Meadows 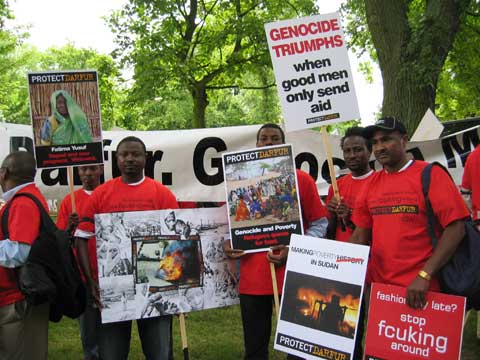 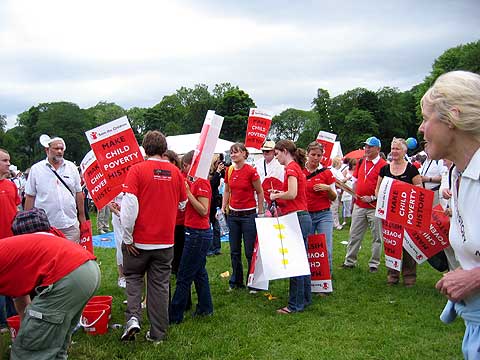 'Save the Children' contingent assemble 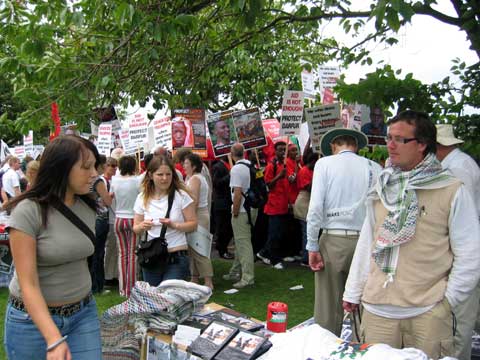 The crush begins to develop 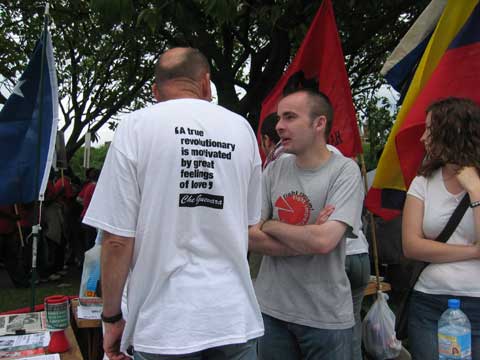 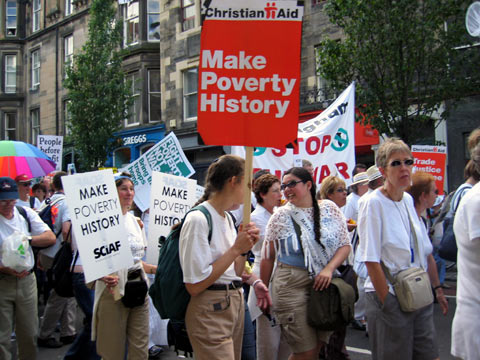 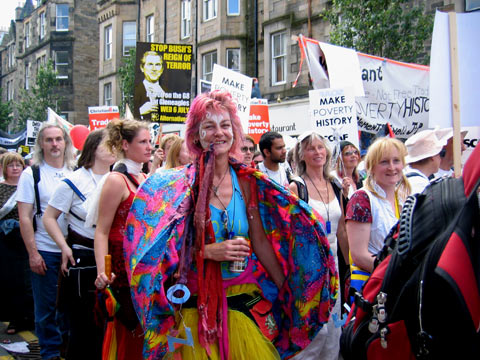 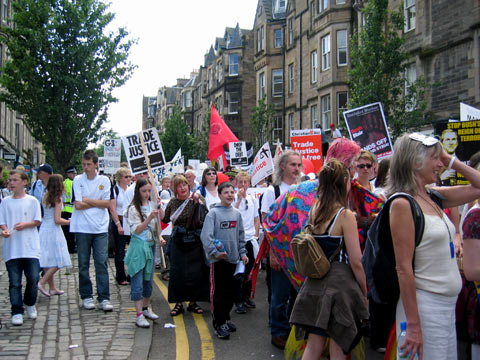 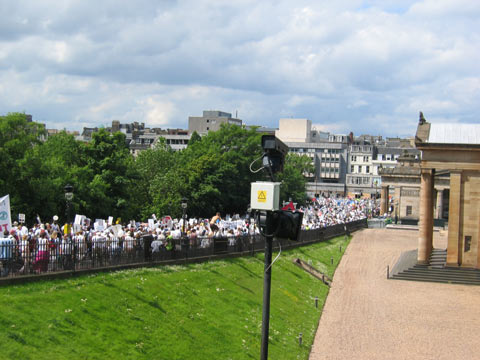 Marching down The Mound 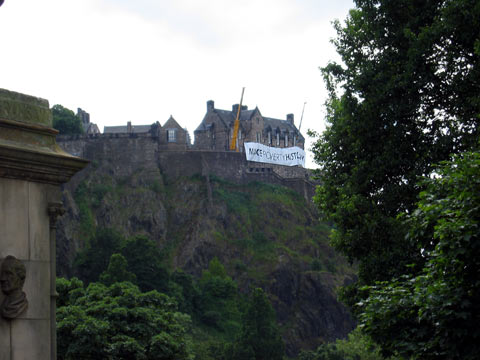 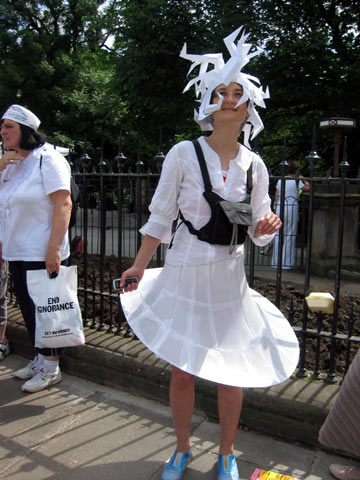 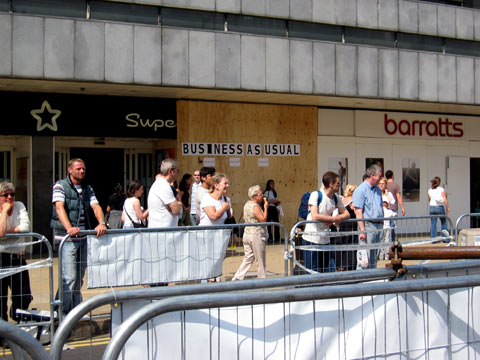 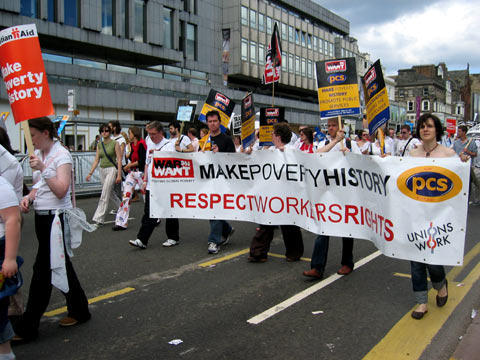 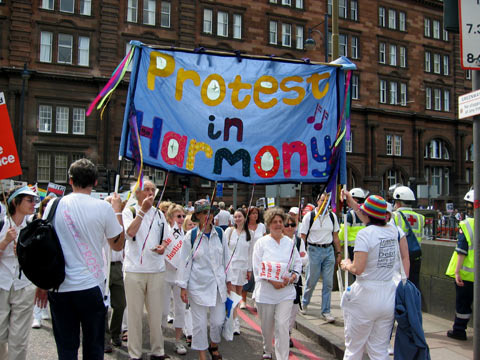 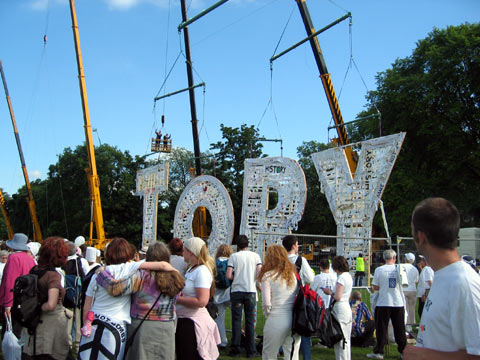 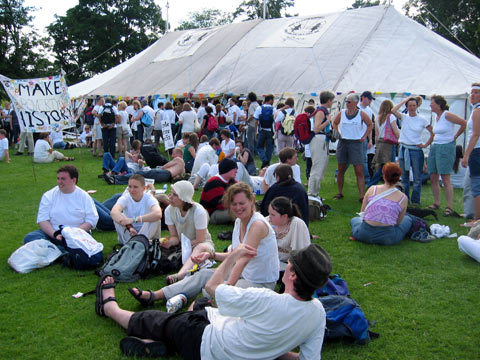 Well, my couple of weeks in Scotland for the G8 events were every bit as exciting as I had promised myself they would be. They included appearances (not solo) on the stage of the Edinburgh Festival Theatre in ‘Black Sun over Genoa’, a couple of threats of arrest (filming in the wrong street at the wrong time), and a couple of near-accidents (involving barbed wire and other nasties).
However, nothing particularly untoward happened on the day of the Make Poverty History March. The day started for me with an anxious hunt, along with a group of women peaceniks (from WILPF), for transport to get us to our assembly point in the Meadows, in an Edinburgh where most city centre streets had been closed to traffic, barricaded by the police and many of the stores were boarded up against us vandals. In the end I arrived rather early for my ‘choir practice’ in James Gillespie’s High School with Protest in Harmony, a mass choir formed specifically to sing on the march. People came from every part of Britain, mainly belonging to existing singing groups such as Cor Cochion (Cardiff), Red Notes (Leicester) and of course the Sea Green Singers (Oxford). I wandered off to get some pictures, then attempted to rejoin the choir in the Meadows. By that time crowds were massing, and I could only spot a few colleagues. Even using a mobile phone I was unable to locate my group till they got to Princes Street, several hours later. The march was absolutely enormous and I am still quite resentful that there was so little media coverage, it being almost completely overshadowed by the Live 8 concert. I also can’t really understand why we all had to stand in police pens in the Meadows, for hours and hours, hot and tired, before we were able to filter out onto the route of our march. The police said it was for our safety, as there were so many of us, yet they also claimed to be experienced at dealing with large crowds (at pop concerts, for example) so were they incompetent, trying to harass us or what?
Anyway, marchers returned to the Meadows to relax, eat (I only saw fast food stalls – why do they do this to us?), to watch cranes lifting the giant letters MAKE POVERTY HISTORY into place, or even to caper to wild Scottish dances in the Ceilidh Tent. Oh, my poor feet!
The following day we had the G8 Alternatives Conference, with many interesting discussions, followed by the now notorious ‘Carnival for Full Enjoyment’ on the Monday, where protestors and police clashed violently in several separate demonstrations. The police scored a bit of an own goal (in my opinion) by holding passers-by and the world’s media, along with a fairly small group of protesters, penned in Canning Street, part of Edinburgh’s financial quarter, for a number of hours, without access to water or toilets. After three hours I managed to get out, but I was forced to give my name, address and other details, in addition to being videoed, otherwise I was told I’d be arrested. This, as you can imagine, left me feeling pretty grumpy, but it seemed foolish to take a stand and get arrested.
I have video footage both of these events and of the Gleneagles march on Wednesday 6 July, and will try to make these available to people later on, if required.