Canada is a leader in the abolition and antiwar movements.
Please stop a tiny number of fishermen and international furriers who
are keeping Canadian seal clubbing going long after
it has ended in the UK, US and elsewhere. 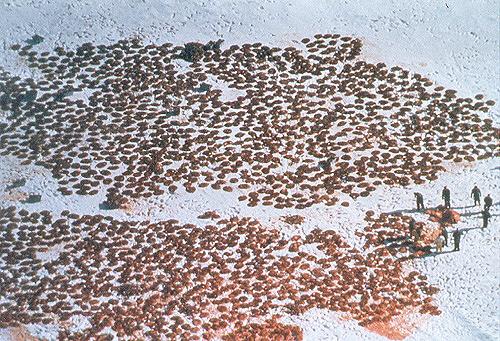 The government of Canada
can stop the planned clubbing
of 300,000 seals in March.Stop The Clubbing Murder Next Month of 300,000 Seals


Please do these steps to achieve
victory.

1. Contact the Canadian embassy in your country.
Tell them you will not travel in Canada, purchase Canadian
products, nor travel on Air Canada
until seal clubbing stops.

http://www.canada.org.uk/
Canadian embassy in the UK

6. View the video of sealclubbing
hear the agonized sounds
.. in a video narrated by Martha
Stewart

http://www.hsus.org/web-files/Seals...edgeFeb2006.pdf
Please print out this brochure
on recycled paper
and have businesses sign it

12. Stop eating meat and fish
for your sake, the animals', and
to remove any connection
to the greed for fish of
Canadian seal clubbers
and Japanese and Norwegian
and Icelandic and Inuit whalers

13. Ask your community
to pass legislation
to sanction and boycott Canada
until this ancient barbarism stops.

The European Parliament banned the import of baby harp seal pelts from Canada in 1984. Meanwhile, the Britain-based (IFAW) called for a boycott of all Canadian seafood that same year. These actions forced the Canadian government to ban vessel-based seal hunting in Canadian waters (although land-based seal hunting was still allowed),

Recently Greenland has banned
the import of Canadian seal pelts.


Expose the role of the NY Times, Boston Globe,
Chicago Sun, LA Times, Fox and
other warmonger media in
mongering the pelts of these
butchered creatures and of other animals dying in traps or factory farms
so that their skins can be ripped off of them. Media has tried to obscure the role
of furriers and focus only on the fishermen in assigning blame.

Email this release or your release to every radio, tv, animal rights
group and business in Canada and around the world.

Call talk radio to talk to their audiences.

Consider your own special action.

Year after year Canadian fishermen
have said 'screw you' to the rest
of the world. It's time to show
them where the power lies.

God who indwells all beings... all of us have in some way
harmed Your innocents through eating them, stealing their
milk and eggs, through driving on them, through neglecting them
or other.
We ask a firefall of Your grace to end now and forever
this savage clubbing or Your beloved seals and to end now and forever
all violence to any being.