NHS workers and users will march to protest the cuts, breakup and sale of our public health system. The campaign has already seen off giant US multinational UNITED HEALTH and is committed to defent the NHS through mass protests and industrial action. 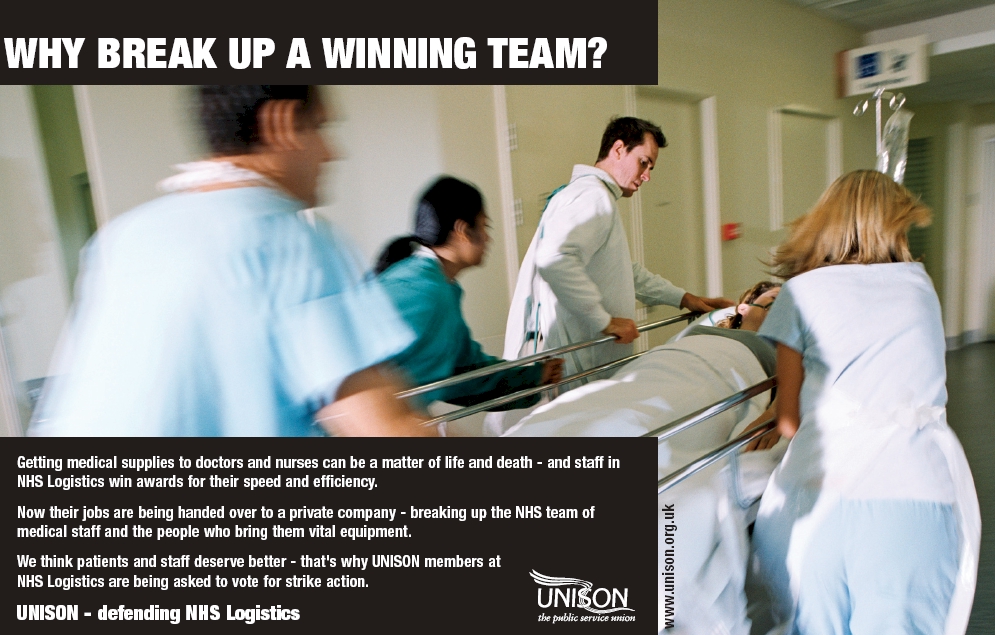 NHS ‘reforms’ … to hell in a handcart?

From its beginning in the post war Britain of shortages and ration cards the National Health Service has been based on the principle of solidarity between the young and old, rich and poor, sick and well – we all share the costs of an NHS which gives care to those in most in need – not those with the deepest pockets.

In the last few years our taxes have gone up to pay for improved healthcare – but not necessarily in the NHS. Increasingly the government is fragmenting the Health Service and encouraging big corporations to provide more and more services.

But is that wrong?

The difficulty is that historically the private sector couldn’t compete with the NHS – because the NHS has no middlemen and shareholders to pay and most of us trust the NHS to do an honest job of looking after us. Unfortunately the government has got round the lack of competitiveness of private firms by forcing NHS managers to commission more and more services from corporations and increasingly they've introduced their own NHS middlemen – growing departments of accountants and contract negotiators whose job is to oversee specifying and buying services from private companies, the semi-independent Foundation Trusts, the voluntary sector and even other NHS Trusts. NHS transaction (admin) costs have shot through the roof (from about 5% to 16% according to Frank Dobson, former Secretary of State for Health). And Frank predicts they will rise further to US levels if the NHS is broken up further.

On top of these costs is the steep price of PFI, the notorious Private Finance Initiative. The government is no longer giving NHS organisations capital grants to build hospitals and clinics but is requiring the NHS to rent the buildings and the support staff from private consortia at an exorbitant price tied in over decades. The Oxford Radcliffe Hospitals Trust reckons that something like 8% of its income will be spent on servicing these debts which by law must be paid for even before settling the medicines and staff bills. Figures for the Nuffield Orthopaedic Centre are likely to be higher. PFI coupled with the new system of ‘payment by results’ may even force the NOC to close or be taken over.

This is the reason why we are seeing big NHS cuts at a time of record funding for healthcare. The situation is really desperately serious. The new healthcare market is corroding the NHS fast. Unless we act swiftly the Health Service will be destroyed and a costly private system will be introduced. It will be too expensive to fund from the public purse. Perhaps top-up fees will be introduced for those wanting decent healthcare and then perhaps healthcare will be like any other commodity – we will just get what we can pay for – except of course it isn’t – often it’s a matter of life and death.

There is an active local branch of the campaign – Keep Our NHS Public which is backed by NHS user groups, local unions, people from different political persuasions and many community organisations. Please support its petitions and lobbies and campaigns. Its web site is at www.KeepOurNHSPublic.org.uk and Oxford Keep Our NHS Public is based at Raglan House, 23 Between Towns Road, Cowley, Oxford OX4 3FQ. Email

Next demonstration is due to start at Hinksey Park at 12 noon on Saturday 14th October.