The lives of environmental activists were put in danger when Bailiffs from Shercurity Ltd smashed their way into the occupied Npower property at Radley Lakes with reckless disregard for health and safety. 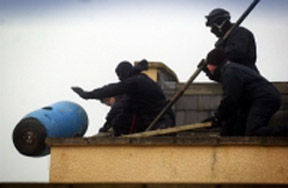 At approx 5am Tuesday 6th February 12 bailiffs dressed from head to foot in black and wearing balaclavas without warning smashed through the window of the occupied npower property showering sleeping activist in glass. They then proceeded to cut the air supply to a fortified bunker without checking if it was occupied, smash there way into a fortified loft without checking that the occupant Dave was safe. Not long after this they climbed onto the scaffold tower positioned on the garage roof and topped with a wooden box containing a 45 gallon concrete lock. Chris who was in the box at the time said they climbed on top of the box and started to rock the tower before breaking in with sledge hammers. Veteran road protester Muppet Dave said ‘it was one of the most dangerous eviction he had experienced and that it was only luck that nobody was seriously hurt’.
Two activists were arrested and one subsequently de-arrested and Chris is due in Didcot Magistrates Court on Thursday 15th charged with obstruction of the Bailiffs. Shortly afterwards npower swiftly cordoned of the lakes despite a ongoing legal challenge by the local “Save Radley Lakes” group for it to be recognised as common land.
The property was occupied with the intention of creating a field centre to raise awareness and prevent these beautiful lakes being in filled with toxic ash from the burning of coal at the German owned RWE npower Didcot power station. However, despite massive support from the local community, where there is overwhelming opposition to npower’s plans, and nearby environmental groups it soon became clear that npower were having non of it, so we decide to oppose the repossession and dig in. This decision instantly created more media interest embarrassing npower and undermining their greenwash and it was probably for this reason that they decide to disregard the safety of individuals and send in the heavies. We are no seeking to take legal action against Shercurity Ltd for the lack of health and safety procedure and endangerment of life. However, we fully intend to continue our campaign to save the lakes and against RWE npower for both local and global pollution of the planet.