Oxford World Development Movement (WDM) staged a 'Climate Change Challenge' in Cornmarket Street on Saturday to raise awareness of a talk they are holding with Friends of the Earth on Thursday 22nd February 7.30pm, at the Friends' Meeting House in St. Giles. The talk is about the impact of climate change on the developing world, and the speakers will be Ricardo Navarro, an environmental activist from El Salvador, and Martyn Powell, WDM's Campaigns Officer. 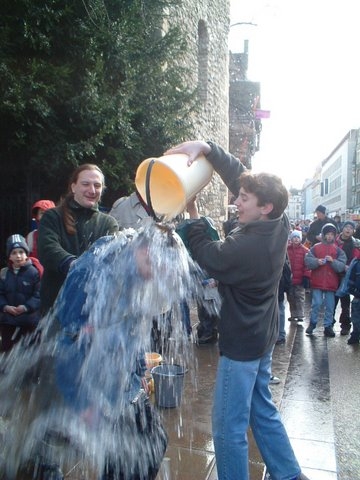 In the Challenge members of the public were invited to throw water over unlucky WDM members, to demonstrate the levels of flooding that various countries' contributions to climate change cause. At least 160,000 people already die every year due to the effects of climate change, and 185 million people in sub-Saharan Africa alone could die of disease directly attributable to climate change by the end of the century if we do not tackle it now.

Kevin Meaney, Oxford WDM Secretary, said, "Poor countries aren’t the ones causing climate change, but they’re suffering the most from the effects – estimates say that by 2050 a combination of rising sea levels, erosion and agricultural damage due to climate change could make 200 million people environmental refugees."

Kevin Meaney said, "Our government could be a world leader on climate change. We want to encourage people to demand that the UK achieves its share of the cuts needed, which would inspire others to follow suit. To find out more about our campaign, or to get involved, come to the talk on the 22nd."

PICTURE: On 5th Feb, the average UK citizen will have emitted the yearly average CO2 of a citizen of El Salvador.

1. The World Development Movement was founded in 1970. We campaign to tackle the underlying causes of poverty and lobby decision makers to change the policies that keep people poor. We research and promote positive alternatives, working closely with grassroots organisations in the developing world to stand up to injustice.