One of the companies bidding for the contract to construct a new coal fired power station at Kingsnorth has been targeted by climate campaigners. Three people have locked on inside and two are up on a ledge outside having dropped a banner.
FOR IMMEDIATE RELEASE

This morning, thirteen people invaded the offices of Surrey-based building firm BAM Nuttall. They have locked themselves to furniture, glued themselves to desks, and are asking to speak to Chief Executive Martin J. Rogers about the disastrous implications of building more coal-fired power stations. Several protesters have also occupied an exterior ledge above the building’s entrance, with a banner reading: “No New Coal: Build a Greener Future”, and staff and passers-by are being given leaflets and information about the protest.

The campaigners, from Thames Valley Climate Action [1], are targeting BAM because the company is bidding for the contract to build a new coal power station at Kingsnorth in Kent, for the giant energy company E.ON [2]. This would be the first new UK coal power station for 30 years, and would produce around 7 million tonnes of CO2 per year, equivalent to the entire emissions of a country like Ghana [3]. According to a new report from Kofi Annan’s Global Humanitarian Forum, climate change is already killing 300,000 people per year, and will get much worse unless we urgently reduce our CO2 emissions [4].

One of the protesters, Xavier Perez, said: “BAM Nuttall point to the introduction of low energy lighting and improved heating at their head office as examples of how they are reaching their sustainability goals. This conveniently overlooks the fact that they are hoping to construct a power station reliant on the filthiest fossil fuel in existence. This would be laughable if it were not for the fact that millions of lives, livelihoods and species could be lost.” [5]

The Government and E.ON are claiming that a new Kingsnorth power station would eventually include “carbon capture and storage” (CCS) technology, to catch 25% of its emissions and store them underground [6]. However, the campaigners inside BAM Nuttall point out that this is unproven technology that is still being tested, and won’t be available until at least 2020 [7]. Climate scientists say we need to make sharp carbon cuts long before that date [8]. Even if CCS is one day installed, and works as planned, the plant would still produce more CO2 than a gas power station [9].

The Government’s other favoured justification for building new coal power stations – that the emissions would be included in the EU’s “carbon trading” scheme – has been widely and heavily criticised [10]. Critics say that this scheme is a complex and unworkable distraction from real climate change solutions, that isn’t reducing net emissions, and essentially hands control of the climate over to the same bankers, brokers and private traders responsible for the global financial crash [11].

Another of today’s protesters, Sasha Goodwin, said: “After last summer’s Climate Camp at Kingsnorth, thousands of people pledged to take direct action to stop this power station, and there is a huge wave of public support for the campaign. Today’s action shows how people are ready to act on their words. Any companies thinking about getting involved in the Kingsnorth project should remember the road protests of the 1990s, which cost contractors millions of pounds and prevented many proposed road projects from going ahead.

“BAM Nuttall say they need this work because of the recession, but this completely misses the point. If we keep burning coal, then we’ll lose a lot more than just our jobs – people’s homes, health, food supply, and the stability of our society are all at risk from climate change. Instead, we need to build a sustainable society, powered by renewable energy from the wind, sun and tides, which will lead to better ways to live and work. We need to make sure that this transition is a fair one, actively involving workers from the energy industry. We’re hoping to have some interesting conversations with BAM staff today about all of these issues!”

[1] TVCA is part of the Camp for Climate Action network, which set up a week-long protest camp at Kingsnorth in August 2008 – see www.climatecamp.org.uk. Today’s action is part of a national campaign, supported by the Camp for Climate Action, called the E.ON Face Off - see www.e-onf-off.org.uk. Previous actions have included the occupation of E.ON’s UK head office by protesters dressed as Santa Claus, and actions at E.ON stalls at University recruitment events which led to the company abandoning their graduate recruitment drive.
[2] BAM Nuttall is a construction and civil engineering firm owned by the Royal BAM Group
[3] Carbon Dioxide Information Analysis Center:

http://www.tyndall.ac.uk/publications/briefing_notes/bn17.pdf
[9] Generating electricity from coal produces about twice as much CO2 per KWh than generation from gas. Therefore, a 25% reduction would still leave coal about one and a half times as polluting as gas.
[10] See for example

Four cop vans, an ambulance (to deal with the person superglued to the front door) and a police helicopter now on the scene. Passing Conservative councillors milling about expressing their outrage that the boys in blue are doing this rather than catching burglars. 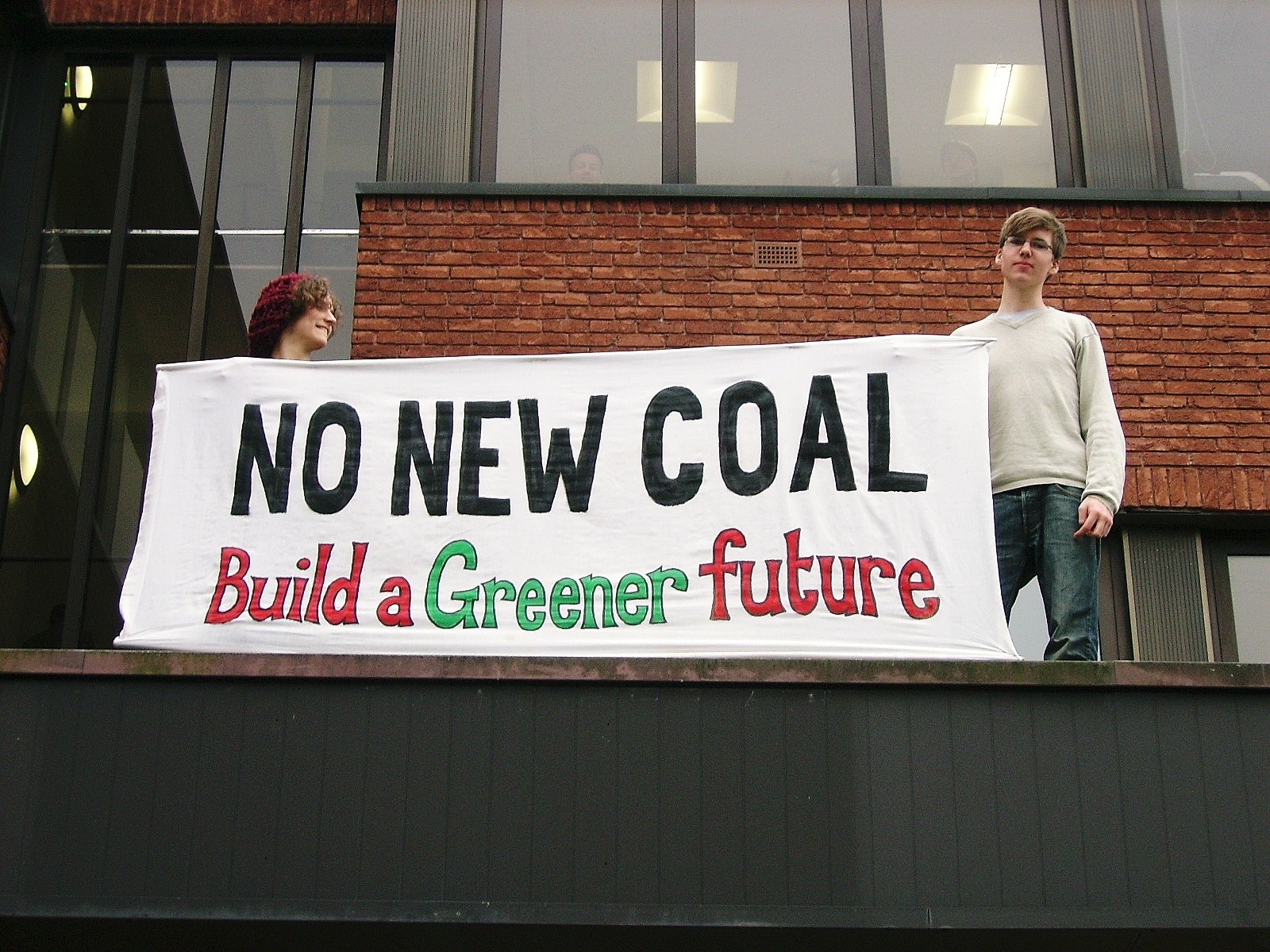 Up on the ledge 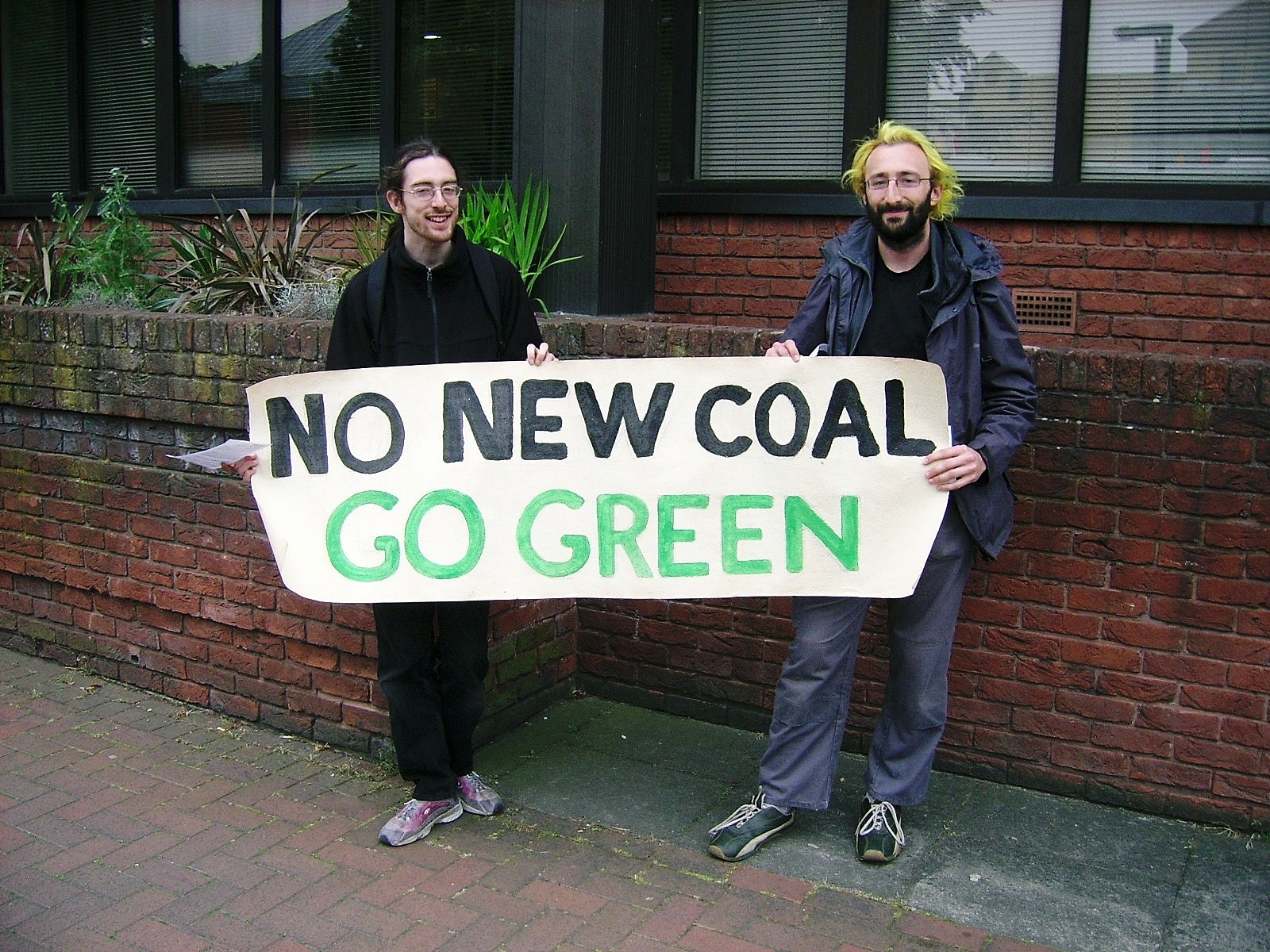 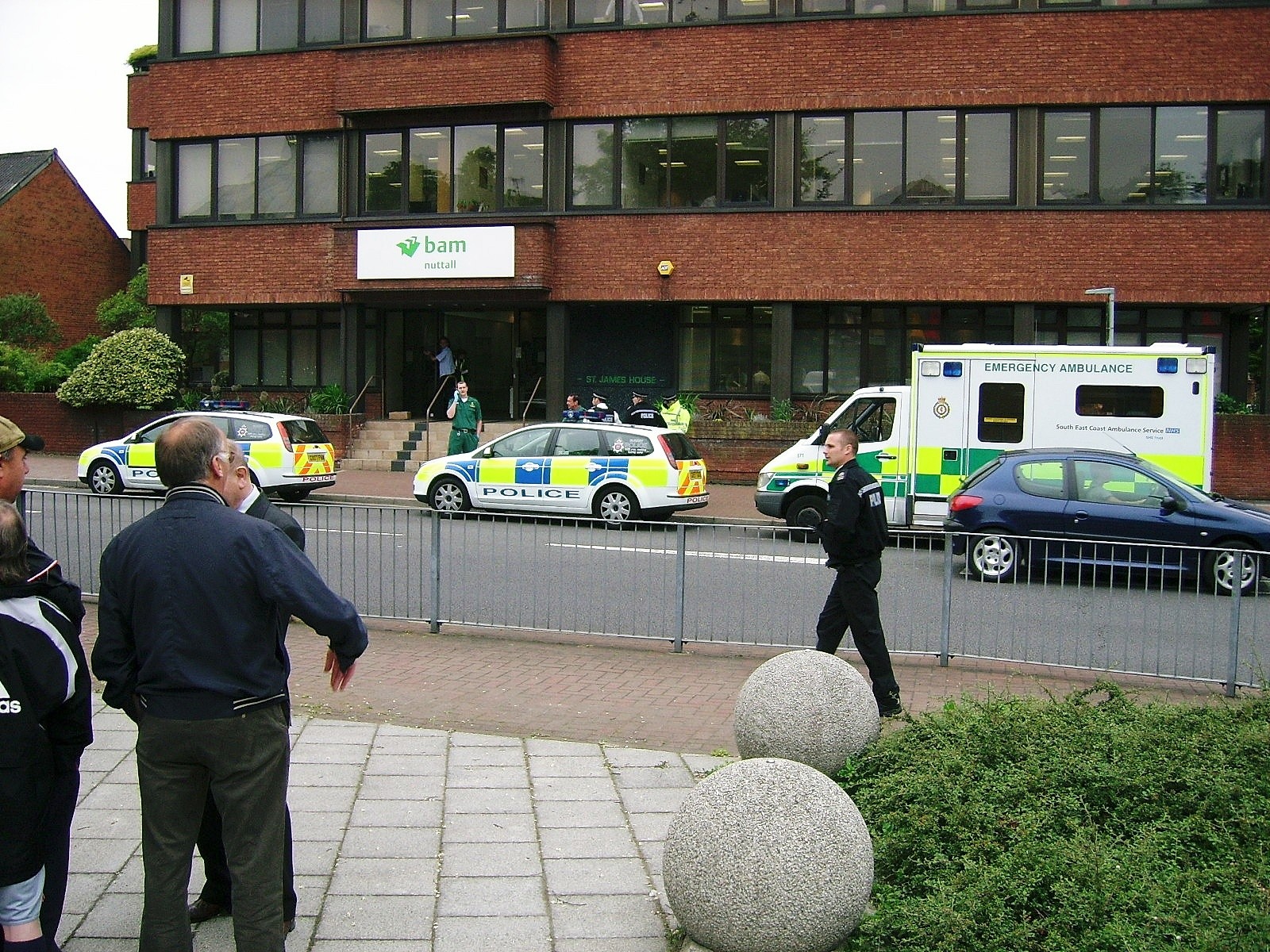 Several arrests, including one passer-by who wandered over to talk to the people up on the ledge and promptly got nicked. Honestly.

Those arrested for this action were recently all had their cases thrown out at trial ('no case to answer') apparently due to a legal ambiguity in the wording of the law when applied to the inside of buildings: