Hoping a fair and safe climate change deal is on the cards!

A short story about Claire Arthur, an activist who decided to deliver a giant 'good luck' to Gordon Brown this week after hearing that he intended to go to December's UN climate talks in Copenhagen. 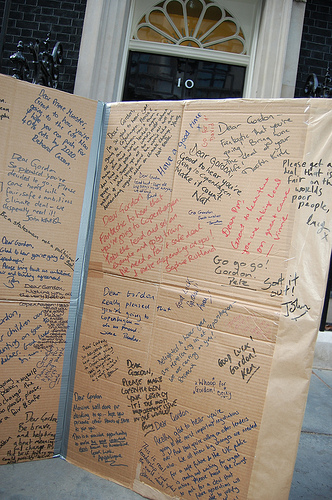 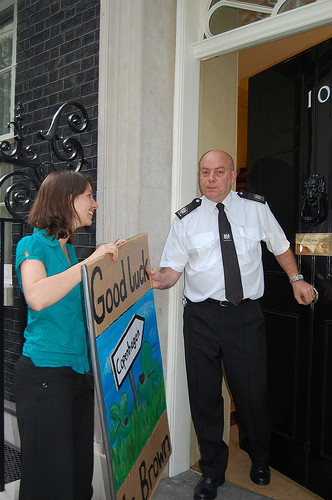 When Oxford resident and activist Claire Arthur heard the news last week that Gordon Brown intends to go to Copenhagen in December for the hugely important UN climate change negotiations, the 25-year-old felt inspired.
With a little help from some friends Claire used her artistic flair to create a giant ‘good luck’ card for Gordon Brown, urging him to do all he could to secure a new, binding world deal to combat climate change.
The card features dozens of messages from Oxford residents who feel equally moved to ask that the Prime Minister set an example by traveling to Copenhagen on train – rather than plane – before leading the negotiations on a successor to the Kyoto Treaty.
Claire said: “The fact that climate change is having such a huge impact on people’s lives around the world already has made me think twice about how we talk and think about the issue.
“This year is vitally important for securing a global climate deal that puts people at its heart.
“There is a lot of stalling and a lot of slow progress, but the good news is that Gordon Brown is saying he intends to go to Copenhagen and is calling on other world leaders to go as well.
“I was talking about this with my housemates the other night and we really wanted to do something. We decided to make a ‘Good luck in Copenhagen’ card and I have had it signed by friends and colleagues with lovely messages – like asking for a 40 per cent [carbon] cut by 2020 that scientists are saying is such a big part of making a deal safe.”
Claire delivered the card to 10 Downing Street on Monday afternoon (28th September) and hopes that it will inspire Gordon Brown to not only go to Copenhagen, but to make sure that the talks there do not become another missed opportunity.