At last a reason to get excited about a General Election!

The APP Hunt the Hunt Hag at the General Election.

The APP v HLS – Kick them in the Djangoly's. 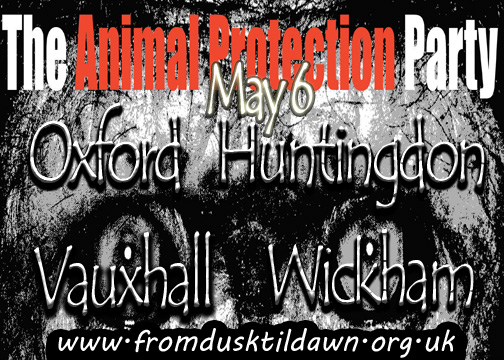 The APP & The Genaral Election


General Elections are not as a rule anything to get excited about but we are executing a plan to improve things! With the election looming the Animal Protection Party is in the process of distributing over half a million leaflets to homes in our four target areas, Huntingdon, Oxford, Wickham and Vauxhall. We are standing candidates in these key constituencies not to reach for a slice of the power pie but so we can take some of that power from the bad guys. This is a positive campaign. We have no manifesto, we have no policies but we are determined to make a point. Keith Mann is standing in Oxford against the vile Evan Harris, Sarah Coats is standing in Wickham, Carrie Holliman in Huntingdon against Jonathan Djangoly and Jim Kapetanos in Vauxhall against Kate Hoey.

Every home in these areas will get our leaflets through their letterbox explaining, for example, of the horrors befalling 500 animals each day in the name of product testing at their local Huntingdon Life Sciences and the MP's role in this. We have activists on the streets and are knocking on doors. In just four weeks we hope to get our message out to over one million people who happen to be in key campaign areas. This in itself is a significant achievement but it needn’t end there. The potential remains for us to unseat one or more of these characters and send a strong message to others like them who defend the indefensible.

The election process dictates that potential candidates need 10 local residents to sponsor them. In each of these constituencies by knocking on doors and telling residents that we are standing in their area to unseat their current MP we have gathered the names we needed in a single street. Think about that. Ten random members of the public in Huntingdon have given their full backing and their personal details to APP activists who'd knocked on their door. And Oxford and Wickham and Vauxhall. Most of what most people hear about people who care for animals is that they’re extremists but when they hear it from the horse’s mouth, so to speak, it doesn’t sound quite the same. We believe that compassion is at the core of our society however much human behaviour is manipulated and in four years time we aim to do this on a much greater scale.

If you can help leafleting in any of these areas any time in the next few weeks or can help fund this effort please check in and help us inform as many people as possible of what we are trying to do and why.