SIX members of campaign group Trident Ploughshares protested silently inside the lobby of the Houses of Parliament in London for two hours on Thursday (3 June), calling upon the incoming government to honour its disarmament commitments by scrapping the Trident nuclear missile system and its planned replacement and signing up to a Nuclear Weapons Convention. 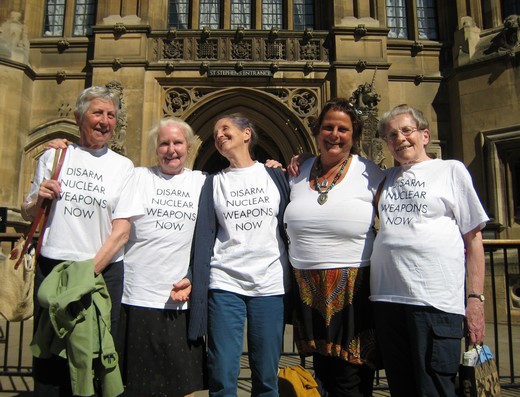 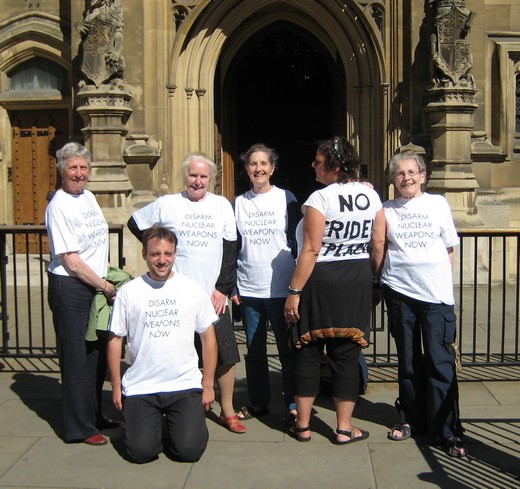 At precisely 2pm, the five women and one man revealed white T-shirts with the slogans “Disarm Nuclear Weapons Now” and “Scrap Trident Replacement” and stood in the centre of the lobby in a circle facing outwards so that passing MPs and members of the public could read the slogans on their T-shirts. Shortly before the protest began, the six, from Cornwall, Essex, London and Oxford, separately submitted formal written requests to see their respective MPs, none of whom appeared or sent messages of apology in the more than two hours of their presence.

Parliamentary police officers, a number of whom attended the scene, had discussions with the Serjeant-at-Arms, and a police inspector spoke to one or two of the protesters, but no attempt was made to remove them. Among those who passed the protest were former Deputy Prime Minister John Prescott and former Foreign Minister Ivan Lewis MP. East London MP and former Environment Minister Jim Fitzpatrick had a discussion with one of the campaigners. The protesters left of their own accord shortly after 4pm and were promptly escorted out of the building by police officers.

Daniel Viesnik, 35, from London, said: “The new government has ordered swingeing public spending cuts in the wake of the economic crisis, yet once again we see spending on nuclear weapons and submarines being ring-fenced. Aside from the exorbitant price tag of up to £97bn for replacing Trident, the fact that military generals now describe Trident as ‘militarily useless’ and a clear majority of the public opposes its replacement, there can be no moral justification for retaining and continuing to deploy these indiscriminate weapons of mass murder for decades to come.”

Sarah Lasenby, from Oxford, added: “The argument that we need nuclear weapons for our defence could equally be adopted by any country in the world, from Iran to North Korea. To retain and deploy Trident indefinitely is a material breach of our disarmament commitments under international law, and to do so whilst condemning, punishing and threatening military action against any other country accused of seeking to develop their own weapons of mass destruction is hypocritical.”

Michal Lovejoy, from Cornwall, added: “It is time for the Government to take its disarmament obligations seriously and heed the global call for a Nuclear Weapons Convention.”

Today’s action was a repeat of one that took place last July involving fifteen members of Trident Ploughshares and Women in Black. [2] It comes in an important week for nuclear weapons campaigning, with pressure mounting on the Government to include Trident in the forthcoming Strategic Defence and Security Review and begin negotiations for a Nuclear Weapons Convention. [3]

1. Trident Ploughshares is a campaign to disarm the UK Trident nuclear weapon system in a nonviolent, open, peaceful and fully accountable manner.

2. Trident Ploughshares and Women in Black take their concerns about replacing Trident to Parliament

3. On Tuesday, the chair of the Campaign for Nuclear Disarmament, Kate Hudson accompanied a number of new MPs to Downing Street to deliver a letter to the new Prime Minister, David Cameron calling for Britain to support a Nuclear Weapons Convention and include Trident in the forthcoming Strategic Defence and Security Review.

Also on Wednesday, the Unite union conference backed an executive statement calling for the scrapping of plans to replace Trident.

Saturday 5 June is the Global Day of Action for a Nuclear Weapons Convention, called by the International Campaign to Abolish Nuclear Weapons, with activities planned at Faslane, Scotland and Aldermaston, England. This follows on from the nuclear Non-Proliferation Treaty Review Conference at the United Nations in New York, which ended last week.