West Berkshire Council has approved another multi-million pound nuclear warhead facility at the Atomic Weapons Establishment (AWE) at Aldermaston, England despite 1331 objections from members of the public. The new hydronamics facility, or 'Project Hydrus', will form an integral part of the £5bn+ ongoing modernisation of AWE designed to equip it for producing a new generation of nuclear warheads, with no public consultation or parliamentary scrutiny or debate. 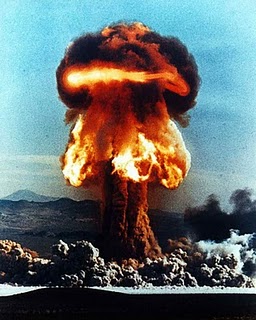 There will be no public inquiry into this or any of the other applications related to the ongoing development programme at the (now two-thirds US-owned) Atomic Weapons Establishment (AWE) sites at Aldermaston and nearby Burghfield, which AWE has stated is on the scale of Heathrow Terminal 5, and which is intended to enable the development of a new generation of nuclear warheads. Over £1bn a year (or £3 million a day) of public money is currently being spent on AWE, with no public consultation or parliamentary debate or approval, and barely any public scrutiny.

The Orion laser, an integral part of the new developments at AWE Aldermaston, is said to be due for a royal unveiling later this year.

Might this be the time to step up the direct action at Aldermaston, and against Trident and its planned £97bn replacement in general?

The Devonport Big Blockade, organised by Trident Ploughshares, will take place in Plymouth on Monday 1 November 2010:

Resistance to "Factory of Death" continues