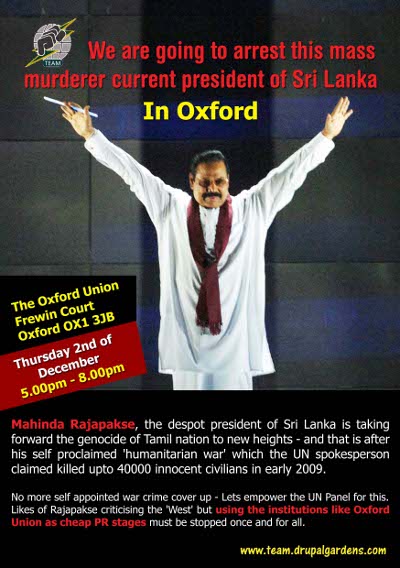 Mahinda Rajapakse, the despot president of Sri Lanka is visiting UK, sometime on either Monday 29th or Tuesday 30th November 2010. This is 'official' according to the previously outspoken Sri Lankan newspaper Sunday Leader.

[It is noteworthy, this newspaper and its editor are under lot of pressure at the moment due to an ongoing case in the corrupt Sri Lankan courts system where the army commander who oversaw the 'May 2009 Massacre' of Tamil civilians is being investigated for blaming responsibilities for war crimes on the Mahinda Rajapakse and his brothers. The ex-army commander is currently imprisoned though he is somewhat the 'de facto' opposition leader of a corrupt parliamentary system. As of 28th November 12 pm GMT this is suspiciously the only source of this visit to the UK]

Clearly this is an expensive PR excercise [1] from some one who is hoodwinking the people of Sri Lanka with anti-Western sentiments but is now forced to live up to the larger than life imge he has portrayed through absolute media control. It is a mess that is creat

All what we know for sure is that this is a private visit - not a state visit. There is a genocide of the Tamil people who are a nation [note: not a minority as pushed aside by the creation of Sri Lanka and a completely new constituion in 1972] and as pointed out below from the Hansard of 27 th October 2010, there are the most serious allegations levelled on this despot ruler.
The most unusual aspect of the charges against Mahinda Rajapaksa is that he is in denial that **not one civilian was killed** on a war waged under the crude propaganda that it was a 'humanitarian war'. The death toll varies. In fact the whole number of people living in the then well developed Vanni area was so famously under quoted by the Sri Lankan government (~80,000 people! instead of a true figure of above 300,000). Anyhow the UN spokesperson for the period of the massacres of early 2009, Gordon Weiss, claimed that up to 40,000 civilians were killed. The real figures are possibly much more and this is not taking into account what happened post May 17 2010.

It is fair to debate as to who was responsible for such huge amounts of deaths. But the complete denial of such deaths is an insult to humanity.

The facts are Mahinda Rajapakse, a commonwealth 'leader', hasn't made an official visit in his first term of office.
Last time he visited UK a secret meeting was held in Chequers (according to the then foreign minister, Mangala Samaraweera pictured in the middle)

Mahinda Rajapaksa has now manipulated the electoral system in Sri Lanka now so that it is possible for him to become president as many times as he wishes. Many see this as a making of a dictatorship.

"Siobhain McDonagh (Mitcham and Morden) (Lab):As a former PR man, does the Prime Minister agree that no matter how much Bell Pottinger tries to spin the
27 Oct 2010 : Column 312
Sri Lankan Government, the demands for an international independent war crimes tribunal intensify as more evidence of alleged assassination and civil rights abuses comes out?