The appeal of climate activists

Twenty activists, many of them with long links to Oxford, have launched an appeal to challenge their convictions of conspiracy to commit aggravated trespass. 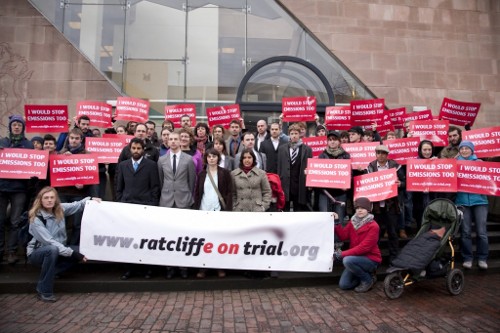 Supporters of the accused at the original trial

The twenty were amongst 114 people arrest near to the Ratcliffe-on-Soar power station in Nottinghamshire in what was described as 'the biggest pre-emptive arrest in British history.'

Of the 114, twenty six people were charged. Twenty were found guilty of conspiracy to commit aggravated trespass in December and sentenced in January.
# Judge sentences 18 of Ratcliffe defendants:

The remaining six, all of whom pleaded not guilty, were being tried in January. The case against them collapsed when was revealed that an undercover cop – Mark Stone/Kennedy [1] had evidence that could show their innocence. Evidence that the police kept from prosecutors and the defence. One of the six defendants posted his reflections.
# Undercover and over-the-top: The collapse of the Ratcliffe trial:

This evidence was not known to the prosecutors or defence of the 20 activists that had already been sentenced. An independent inquiry earlier this year caused huge doubt as to the safety of these convictions. Keir Starmer, Director of Public Prosecutions, even contacted the activists' legal team to offer support in overturning the convictions. This has led to the launch of the 20 activists' appeal today.

The activists issued a joint statement: "Our case continues to demonstrate the state's consistency in putting the interests of unlimited growth and unfettered capitalism before the rights and needs of people and planet. Our story began with the largest pre-emptive arrest of activists the UK has ever seen back in April 2009, and has since seen a random selection of us dragged through costly legal processes. The resulting consequence was 20 of us being convicted and sentenced for a crime we did not commit … The launch of this appeal is just one small step in the fight back against the systemically political nature of policing. We stand in solidarity with all those who face repression for daring to take political action."

And all this on the same day that PC Harwood has been charged with manslaughter over the death of Ian Tomlinson at the G20 protests. Are we witnessing a sea change in how the legal system views the police and activists? I'm not holding my breath, but things are looking up compared to a year ago.

[1] Mark Stone/Kennedy was first outed as an infiltrator on Indymedia (the Guardian still seem to be unable to accept this).
# Mark 'Stone/Kennedy' exposed as undercover police officer‏:

This lead to several other facilitators being identified
# Three undercover political Police unmasked as infiltrators into UK Anarchist, Anti-Fascist and Climate Justice movements:

This is a useful guide to outing infiltrators without spreading rumours from Northern Indymedia.
# Exposing Infiltrators Guidelines: