Oxford’s ivory tower may not often feel the tremors of a thousand students pushing through police lines to protest Vince Cable‘s (non) appearance at the Exam Schools in collusion with the marketisation of higher education in Britain. However, some students at Wadham College have, this past week, renewed a tradition (alive since 2008) of bringing radical ideas into the heart of the ‘dreaming spires’, with the aim of reviving that momentum experienced in the winter of 2010 against the cuts and the Tories’ wider programme of austerity and neoliberal reform. 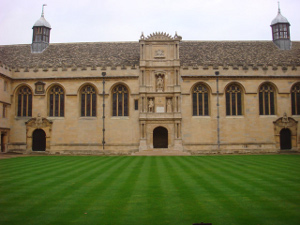 The Oxford Radical Forum in 2011 is in its 4th year of grassroots mobilisation of revolutionary ideas within ‘the academy’. This time, ORF featured sessions without precedent, touching on open source software, radical approaches to the sex industry, disability rights, and queer film from the ’30s. In addition, more predictable – and equally vital – sessions took place, given the Socialist Workers’ Party affiliation of several of the organisers, on Marxist ecology, genetic non determination, and the Arab revolutions (or ‘Arab Spring’). Peter Thonemann’s excellent session on radical history and pre-capitalist societies was unfortunately cancelled (his wife went into labour, much punning ensued); but Esther Leslie’s long awaited lecture on Walter Benjamin and mechanical reproduction was extremely well attended (and discussed).

By contrast to previous years’ focus on ‘big names’ (Tariq Ali et al), this year, local talents such as Eleanor Greenhalgh (creator/facilitator of Radical X’s latest project, ‘Open Sauce’), Sophie Roumat (dedicated immigration rights and No Borders activist) and Louise Livesy (feminist lecturer at Ruskin College) featured proudly on the line-up. Pete Speller, a local activist and film-maker, was covering elements of ORF 2011, and his footage will shortly be released as a mini film about the forum. Some portions of footage will also, we hope, appear on this website, and the ORF blog, carrying some of the complete forum sessions for all to see.