Anthony Grayling, founder of the controversial 'New College of the Humanities', which will charge £18 000, was interrupted while speaking at St. Antony's college yesterday by protesters who tried to give him all their stuff in exchange for some education. 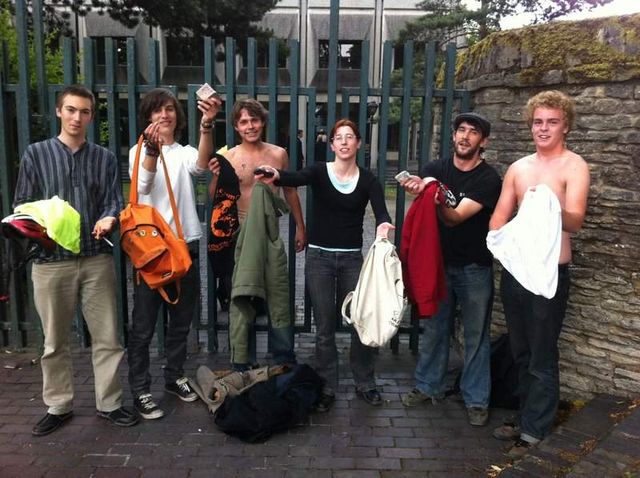 Over the last week various events featuring the academics involved in the NCH have been disrupted by students and other young people who are angry at this acceleration of the privatisation of higher education. The academic community has also poured scorn on the plans, dubbing it the "Telly Don University". St. Antony's college was clearly prepared for a protest, with large numbers of security guards and all gates into the college closed and locked.

Despite this some of the protesters scaled the walls of the college, evaded the security guards and hammered on the window of the lecture hall, offering all their worldly belongings to Grayling in exchange for some education. Empty wallets were displayed, shirts torn off, crumpled fivers pressed desperately against the window. There was a good reaction from students at the college, both inside and outside the talk. Some of those revising in the library helped to direct the protesters to the right building, and many of the people in the hall were laughing and taking pictures of the scuffles at the window.

Having been escorted out of the college twice the protesters chanted "Education for the masses, not just for the ruling classes" a few times and ate some biscuits. Greatly perturbed by this behaviour the security guards called the police. A car of CSOs followed by a van of cops arrived and watched the protesters eating biscuits for several minutes before accusing them of anti-social behaviour. By then it was raining, and knowing that the police have violent criminals that they should be out catching in the Cowley area at the moment instead of asking peaceful people nosy questions, the protesters headed off to the pub.