In the early hours of 15th June, the offices held by the Armed Forces at 35 St Giles since 1936 were targeted in an expression of independent anti-militarist direct action. Red paint, emblematic of the unneccesary deaths of innocents and servicemen and -women at home and across the world, was poured over the front door and steps in order to cause maximum inconvenience to those who make war possible while masquerading as members of the local community. This was done to impede as far as possible the continuation of business from that location.
It is hoped that the red paint will remain a permanent reminder to passers-by of the crimes against humanity that are committed just as frequently by this country as by the worst regimes which are demonised in our media. It is regrettable that our strongly-held moral beliefs have driven us to take this destructive action against a listed building, but the moral imperative requires all people to take direct action wherever and whenever possible, especially when the crimes of militarism and aggression are not merely allowed under law, but given protection and tax breaks. We have no doubt that our actions are vindicated. Mark Twain wrote that it is 'curious that physical courage should be so common in the world and moral courage so rare', and in an age when heroism is defined almost solely in terms of military obedience, the importance of individual action in line with our inner convictions is even greater.

We stand against: war, militarism; the arms trade; the reliance on hard power in international relations; interventionism both military and neoliberally economic; the maintenance of immoral and artificial national boundaries; the disproportionate spending on useless military expenditure in times of ideological spending cuts; the idea that anti-militarism is in some way impractical or naive; and above all the State and its claimed monopoly over legitimate violence.

We stand for: peace, co-operation; international mediation and diplomatic solutions to conflict; the divestment of all educational institutions from the arms trade; the decommissioning (forceful if required, but not violent) of all stages of the arms trade; and above all removal of the causes of all violent conflicts, which is to say all varieties of oppression, results of the class divisions created by monetary and profit-based economics.

We stand in solidarity with: all anti-militarist and pacifist groups and activists within a broad diversity of tactics, including especially Oxford Anti-War Action, SmashEDO, War Resisters International, the Peace Tax Seven, Bradley Manning and others too numerous to mention; anti-cuts and No Borders activists; and all anarchist, grassroots democratic, and libertarian communist groups working to create alternative institutions and smash those which currently encumber and divide the human race. 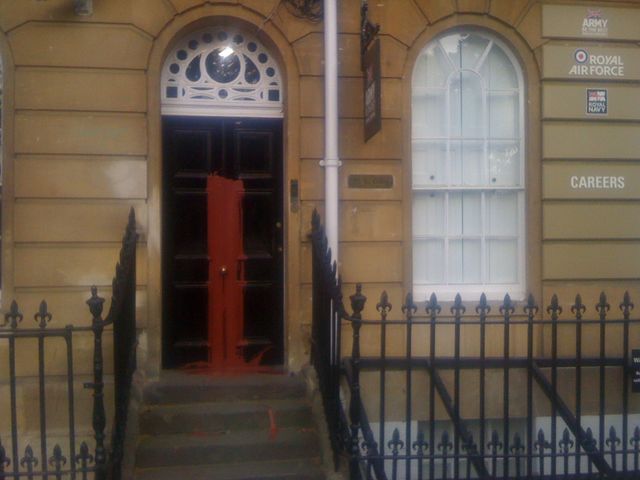 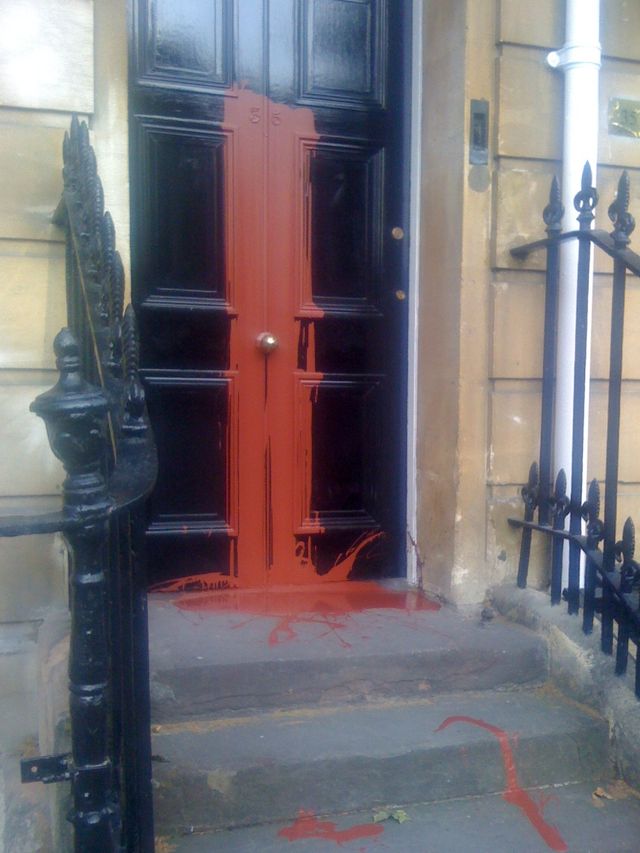 Here are some pictures for those who are interested.

Enough has already been said to those commenting negatively, but here's my two bits... The comment in the initial release about moral courage was not a boast - this was a small, largely symbolic act. What we were getting at was that it is regrettable that the physical courage in 'facing german machine guns on a french beach' is easy to come by (especially when propaganda, poor social conditions and conscription have forced millions of 'expendable' young men onto the battlefield to blow holes in each other), but the moral courage to wage peace is so rare. Standing up and being counted is an important part of anti-militarism, and deserves praise, but there are some actions for which it is impractical. There is more to an effective opposition to war than signing petitions, writing to your MP and standing around with banners, showing how proud you are of your anti-militarism, but having no practical effect on a military administration which is entirely isolated from public opinion. The Iraq STW marches are a fine example of this; praiseworthy but ineffective on their own. Martyrdom is not something we seek out.

As for all the rhetoric about needing to oppose fascism, I think perhaps this sort of thing forgets the fact that only once has the British army been used against a fascist army, and has countless times been used in nasty territorial or economic wars. It also willfully ignores the fact that the rise of Hitler and the NSDAP/Nazi party is a direct result of the First World War and the vengeance forced upon them afterwards. That's not to take any of the blame from the fash, but it was militarism that created the conditions for their rise.

I have been to Normandy and seen the war graves from the First and Second World Wars, and you can't help wondering what the fuck it was all for. If you think their sacrifice is something to be proud of, there's something wrong with you. Perhaps you should save up your money and go to Japan and think about the 250,000 civilians killed to humiliate a country that had been trying to surrender from 1942.

Don't boast of your "moral courage"

If you had done this in broad daylight and awaited arrest, you'd have deserved applause. But you didn't have the bottle to stand up and be counted. Instead, you prefer to sneak around at night, as if you are ashamed of your opposition to militarism.

You've achieved nothing - except strengthening the hegemony of the military.

"If you had done this in broad daylight and awaited arrest, you'd have deserved applause. But you didn't have the bottle to stand up and be counted. Instead, you prefer to sneak around at night, as if you are ashamed of your opposition to militarism."

, Er, no, if you'd have done this in broad daylight and awaited arrest you'd have been a right fool. Sorry 'martyr'. Congratulations Cosi for contributing the most idiotic comment on Indymedia ive seen all year.

Being arrested or doing a runner

Some people prefer actions where they will have their day in court, and quite likely be punished (e.g.

https://publish.indymedia.org.uk/en/regions/oxford/2011/05/479542.html). Others prefer actions where they don't get caught, but make a statement. I strongly believe their is room for both approaches, and both should be welcomed rather that a socially just movement falling out about tactics.

I don't see how doing an action an avoiding arrest "strengthen[s] the hegemony of the military," but I do see how criticising a relatively small divergence of tactics does.

I see the offices have been used by the military since 1936 - just as well there was no effective anti-militarist action round about then, eh?
If ever we have to oppose fascism - the real brand, not tories - I suppose we can always do sit-ins and flashmobs. That'll show the bastards. Might get some very realistic die-ins as well!

I think you comments are sarcastic - it's always a bit hard to tell in text messages since they have no tone. If you are not being sarcastic, then I apologise for misreading you and the rest of my comment might not be valid.

You seem to suggest that this action, or others such as flash-mobs or sit-ins won't really achieve anything. You may well have a good point, but I wonder if being critical of people using these tactics is the best way forward? It might work if you were to offer (or just to do) an alternative action, but to me your comment reads as slating people that did something without you offering and alternative and not criticising people (like me) that have done nothing. As I said in a previous comment, I don't think slating people for a difference in tactics will help the anti-militarism movement. If you have constructive criticism, I think people would want to hear it. If you just want to slag off people that are basically on side but whose tactics you disagree with, you are helping the militarist establishment.

my suggestion is,
save up your dinner money (juding by the write up you are under 10).
take a trip to normandy ,and dwell on the thought of your moronic deed when loking at the graves of REAL antifascists.the entire generation that gave their life to fight hitler.
no doubt when we face the same threat again you will be in jail for cowardice as throwing a tin of paint under cover of darkness doesnt really count the same as facing german machine guns on a french beach.
how the finest generation that ever lived must be turning in their graves,
given the ultimate sacrifice for people like you.

well done everyone involved!
anti fascism and anarchism is alive and well in the uk.
what an immense feeling of pride i get looking at that picture.
the raw courage and bravery of the class warriors this movement is second to none.
when the day comes we shall be victorious!

fucking ace - a blast from the past

Brilliant - this kind of thing needs to happen as much as possible.

You might be interested to know that exactly the same thing happened back in 2003 - the same army recruitment office on St Giles had its front porch/steps 'decorated' with red paint, and slogans painted around the doorway in red too.

Unfortunately, you'll have to take my word for it; I've searched high and low but can't find any record of it on indymedia or elsewhere... but don't ask how I know - I guess I just have a good memory!

lets be honest,
its a bit crap isnt it ?
and to boast about it and post pictures on the internet for the police to trace
really isnt to clever either.
rather embarrassing all round really.
why not confront some off duty army lads instead if you have a problem?
then you can discuss your concerns without them been under restriction.
sneaking out in the dark and throwing a can of paint then running away!
fantastic.

"Congratulations Cosi for contributing the most idiotic comment on Indymedia ive seen all year."

Really? You don't visit here that often then!