No Borders and refugee solidarity activists blockaded the Harmondsworth and Colnbrook immigration prisons, near Heathrow airport on 21 June to stop a mass deportation flight to Baghdad. About 70 Iraqi refugees, mostly Kurds, were due to be forcibly flown on a specially chartered flight from an undisclosed airport at 11pm. A last-minute court injunction forced the Home Office to call it off, so the blockaders decided to end their protest at 9pm, after making sure that the migration prisoners were safely off the buses. The action was an important step in escalating resistance to the deportation machine, in solidarity with the hunger strikers in Campsfield, the rioters in Brook House, the Yarlswood four, and all migration prisoners in their everyday struggle. 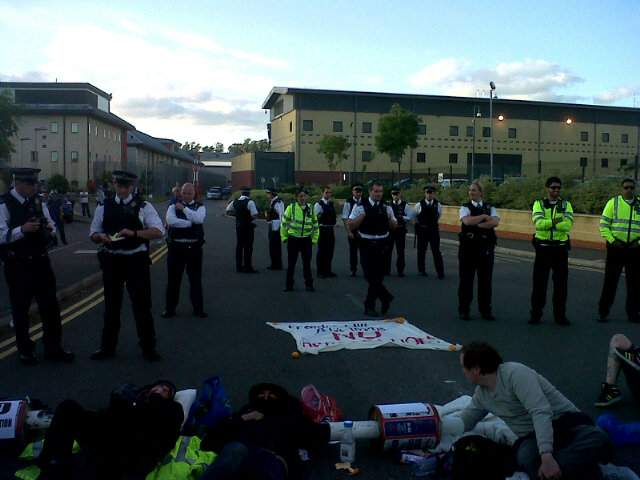 NOTE: This item has been recreated from the original, which can be viewed with comments and additions.

The blockade started at 4.45pm. The single access road to the business park housing both Colnbrook and Harmondsworth detention centres was blocked with three lock-ons, each one encasing the arms of two people in blocks of concrete mixed with steel, glass, and other materials. Around 30 more people supported the blockade with bodies, banners and noise. They included members of the detainees' families and others from the Iraqi Kurdish community. As the afternoon went on, more people arrived following call-outs on the web, texts and tweets. A few locals passing by also stopped and joined in.

Meanwhile, the Immigration Advisory Service lawyers, representing many of the deportees, were hard at work pursuing a judicial review on the basis that the forced deportation to Iraq would breach deportees' human rights under internationl law. Evidence of recent escalation in fighting in Kurdistan and other regions contradicts the Home Office's claim that parts of Iraq are now "safe" (see here for more).

Earlier in the day, prisoners had been moved from other detention centres across the country to the Heathrow centres to get everyone together for the flight. These included more than 20 held in Campsfield immigration prison near Oxford, who were on hunger strike. Shortly after 4pm, prisoners were told that they were about to be moved onto buses headed for the plane. Screws from contractors Serco and GEO, who run the two Heathrow prisons, started to round up the first coach load. Another company, Reliance, supplied the guards for the buses, usually two per prisoner. (G4S lost the contract for deportation muscle after the killing of Jimmy Mubenga last year). The coaches were hired from subcontractors WH Tours and Woodcock Coaches, both based in Crawley near Gatwick.

Around 5.15pm, half an hour into the blockade, the first word came through that the judicial review had been successful and won an injunction against the mass deportation. But it wasn't yet clear whether the injunction applied to the whole flight or just to some of the prisoners, and we were still getting reports of some prisoners being loaded onto coaches. In the past the Home Office has thrown legality to the wind and filled up extra spaces on flights with new people, even though they had not been served with so-called removal directions (official deportation order letters) giving them a chance to appeal. We were determined to continue the blockade until we could be sure the whole flight had been stopped.

It took half an hour for the police to turn up. When they did, they looked overwhelmed and confused, they made no attempt at first to clear the blockade, just stood watching with the irate Serco and GEO staff. It was only at 8pm that a new "heavy mob" turned up from City of Westminster Police, including one cameraman. The senior officier in charge read a Section 14 of the Public Order Act notice, ordering us to move across the street or be arrested. Next we were expecting the specialist lock-on cutting team. Besides reinforcements in various materials, the lock-ons featured glass tubes around the arms, and nails ready to smash the glass under pressure. People in the lock-ons could be seriously injured by cut arteries unless specialists removed them with extreme care. It goes against all instincts and dignity to lay down and passively put your life in the hands of cops. But it has proven an effective tactic which can hold a blockade for several hours.

Meanwhile, sometime after 7pm, it seemed that the screws, backed by lots of cops with dogs, were trying to get round the blockade by opening an old unused gate round the back. The exit was too narrow for coaches to pass, but it seemed they were trying to take people out in smaller groups using Reliance security vans. Leaving some supporters for the lock-ons, others went round the back to try and stop them. There we faced a stand-off with about 15 police plus the corporate thugs of Serco, GEO and Reliance.

As the blockade held, it also obstructed the arrival of more Reliance vans as well as the shift change, with many screws clearly pissed off for not being able to leave or get in, and some trying to drive through the lock-ons. More information was coming in on the legal situation and the events inside. Eventually we got confirmation that the 20 prisoners who had been put on the first bus to the airport had been taken back to the wings. By 8.40pm virtually all the erstwhile deportees were accounted for: ten people had agreed to return voluntarily to Iraq, none of the others would fly. So we decided to lift the blockade. There were no arrests, and we even got to keep the lock-ons for next time!

After we moved off, we got to talk on the phone with some of the prisoners who had been scheduled for the flight. They were cheering and clapping. Word will spread around all other immigration prisons now about the action. The cancellation of this flight is an important victory in the struggle against deportations. A charter flight like this costs the Home Office around £150,000 for the plane, security, etc. Legal action was sucessful this time, but it is not always the case. The blockade may have also helped buy lawyers time to win the injunction, and then to ensure it was applied to all the prisoners, who have to be individually included by name. The blockade also caused further costly disruption to the two detention centres.

But most importantly, perhaps, we hope the action will inspire further acts of resistance, both within and without. This is not the first deportation blockade in the UK, but it is the first since Colnbrook was last blockaded in May 2009. Since then, mass deportation flights have become increasingly frequent, and now also include charters coordinated by the EU joint border police Frontex, which involve several European countries. But resistance is building. Across Europe, activists on the outside have organised numerous blockades and other actions (e.g., Belgium 1 | Belgium 2 | Sweden). The main role of these actions is perhaps as support and solidarity for prisoners on the inside, who have been rebelling with riots and sabotage as well as hunger strikes (here | Italy | Belgium | Greece | Australia etc.). We have much to learn and build. We hope that yesterday at Heathrow revitalises the struggle against the deportation machine in the UK.

Activists from the No Borders network.