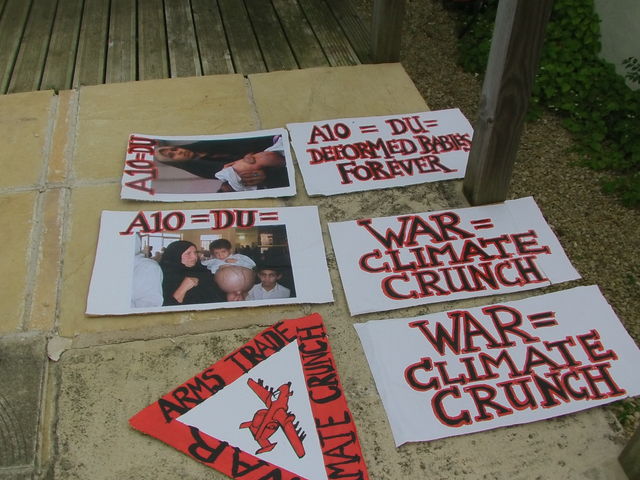 Protesters pitched up at the gates to the Fairford Air Tattoo today as part of a weekends protest against an event that glorifies war and corporate excess and are set to distribute tens of thousands of leaflets.

The protests have targeted the enormous greenhouse gas emissions from the event and how it negates the efforts that thousands of other responsible citizens are making across Gloucestershire to cut their own carbon footprint.
They have also protested against the presence of the American A-10 ground attack plane that was on display. The A-10 is designed specifically to fire depleted uranium shells. This has resulted in thousands of deformed babies being born across Iraq along with a massive risk in childhood cancers. A-10 have also been deployed in Libya.

The use of depleted uranium is a violation of the Geneva Convention and protestors have demanded that Gloucestershire police investigate the pilots. However Gloucestershire Police have advised that this is beyond their jurisdiction.
They have also protested against the presence of Saudi Arabia, whose Hawk Jet display team is present. Saudi Arabia is currently violating human rights in Bahrain and Yemen and at the show corporations are actively trying to sell more high technology weaponry to them. Saudi Arabia also has the audacity to demand a slice of the $100 billion fund set aside for climate change adaption, despite it lobbing against climate change agreements and squandering its resources on air displays around the world.

Protesters would like to thank the police for their concern that these vital issues being raised may have put us in danger and the protection that they provided.

There are some very specific and disparate things being protested against here, e.g. CO2 emissions from the air show, the A10 warthog, depleted uranium shells, Saudi Arabia generally.

It strikes me that all of these things are actively supported by the GOVERNMENT with your tax. Yet there seems to be no animosity to GOVERNMENT, on the contrary the protesters see the POLICE an benign. It should be remembered that the vast majority of of all murders world wide are committed by GOVERNMENT officers rather than privet criminals.

It strikes me also that while ever there is support for GVERNMENT to control us and and force us to pay tax, the GOVERNMENT will have our support to kill as it sees fit.

On one hand the protesters are treating the symptoms rather than the disease, and on the other hand having fond feeling to their captors.

free man (as in freedom, not as in free handout)

But surely you gotta draw attention to the symptoms in the first place, or no-one will even realise the disease is there!

...it was quite an enjoyable day after the rain stopped, and fortunately no protesters ruined it.