Whose media? Our media! (repost) 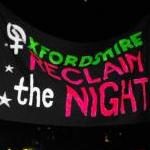 Less than 20 hours to go until Oxfordshire Reclaim the Night 2011 and I’m running through a mental checklist of ‘things we have to sort out before the march’. We’ve printed off chant sheets, found the banners in the attic… But wait! We haven’t arranged for someone to film the march and make citizen media reports from the rally! I ring a member of Oxford’s Indymedia collective and blag a little digital video camera, then I call a friend who’s coming on the march and ask her if she’ll meet me in advance to pick up the camera and be our videojournalist for the night. Then the Indymedia guy rings me back and reminds me to make sure I remind people with cameras to email their photos to us as soon as they can, to go with the report I plan to write after the event…

There are a few reasons that feminists need to start using the alternative media channels to tell our own stories:
* We need to create media reports of our own that tell the stories of our hard work and actions, not rely on the mainstream media with its own agenda to cover our action (because often they won’t or they’ll do so in a way that is highly unsatisfactory)
* We need to create a public archive of our hard work and our fab actions and this is one way to do it – and in the process of creating our alternative media reports we are creating archivable material
* We need to educate other activists who use these channels about feminism, alert them to our presence and inspire them with our brilliant activism – basically increase the visibility of feminism within the resistance movement(s) in the UK and further afield. The wider activist scene is filled with potential allies, but they don’t know much about feminism, and they don’t think that there are many (or event) feminist activists.

I realised the importance of archiving our activism earlier this year when I was asked to write a paper about the history of the revival of Reclaim the Night in Oxford, and a guide for future organisers. I realised that all I had to go on were our stories and the short write-ups we’d put together for the City Council Safer Communities Partnership grant reports.

The local mainstream media in Oxford do usually cover the annual Reclaim the Night march, and I gather that local media cover local marches in other places, too, but these stories don’t reach feminists elsewhere, and don’t spread the excitement and inspiration of local feminist activism. And like everyone, I find it dispiriting that there’s so little media coverage of London Reclaim the Night and the Million Women Rise marches. When feminist activism is covered by national media, there’s always a sense that they’re not telling the whole story.

Feminism has a very low profile amongst activists – partly I suspect because a lot of young activists (men and women) feel that ‘the battles have been won’ (if only I had a penny for every time someone had said that to me…) But also because they never hear about feminist activism.

So for all these reasons, I want to encourage (and if I have to, beg, plead with, implore) everyone involved in any feminist activism to engage with alternative media – local and national! Start with Indymedia which has both a national hub and local collectives (find your local one on the list). Reach out to blogs that are not specifically feminist, such as Topsoil , Bright Green and others. Post action alerts and reports after the event. Write feature stories. Make short films, then upload them to youtube or vimeo and post links to them to VisiononTV.

It’s not always going to be easy – moving out of our safe world of feminist blogs can expose us to an irritating lack of understanding about feminism (check out these recent comments on Oxford Indymedia) (And yes, I do get fed up with having to educate other activists as well as having to smash patriarchy in mainstream society.)

But this year, I want to be able to hear about all the amazing Reclaim the Night marches around the UK easily and quickly, in reliable films and blogs made by feminists for activists. I want to hear the whole story from my sisters’ own citizen reports.