A group of protesters unfurled a banner reading "Stop Deportations" and heckled councillors at the Election of the Lord Mayor today at the Town Hall. The action was done by a group from Oxford No Borders standing in the public gallery. 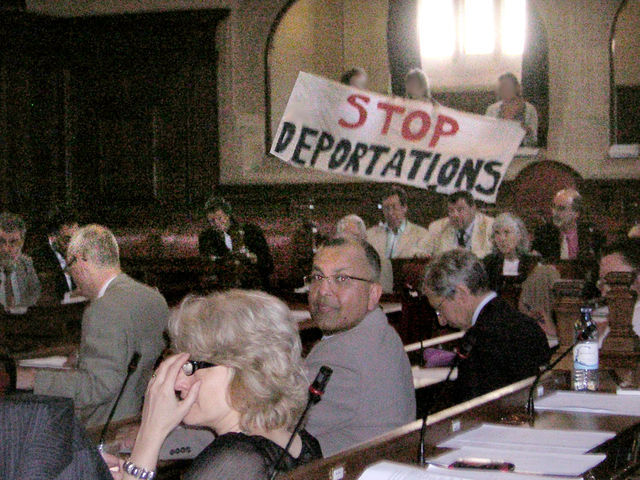 The incoming Mayor, Alan Armitage, works as a member of a panel recommending judges on whether to deport foreign national prisoners. The protesters pointed out that this term is used in a blanket way to demonise and criminalise migrants even for such minor offenses as not having the correct papers.

"This two-faced hypocrite will visit community groups as Mayor while at the same time recommending that some of their members be deported." said Bernadette Greenway, "A vote for him is a vote for a racist system."

The meeting had to be adjourned while security guards ejected the activists. Some councillors later came outside to discuss the issue, and several expressed gratitude at being alerted to it, having previously been unaware.

[1] Oxford City Council currently has a policy calling for the closure of Campsfield, the Immigration Detention Centre near Kidlington which is a key part of the deportation process. In contrast, Councillor Armitage is directly implicated in Britain's racist immigration system; the protesters argue that this role is incompatible with Council policy.

[2] Asylum seekers are frequently detained at random at all stages of the asylum process, and detention is used commonly before deportation. Many are refugees fleeing danger, torture, poverty and even death from countries such as Iran, Iraq, Afghanistan and Somalia. They are held without charge, without time limit, without proper reasons given, and without proper access to legal representation. Deportation charter flights to countries such as Afghanistan have been repeatedly cancelled recently as a result of the spiralling security situation in the country, although ironically it is the safety of those carrying out the deportations that seems to be the concern, rather than that of the deportees.