OxIMC film night for November: Even the Rain

We're back in on Sunday 4th November with the Spanish language film También la Lluvia (Even the Rain) a film from 2010 and set in Bolivia and based on a screenplay by Paul Laverty and directed by Iciar Bollain. From 7pm we'll be showing the latest citizen journalist film shorts from the streets of Europe depicting the people's struggle against the 'austerity measures' and sinking economies. 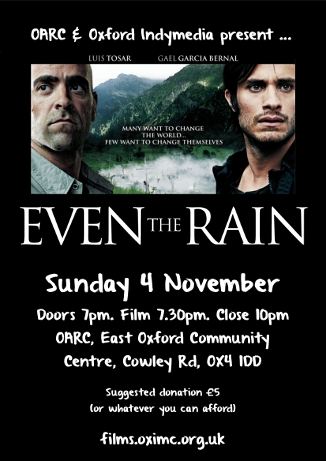 Even the Rain is about a Mexican director and an executive producer Costa who travel to Bolivia to shoot a film depicting Christopher Columbus's conquest. The two men find themselves entangled in a crisis when they discover that one of their main actors is involved in leading the Cochabamba Water War (La guerra del agua de Cochabamba). Battles between the authorities and protestors opposing the privatisation of the city's water supply, eventually led to deprivitisation.