War: "Academic" propaganda ... is a crime

If media or academia really published a balanced "opinion" over war, they would always have to include, a genuine consideration of...law.

In the year 2014, the deliberate and cynical use, by academics, of ...propaganda, that leads to murder, must be legally challenged. 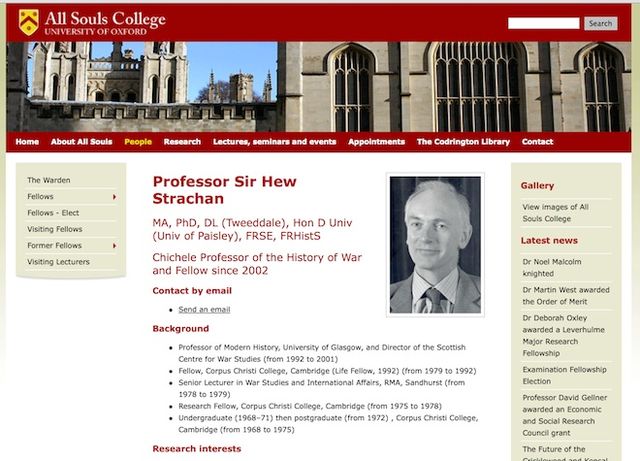 
If media or academia really published a balanced "opinion" over war, they would always have to include, a genuine consideration of...law.


In the year 2014, the deliberate and cynical use, by academics, of ...propaganda, that leads to murder, must be legally challenged.


Britain lacks any clear military strategy, “bungled” its involvement in Iraq and Afghanistan and is guilty of “strategic failure” over Syria, a senior adviser to the Armed Forces has said.

David Cameron failed to deliver a British military intervention in Syria because of his “seat of the pants” approach to the issue, according to Prof Sir Hew Strachan.

Sir Hew, one of Britain’s leading military thinkers, has condemned the way in which recent British and American governments have approached the use of military force.

A lack of clear thinking about strategic objectives meant that the costly wars in Iraq and Afghanistan were mishandled, he said.

Sir Hew, Professor of the History of War at the University of Oxford, has advised the Coalition on its treatment of the Armed Forces. He currently sits on the Chief of the Defence Staff’s Strategic Advisory Panel, and advises the UK Defence Academy, which trains senior officers.

He makes the observations in a book, The Direction of War, to be published next week.

The book concludes that governments on both sides of the Atlantic have little or no idea of how to achieve their long-term ends through the use of military force and those ends are often poorly defined or not defined at all.

“The understanding and meaning of strategy has got lost, confused or become stripped of meaning,” he said. “Without strategic thought (or clear understanding of strategy) our execution of war aims is inevitably bungled – we didn’t know what to do or how we wanted to do it in Iraq and Afghanistan.”

He also castigates David Cameron and Barack Obama over their handling of Syria.

The UK and US backed away from a military intervention in the Syrian conflict last year after domestic controversy.

“This criticism applies equally to the UK and US. Presently we can’t make up our minds in Syria.

“We cannot articulate how our use of military means would deliver on a political end.

“The problems both Obama and Cameron have had in Congress and in Parliament have been indicative of the loose use and understanding of strategy.”

Mr Cameron made his decision after failing to persuade the House of Commons to back intervention. Sir Hew said: “The seat of the pants way (with insufficient preparing of the press or Parliament) in which our approach to Syria was handled showed a total absence of strategic thought and is, almost, another case study in strategic failure.”

The professor’s verdict may embarrass ministers, but his analysis has been backed by senior British officers.

One said: “We as soldiers have a responsibility to ensure the options and advice we give are good and sensible material to make decisions from.

“On the statesman side, over the last 10 years, I don’t think they have been terribly clever about trying to understand the art of the possible.

“Too much has been taken for granted and not enough time taken to understand the nature of the problems we are throwing the forces into.”

This is a formal complaint against Professor Sir Hew Strachan, who is very clearly hiding behind the label of academia, to actively promote and encourage the public to become involved in being complicit in, and committing, criminal acts, that lead to the brutal murder of innocent civilians, in illegal wars.

It is more than quite disgusting, to any decent and civilised human being, that Professor Sir Hew Strachan, who is far from a "thinking man", promotes through your university, a quite criminal "strategy" of war, that does not include any mention whatsoever, of...law -because- what he is saying, is easily understood as merely, the most revolting ...propaganda.

Clearly Oxford University could not defend any such "teaching", in any court of law, before a jury of reasonable people.

It is widely known to all right thinking people, the world over, that the far from Common-wealth (for example) has involved nothing more than the most brutal savagery, by the British Establishment, of which Oxford University, should be more than thoroughly ashamed.

It is obvious that any objective analysis of the First World War would only conclude that a financial “ideology” called Zionism, used cordite to buy off the British Establishment in the First World War, as a precursor to the Second World War, and the continuing Western conquest of the Middle East, and North Africa.

The stench of this financial Zionism has clearly permeated throughout some very rotten corridors, of British academia.

For Professor Hew Strachan to now openly encourage the British Establishment to commit further war crimes through (for example) overt military intervention in Syria, when the illegal wars of aggression in Afghanistan, Iraq and Libya, along with extraordinary rendition and torture, already involve a very many serious war crimes, is nothing more than...criminal.

It has -never- been legal to visit endless wars of aggression on entire civilian populations, who have never had anything to do with the financial squabbles of the few.

I require written confirmation from Oxford University that they will a) sack Professor Sir Hew Strachan and b) stop promoting criminal acts, of illegal wars, c) including through the medium of propaganda, as d) the "education" of their... students.

Frankly, "academia" serves no useful purpose, to humanity, if it does not, as a starting point, seek in all it does, to harness real law, to protect life.

I strongly recommend that in the Year 2014, those who run Oxford University, grow up, and join the real world, of the human race.

By no stretch of the imagination, should promoting criminal acts, be called an "education".

We will continue to bring law, into all we do, to protect life.


There is very clearly the...criminal intent by some "academics", to knowingly use ...propaganda, to murder innocent civilians in illegal wars of aggression, that they know, are only about money.

The deliberate use of propaganda, to murder, should be outlawed.