Smash EDO Take On The Law

Update: A legal observer was arrested on the 16th , and has now been released on bail pending a pre-trial review at Brighton Magistrates court on Thursday 23rd June.

In a spectacular march through Brighton on Saturday June 11th, 150-200 protestors showed that they would not be intimidated by the violence meted out at the May 31 Big Demo at EDO MBM by Sussex police.

After an open mic event on The Level where several protestors spoke out against EDO MBM as well as the draconian Harassment Act interim Injunction brought by the company against peaceful protestors outside their factory, and Sussex Police’s brutality trying to enforce it, the march began. 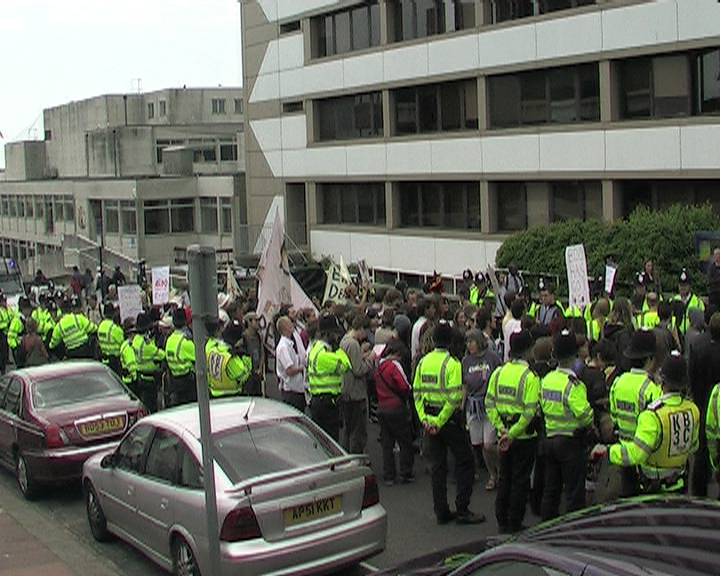 200 anarchists try to report a crime

Arranged on a weekend so that more people could attend, it claimed the streets of Brighton for several hours. The police had said in the previous day’s local press, that they would come out in force to control the demonstrators and make sure they only went where the police wanted them to go. Despite large numbers of demonstrators from a broad range of social and political groups, the police mobilised twice as many police as demonstrators to suppress the march and try to contain it and provoke it as much as possible. Luckily there were no arrests.

An early battle of determination was won by the marchers as a police line blockaded entry to bridge under the main rail station on Trafalgar Street, and tried to direct the march down a small side road in another direction. But this was not to be. Acting as a group the entire march made a decision to demand entry under the tunnel with chants of ‘Let us Through!’ and ‘Whose streets? Our Streets!’. After a recognition by police that marchers would not move till they went the way they wanted, the police gave in and the march moved noisily into the tunnel and up to Queens Road.

Crowd solidarity was good. The police were often aggressive and legal observers noted individual officers numbers who were spoiling for a fight (for future information). Targeting of individual protestors by police snatch squads, (or in one case, by an abusive senior copper), also worked against them, as the march stopped and would not move till all in trouble were out of danger.

The march was then again contained and cordoned off at a junction just beyond the station. Police tactics of stopping and sealing off the crowd for an extended period worked against them here too, as this only created more of a spectacle for passers by to take an interest in and acquire leaflets about EDO MBM and War Crimes. At one stage police were actively trying to prevent marchers from handing members of the public these leaflets, but this only made the public want them even more. The tactic of detention and enforced boredom was not effective on a warm summer day. It made the suppressive intentions of the coppers even more clear to demonstrators, and thus strengthened their collective determination to continue to march.

The main aim of the police was to stop the march reaching the main shopping area around Churchill Square and this they did at the last possible opportunity, but the third and final stand off along Queens Road gave everyone a chance to learn the location of First People Recruitment Ltd, a dodgy employment agency known to supply staff to EDO MBM under false pretences that the company are making civilian use technology. Here a specific leaflet expressing concerns about First People Ltd was ceremoniously delivered to the office.

The march then turned into the busy North Street where it was watched by hundreds of shoppers, and then headed at a snails pace, thanks to police slow motion penning in tactics (which failed to pen everyone in), back across town to the John Street Police Station. This was the intentional destination of the march since the declared purpose was to report evidence of EDO’s complicity in War Crimes and demand a police investigation. Previous approaches to individual coppers had been met with contempt.

Outside the station, penned in by what seemed like a sea of yellow jackets, and riot vans, a senior officer was asked for by the protestors to receive the information. In the meantime the crowd heard from one protestor, who had just then entered into a debate with a cop in the cordon. This officer had just remarked to him that, "cluster bombs were better than other bombs because they were more effective". The directed attentions of the crowd to this policeman’s remarkable support for cluster bombs, was too much for him, and he turned and scuttled away to hide in the police station just behind him, followed by jeers of derision.

At last a senior officer appeared, and who was it but our old friend Superintendent Kevin Moore, commentator for The Argus who had only the previous day said therein, "We will not be investigating them [EDO MBM] for war crimes because that is nonsense."

Now facing the crowd, (and a BBC camera crew) he had to swallow his words and agree in a mealy mouthed way to ‘consider’ the documents he was handed, (cue more jeering from the protestors for this mealy mouthedness). He offered an unsigned receipt as proof of acceptance but refused to give a crime or incident number untill he had read the papers. He said on tape that the footage from the various cameras present, could be used as proof of acceptance of the documents. He also had to admit that he had never read the ICC Act. This may prove to be an obstacle if he is trying to identify crimes which EDO are involved in.

Protestors intend in to follow up the Superintendent’s public statement to consider the evidence against EDO MBM, and provide more details as required.

* EDO MBM are to exhibit at the 46th International Paris Air Show this week 13-19th June.

* A date for the full trial over EDO’s claim for a permanent High Court Civil Injunction Order against all protestors outside the Brighton factory, is expected to be announced by the end of June. Till then the interim injunction remains in place against all demonstrators who might wish to protest ouside the factory.

Section 51.(1) It is an offence against the law of England and Wales for a person to commit genocide, a crime against humanity or a war crime.

Section 55.(1) Meaning of "ancillary offence"(a) aiding, abetting, counseling or procuring the commission of an offence. (d) assisting an offender.

In 55 subsection (1)(a) the reference to aiding, abetting, counselling or procuring is to conduct that in relation to an indictable offence would be punishable under section 8 of the Accessories and Abettors Act 1861 (c. 94).

In 55 subsection (1)(d) the reference to assisting an offender is to conduct that in relation to an arrestable offence would amount to an offence under section 4(1) of the Criminal Law Act 1967 (c. 58).

protestor remanded for breach of injunction on wednesdays noise demo

a protestor was arrested on wednesday afternoon by police who claim he breached the terms of the injunction. this morning several supporters gathered at the law courts in brighton to show support for him and find out if he would get bail. HE HAS BEEN REMANDED TILL THE 23rd OF JUNE after the judge decided that he would obviously commit another offence if he was released. JOIN THE NOISE DEMO TONIGHT TO SUPPORT THE PROTESTOR. Meet at Lewes prison and bring noisy stuff. THE DEMO SHOULD BE FROM 4pm-6pm but please ring 07891 405923 for further details.

Defend the right to protest, defy the injunction, SMASH EDO!!!

You guys rock, keep standing up to the police! They are protecting murderers!!!

meanwhile at the paris air show..

EDO MBM Technology has unveiled the new ultra-light Sabre weapons and payload carriage for unmanned aerial vehicles (UAVs) at the Paris Air Show, and plans to develop a helicopter-borne variant within the next 12 months.

The company is negotiating for flight trials under a UAV before the end of the year. JDW believes the trials will be held in the US.

Land drop tests were completed in the first quarter of 2005 after specification definition work in 2004.

Guard said development was in progress to fit the carriage with a new launch mechanism, which would deploy at 12 ft/sec.

"We are looking at a stored-energy electrical firing system but it is too early to release details," Guard added.

more from paris-Hellfire missiles too expensive too use on toyotas

A draft request for proposals (RfP) is due in July for the US Army's Advanced Precision Kill Weapon System (APKWS) - the successor to the service's cancelled Low Cost Precision Kill (LCPK) programme.

In common with the earlier programme, APKWS has been established to add a semi-active laser guidance capability to the 2.75 in (70 mm) unguided rocket system carried by a range of US Army scout and attack helicopters, including the AH-64D Apache.

The imperative for such a weapon has been driven by two principal demands - both of them lessons learned from operations in Iraq. Warfighters believe that a guided 2.75 in, helicopter-fired rocket would be far better suited to urban combat conditions than a heavier, precision-guided missile such as Hellfire. It would also be considerably cheaper.

"In the urban environment today, the options for precision fires are not broad," one industry official said at the Paris Air Show. "You're not going to shoot a Hellfire into downtown Baghdad or at a moving target such as a truck." In the cost-versus-kill equation, US Army commanders are reluctant to fire a $100,000 weapon such as Hellfire at a $25,000 Toyota pick-up operated by insurgents.